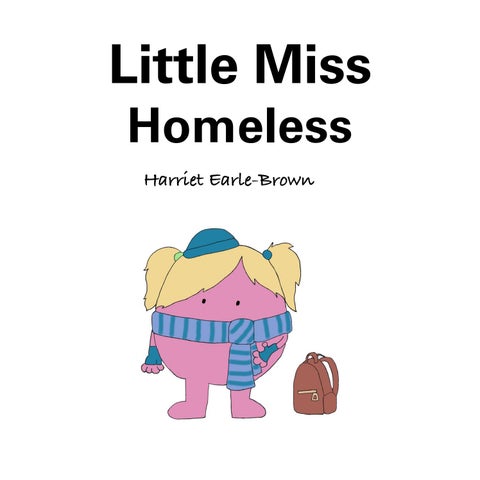 NOT INTENDED FOR CHILDREN

This is not a children's book. The content in this book is not appropriate for younger audiences. Please note some of the content might be distressing for some readers.

Written and Illustrated by Harriet Earle-Brown Inspired by the Mr. Men and Little Miss series by Roger Hargraves.

Disclaimer: This book uses existing work to draw attention to or comment upon a particular social phenomenon or issue (homelessness). It is an unofficial parody of the Mr Men and Little Miss Series and is not endorsed by them. It is not for sale and should not be sold by third parties. For further questions relating to copyright, please contact: harriet.earle-brown@outlook.com

This is Little Miss Homeless. She is one of the many homeless women in the UK. She has all her belongings in a backpack and a special stripy scarf that her mum gave her before she passed away.

Little Miss Homeless used to have a home. It was a lovely home with cherry print curtains and an apple tree. However, she had to leave her home because of domestic violence. Over the years of abuse her partner had forced her to cut ties with all her friends. She tried to get some help from the council, but they said they couldnâ&#x20AC;&#x2122;t help because sheâ&#x20AC;&#x2122;d made herself intentionally homeless. Little Miss Homeless had nowhere to stay.

Little Miss Homeless tried to stay in a night shelter. It was warm and dry and there was always a hot meal. But it was full of men and she found them very scary, so decided to avoid the shelter.

She tried sleeping on the streets, snuggling up in a sleeping bag in a shop doorway. However, because she was on her own, she was vulnerable. She was assaulted, robbed and raped.

Instead, Little Miss Homeless sleeps in quiet, hidden spaces where no one can find her- which sadly includes the people who want to help.

This means she doesnâ&#x20AC;&#x2122;t get access to important services, such as healthcare. Little Miss Homeless often gets ill.

Little Miss Homeless hates having no where private to shower, dress and use the toilet. Sometimes she will go to a homeless charitybut they are only open for a few hours each day. Most of the time she uses public toilets- the sinks arenâ&#x20AC;&#x2122;t very nice, but she doesnâ&#x20AC;&#x2122;t have much choice. However, they get locked at night, so she has nowhere to go to the toilet. This is especially challenging when she has her period. Sometimes she has to change her tampon in a bush in the park.

Not being able to wash properly means people arenâ&#x20AC;&#x2122;t always very nice to Little Miss Homeless. It upsets her when people look down on her as they walk by or call her nasty things. She dreads weekends where people get nastier after a few drinks.

When little Miss Homeless first became homeless, other people took advantage of her. She couldnâ&#x20AC;&#x2122;t work out who was being nice and who had alternative motives. One older woman suggested little Miss Homeless try heroin with her and her friends. One man kept asking her to be his â&#x20AC;&#x2DC;girlfriendâ&#x20AC;&#x2122;, offering to protect her if she slept with him. Another man said if she paid for the alcohol, she could hang out with him and his group of friends.

Little Miss Homeless does not like being homeless but doesnâ&#x20AC;&#x2122;t know where to go for help. Lots of homeless services are tailored to men, which means that Little Miss Homeless rarely gets the help she needs. There used to be a women only service, but it lost its funding.

Therefore, Little Miss Homeless falls through the net and stays on the streets. She begs when she can, although she feels embarrassed asking strangers for money. 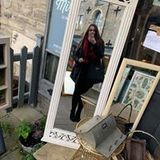