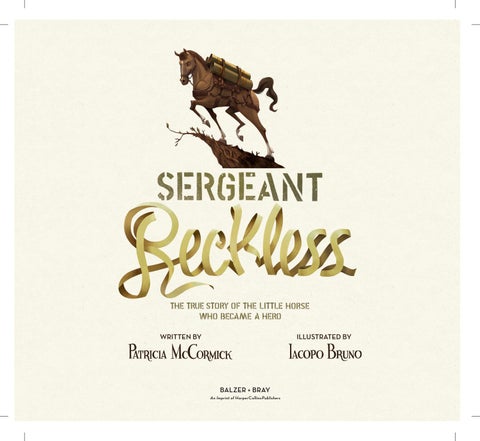 was at war. Towns a re Ko t Bu er. pp su r he for ied inn he small red mare wh was abandoned. k rac et rac e th d An . ed ch or sc re we were shattered. Fields little horse. No one paid attention to the hungry

Nearby, U.S. Marines were exhausted from hauling heavy ammunition uphill to a powerful new cannon nicknamed the “reckless” rifle. That’s when their leader, Lt. Eric Pedersen, had an idea. What if he could get a mule to carry the shells? But all Lt. Pedersen could find was a scrawny sorrel mare with a white blaze and three matching socks. She wasn’t much, but she reminded him of a horse he’d had as a boy, so he took a chance on her.

Back at the base, as the marines gathered around to meet the new recruit, Lt. Pedersen realized heâ&amp;#x20AC;&amp;#x2122;d forgotten to buy hay. One of the men held out a piece of bread. The mare gobbled it up.

Then she devoured the rest of the loaf. Another man offered her some oatmeal. She licked the bowl clean.

She was pretty, the marines agreed, but she was small. How could she carry such heavy ammunition? And how would she react when she heard the thunder of the cannon? A mule was slow and steady, but a racehorse was high-strung and skittish. She’d have to go through special training—and she’d start out at the same rank as any newbie: private. Private Reckless.

The inspiring true story of Reckless, the brave little mare that became a marine. This is the first picture book from award-winning novelist Patricia McCormick, sumptuously illustrated by acclaimed artist Iacopo Bruno.