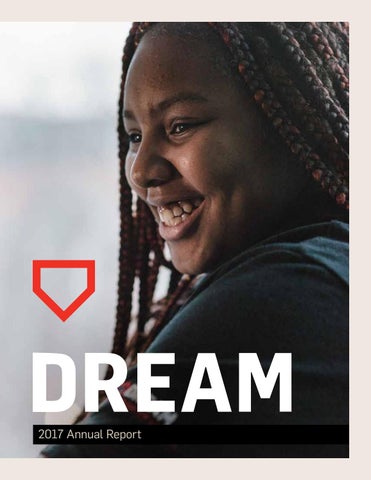 Will I be a scientist? An inventor?

harder and become a better person. I know I will be important and help society.

summer, resulting in 100% of participants

ribbon on our second Field of Dreams—

their books, put on their jerseys, and gave

this time, in the South Bronx. Our DREAM

their best in the classrooms and on the fields.

seniors graduated from high school and

district, city, and state in both ELA and

matriculated into college. At our newest

site in Newark, our K–1 students spent over

We have much more to share in these coming pages and we’re excited for you to meet some incredible members of the DREAM family who represent our work in action.

This is why we DREAM. Thank you. The amazing work that goes on in our classrooms and programs in East Harlem, the South Bronx, and Newark, is fueled by your support and belief in

Year after year, we continue to grow— not for growth’s sake—but to embrace and pursue our mission, and to provide more opportunities for young people to recognize

our mission. We’re grateful for another amazing year powered by you. Thank you and onward!

their potential and realize their dreams. Vik Sawhney,

Chairman of the Board, DREAM

MISSION DREAM’s mission is to provide inner-city youth with opportunities to Play, Learn, and Grow. We use the power of teams to coach, teach, and inspire youth to recognize their potential and realize their dreams. DREAM youth play on ball fields, playgrounds, and gyms. They learn how to think critically, ask hard questions, and self-advocate—in and out of school. And they grow with teammates, classmates, teachers, and coaches— all year long. DREAM youth are competent, confident, and caring individuals who will make a positive difference in the world.

of seniors have graduated from high school.

of seniors have gained college acceptance.

of youth who graduated high school as DREAM participants have graduated college or are currently enrolled in college. *59% of undergraduate students in the U.S., who began in 2009, completed a bachelorâ&amp;#x20AC;&amp;#x2122;s degree at that institution within 6 years. (U.S. Department of Education, National Center for Education Statistics)

% at or above proficiency

ENGLISH LANGUAGE ARTS % at or above proficiency

DREAM works with 2,200 youth each year through a comprehensive program model that engages them all day and all year long so that they become competent, confident, and caring adults who will make a difference in the world. Pre-K

Elementary School Elementary scholars work with two teachers in every class and receive extensive support, ensuring that scholars at all levels learn and thrive in a positive environment.

Elementary and middle school students outperformed the district, city, and state in New York State ELA and Math tests in 2017.

99% of TeamBuilders were on track to high school graduation.

Rookies learn the basics of baseball and the power of teamwork.

100% of seniors graduated from high school and 100% went to college.

PLAY In baseball, you set your own limits.

People try to place limits on kids like me about how far we can go, especially in my community. But in baseball, you create your own floor and your own ceiling. I play to become a better player

and a better person. I play to succeed because that means my teammates succeed. I play for social justice and education reform. It’s bigger than me.

I want people to see the world beyond themselves. That’s why I love to write. At DREAM, I learn about history and current events, and I channel what I learn into my writing, whether it’s a play about immigration for my

literature class, or an essay on the healthcare debate. There is power in writing, and I am eager to discover how I can harness that power and use it to make an impact.

GROW I want to be a neurosurgeon.

I know high school will be hard and college will be even harder. And then, there’s medical school. But I won’t give up. When you have a dream, it shows what your purpose is and what you are working toward. At DREAM, I learn to build a mindset to persevere. I will become a neurosurgeon.

COACH For one, I learn cool lingo that keeps me young.

But I coach to win—and I’m not just talking about games. That moment when a kid catches the ball for the first time or when he nails down a math concept— that’s what I call a victory.

If you want to move the needle in a community and in the arc of a young person’s life, you volunteer at DREAM.

TEACH It’s endless work but it’s worth it.

I don’t look for perfect students. Bring me the kids who don’t want to learn. My dream is to raise them into confident students who believe they can become better each day. I want my kids

to invest in their own growth as learners, thinkers, and change makers so that they can develop deep passions and interests to pursue.

WHAT’S AHEAD Over the past 27 years, DREAM has

Our dream is to provide each and

expanded and evolved to meet the needs

every single young person who

of the communities we serve. We dug our

walks through our doors with equal

roots a little deeper each year to tackle the

opportunity to reach their potential.

most difficult barriers our children face:

We want to engage the whole child by

educational inequality, lack of health and

investing more deeply in their physical and

academic achievement, and their ability to

self-advocate—all to ensure they graduate

But we’re far from done. With the lessons

from college prepared to lead happy,

we’ve learned thus far, we will continue to

We’re excited for what’s ahead and look

our work in a seamless, intentional, and

forward to providing even more youth the

chance to realize their dreams with us.

DREAM is proud to report another year of strong support from our amazing donors who enabled us to serve more youth than ever before. As we look ahead toward growth and deeper involvement in our communities, we remain committed to fiscal prudence to ensure sustainability and high-quality programming for every youth and family we serve.

IN MILLIONS OF DOLLARS

IN MILLIONS OF DOLLARS

In- and Out-of-School Combined IN MILLIONS OF DOLLARS

In- and Out-of-School Combined INCOME

GIVE We give to DREAM

because you see results.

DREAM kids get amazing opportunities to succeed, making their way from elementary school all the way through college. They are surrounded by awesome

people who support and believe in them, and we want to be a part of that team. And, we give because of the big smiles on every kid we meet. What could be better than that?

OUR GRADUATES CONGRATULATIONS TO THE CLASS OF 2017

DREAM BOARD OF DIRECTORS Chair

Printing graciously provided by Donnelley Financial Solutions who make it possible for the children of DREAM to play, learn, and grow. Creative direction and graphic design by Petting Zoo. Photography by Patrick Kolts. 28

YOU CAN CHANGE THE GAME. Coach. Teach. Inspire. Find your place on the DREAM team. VISIT us. Stop by our Field of Dreams,

program spaces, and classrooms to meet our incredible kids.

VOLUNTEER. Our volunteers are key to the success of every kid at DREAM. Make a positive and lasting impact in their lives. Email volunteer@wearedream.org. SPONSOR your own team. Ready for the championship? Sponsor a team and provide our kids with jerseys, coaching, equipment, and more.

Become a CORPORATE PARTNER. We’ll work with you to figure out the best opportunity for your group, whether it’s hosting a softball tournament, sponsoring one of our events, or becoming a career mentor.

Twitter and Instagram @wearedream. You’ll be the first to see updates directly from the field and classrooms. 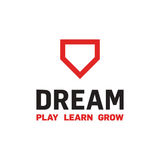