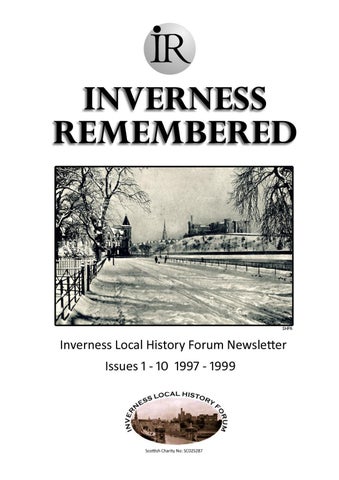 NEWSLETTER Local History Forum. Inverness Remembered. Project foundation mission statement from the early 1990s. THE INVERNESS REMEMBERED project was formed several years ago under the auspices of the Local History Forum as part of the services run by the Workers Education Association (WEA). The aim of the project was to gather in as much as possible of the local history of the old Burgh of Inverness in this century. It was realised that much of the town’s character had changed considerably, especially after the war, and many of the old buildings, streets and communities had gone forever. A great deal of the knowledge and memories of these times were only to be found by speaking to the people of the town who had grown up and lived and worked in the earlier part of this century as citizens of the Burgh. It was also clear that there was a great deal of local interest in reviving and recalling information whilst there were still people who could provide the stories and recollect the way things were when they were young and give background information to make a complete historical picture. As the end of the century approaches, the Inverness Remembered committee members have set themselves the task of gathering together from a variety of sources as much information as there is obtainable, and the objective is that by the year 2000, Inverness will be available as a public facility to citizens, visitors, students, historians or indeed anybody and everybody who has an interest. This can only be done by the hard work of our volunteers and Committee who have been busy doing tape recordings of stories

from “old Invernessians”, transcribing the tapes, researching the history of old town centre streets, the families who lived there, the communities which were once selfcontained, but have now merged into the ever expanding town boundaries. Without their generous commitment to the project, so much of value to the enrichment of the town’s history would go untold and their input is much appreciated. So that is where we are, and perhaps a little bit of what we are hoping to achieve in the next few years will encourage others to contribute. We intend running regular reminiscence sessions in the Museum, and this is explained more fully elsewhere. The Library is a treasure trove of information for those who wish to do some research, either on an individual basis or as a group. Staff are available to give help and advice in the reference room and the evenings for activities related to the project. Norman Newton, the librarian, can give further information. The Archivist’s Department, also in the Library Buildings, and headed by Mr. Robert Steward is also a gold mine for anyone doing research. Again, help and advice is available. With the local resources which are available, particularly the human ones, we have great potential to create something very special for our town. If you are interested in our project, of participating in any way, or would like more information, please get in touch and let us know what you would like to do to help.