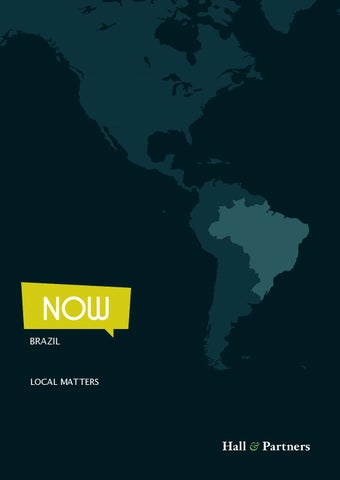 We explore beyond individual desires and

needs, to understand cultural context and the

However, this can be an illusion. What people do, think and feel within their own environment and culture can be vastly different, often in surprising ways. We help our clients build relationships that really matter to people, wherever they are.

power of social influence and uncover what really matters locally. We watch what people do and delve deeper into what they feel and think. Only then can we build the most vivid picture of what matters to people. With all eyes on Brazil in anticipation of the 2014 World Cup and 2016 Olympics, there

We recognize that digital technology is

is no better time than now for brands to be

transforming the way we all experience and

interact with brands, allowing people to

what matters to Brazilians in a defining

moment for the country.

WHAT WE SEE Brazil is an emerging power, with millions of new middle class consumers. The growth extends right across the country, beyond its famous two cities of S達o Paulo and Rio de Janeiro, resulting in tremendous opportunity for brands willing to expand. There is also a new, growing, rich class in the country, driving a further appetite for luxury among this already fashion-forward society.

Their young population is also shaping the way people think about consumption in Brazil. They have access to more information and are demanding more - higher quality service, better products and fair prices, while retaining their strong sense of nationality. The resulting cultural fusion is a natural offshoot of this.

With a sexy, party-loving reputation, Brazilians have become global broadcasters of their happiness and life through a strong presence on social media, and the Internet is further driving leisure and consumption among these digital pioneers.

The 2014 World Cup and the 2016 Olympic Games will increase the exposure of the cool, happy Brazil.

These new consumers are willing to buy

discovered. It is the fifth largest country in the

clothes, electronics, cars and even luxury

goods so they can improve their standards

and almost three times the size of India. With

of life. Companies are already focusing on

the seventh biggest economy, it is a country

this new market with brands such as NestlĂŠ

and PepsiCo having created products that

are adapted to the taste of the Class C, the

Inequality and poverty are perhaps a couple of the biggest threats after the Global Financial Crisis. Brazil has been working hard to combat these challenges and develop its economy, while bringing millions of people out of poverty and into a New Middle Class of consumers - a group with more people than the entire population of the United Kingdom.

New Middle Class, with sub-brands that offer cheaper products. Global airlines have started to offer plane tickets to be paid in several instalments on credit cards as part of the market tradition in Brazil, where the Class C usually pay for everything in instalments.

Number of Brazilians in the New

Middle Class: Growth from 2009 to today and its projection for 2016

So what? A rapid increase in socioeconomic inclusion creates opportunities for brands that focus on the needs of a new class looking for a better standard of life. This is important for brands that can demonstrate a social mission and commitment to helping consumers thrive.

be associated with poverty and backwardness,

are symbols of Brazil to the world, but

consumption accounted for more than US$

the country has gone through a national

transformation, with growth of cities and

before2. More than 20 new shopping centres

development of markets in all of its regions.

will be inaugurated in the region until 20183.

Brazil is increasingly urban, with population over one million in 16 of its cities, and more than two-thirds of the country live out of the famous cities of Rio de Janeiro and SĂŁo Paulo. These people living in five disparate regions want to have access to goods and want to be recognised as Brazilians with their own local culture. The national growth in consumption and the market of luxury goods has been spreading in different parts of the country. In the Northeast of Brazil, which used to

Important metropolitan regions such as Belo Horizonte, BrasĂ­lia, Curitiba and Recife have become focus of investment in the market of luxury goods, with brands like Tiffany & Co., Prada and Diesel opening stores there.

THE APPETITE FOR LUXURY At the same time, there is a new, growing,

which is close to US$10 billion a year. Luxury

rich class in the country. About 27 million

people have become part of the highest social

classes in Brazil in the past 5 years - that’s

Missoni and Christian Louboutin have recently

more than the population of Australia.

Brazil has the 12th most millionaires in the world, a group of 194,000 people that is

expected to continue in accelerated growth,

One of the main symbols of this is the

with another 46 new millionaires per day. The

larger than New York and Tokyo - with 411

aircraft registered and an average of 2,200

The increase in number of wealthy Brazilians brings a new impulse to luxury consumption,

FLYING HIGH SĂŁo Paulo is the city with the worldâ&#x20AC;&#x2122;s largest helicopter fleet

So what? The development of new markets in different Brazilian cities offers opportunities for global brands willing to expand. In particular, there is a growing appetite for luxury goods amongst the increasing number of wealthy Brazilians.

DEMANDING MORE Brazil is a young country preparing itself for

Brazilians are tired of paying more than other

countries for the same products, and that is

one reason why price comparison websites

are especially popular in the country. Global

educated, and more connected, with greater

material and service needs. The rise of the

when they offer good products for prices

new Millennial generation is changing the

lower than the national average. This could be

way people think about consumption, with

seen in 2014, when fashion retailer Forever

21 opened its first store in Brazil with prices lower than average and sold in 24 days what it planned to sell over three months6.

of Brazilians are under 30 years old8

more than in the US10

country. Local is so important that there

quality products - from both global and

national brands - resulting in a cultural

who have created a meal with rice, beans

fusion. However, more than eight out of

and burgers to adapt its menu to the local

taste in Brazil, where rice and beans are the

international ones speaking to the pride in

staple meal of the country.

As Brazil raises its profile on the

The strong sense of nationality exists

world stage, Millennials in the country

everywhere, and Brazilian pride in their

acknowledge that there is work to be done

country and their multicultural heritage

at home before their country can become

can be seen in their online presence and in

a world leader. There is a lot of pride in

the colours of the national flag all over the

Brazil, and nine out of ten Brazilians say it is time to make a mark on the world.

So what? The large, highly connected Millennial population in Brazil is demanding quality and fair prices. Brands need to customize their products to cater to local needs, while also keeping in mind Brazilian sensibilities and pride. Maintaining competitive pricing is critical, while tapping into the increase in cultural fusion is a real opportunity in this environment.

Place of Brazil in a survey over happiness on Instagram11

The highly interpersonal culture of Brazil,

With their strong presence on social media,

which stresses social connections, is the

key reason it has been called the ‘social

of the life in the country.

media capital of the universe’. Brazilians love technology and spend on average 32.5 hours per month online, only 3.7 hours less than the Americans and 41% more than the Chinese12. Digital means are great for showcasing their pride and status to each other and the world.

Carnival, football, beaches and bikinis are all global symbols of happiness and the ‘cool lifestyle’ in the country, and millions of tourists travel to Rio de Janeiro and other cities searching for that happiness. Important global events such as the World Cup and the 2016 Olympic Games, along with non-stop

About eight out of ten young Brazilians are

growth in the use of the internet, all have

the power to increase the exposure of the

users in the country spending 535 minutes on

the social network every month13.

HAPPY BRAZIL ‘Felicidade’ (happiness) and ‘Beleza’ (beauty) are both seen as positive social expressions, and Brazil owns this space socially

MofaIronica @JoshDevineDrums Happiness is here in Brazil, please come back soon. We love you xo xo  RT @Aline_Chaienne @iamsrk Be happy without reason is the truest form of happiness #Brazil#Fan #LoveYou  http://t.co/IKOY0hKRAa  morolandmorolan The Way to Happiness in Brazil  http://t.co/CWH43y5zs1   14. www.sysomos.com 20

#48daystogo till the Brazil government

deadlines and will be held

With more than half of the population online,

Brazil casts itself as a defender of Internet

freedom with the 2014 implementation of the

Brazilians are already searching for products,

the principle of net neutrality, ensuring that

and fashion items. Global companies on the

and freedom of expression.

personalised websites to offer products to the Brazilian market.

So what? The strong adaption of digital media is a huge opportunity for brands. Brazilians love to broadcast stories and become influential brand advocates through their social media activities. There is also a big opportunity for brands to offer online marketplaces â&#x20AC;&#x201C; particularly for those who provide access to global brands and competitive offers. The 2014 World Cup and the 2016 Olympics amplify opportunities for global brands looking to make their entry.

SO WHAT MATTERS FOR BRANDS? A rapid increase in socioeconomic inclusion creates opportunities for brands that focus on the needs of a new class looking for a better standard of life. The development of new markets in different Brazilian cities offers opportunities for global brands willing to expand. The increase in number of wealthy Brazilians brings a growing appetite for luxury goods. The large, highly connected Millennial population in Brazil is demanding quality and fair prices. Brands need to customize their products to cater to local needs, while also keeping in mind Brazilian sensibilities and pride. Brazilians love to broadcast stories and become influential brand advocates through their social media activities. There is a big opportunity for brands to offer online marketplaces â&#x20AC;&#x201C; access to global brands at competitive offers. The 2014 World Cup and the 2016 Olympics amplify opportunities for global brands looking to make their entry.

Find out more » To learn more about Brazil Now, please get in touch: 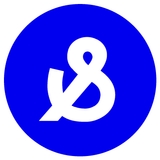