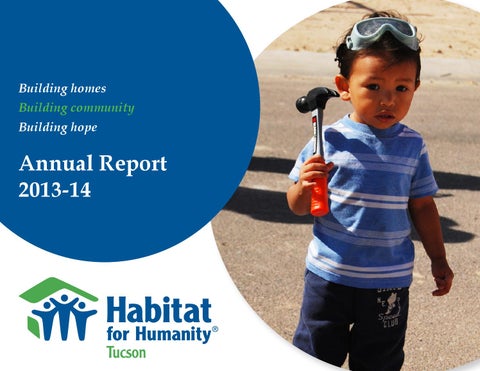 This is your Habitat At Habitat for Humanity Tucson, we are committed to creating a more compassionate and just world by bringing people together to build homes, communities, and hope. Our success in 2013-2014 is a direct result of the amazing support we received from you and our Southern Arizona community. This year, Habitat Tucson touched more lives and ensured that more of our neighbors live in safe, decent, affordable homes in thriving neighborhoods than ever before.

• We ended the fiscal year in a strong financial position under the guidance of a new CEO, T. VanHook, and a new COO, Gordon Yarrington. Together with all of the staff, they are honored to be serving our amazing communities. we will

Together, empower residents to lift themselves and their neighbors up to improve the quality of life for our entire Southern Arizona community.

Thanks to your generous partnership, we constructed 15 new homes, rehabilitated 3 substandard houses, performed 10 critical home repairs and completed 26 A Brush with Kindness projects allowing us to serve nearly 200 individuals throughout the region! During 2013-2014:

• We partnered with Copper Vista residents on a number of major projects that resulted in increasing safety and reducing crime in the neighborhood. Residents who once asked, “Why build here, why invest in this neighborhood?” now say “Our neighborhood is improving. What more can we do together?” • We completed a Veteran “Home Swap” in Sahuarita, swapping the family’s old 2 Habitat for Humanity Tucson

manufactured home that was beyond repair with a new one donated specifically to assist a veteran family.

In the pages that follow, you will learn of even more of our work. We are so happy to share all of our successes with you!

Habitat Tucson – with your help – will continue to build community partnerships, engage volunteers and work strategically to alleviate substandard housing. Together, we will empower residents to lift themselves and their neighbors up to improve the quality of life for our entire community! Thank you for joining with us to restore hope to communities, and partnering to build a brighter future! We can’t wait to see what we all build together in the years to come.

ONE YEAR OF BUILDING TOGETHER At a glance numbers of Habitat Tucsonâ&#x20AC;&#x2122;s impact.

by volunteers to give a hand-up for families in need

500,000 pounds of building material kept from landfills by the HabiStore

Veronica Aguilar puts the first nail in her new home in Marana. Veronica, her daughter and her two brothers moved into their home the following June.

The homes are built one at a time, but ultimately, Habitat builds communities, aiming to improve the lives of everyone in the neighborhood. 4 Habitat for Humanity Tucson

Johnson Leopoldo and Rose Salvestro lived for 15 years in a refugee camp in Ethopia before immigrating to the United States. In May 2014, these naturalized citizens and their children moved into a permanent home with room to grow and thrive. Could that smile on their daugher be bigger? The Leopoldo family was one of 13 who moved into new homes in 2013-14.

I was praying for a long time for something good to happen to me and my girls. Sara Lujan, mother of three, and new Habitat Homeowner in 2014

Group builds, such as this one with Carondelet Health Network, are an opportunity for corporate and faith groups to give back to their community in a tangible way.

More than 2,380 volunteers – from churches and community groups to individual partners – worked together to make our homeowners’ dreams come true.

A Brush with Kindness, helps those in need with minor repairs and improvements to home exteriors, allowing them to live in safe, decent homes and restoring hope and pride to the neighborhood. In September 2013, a group from Campus Christian Ministries built stairs, repaired skirting and painted this home.

The HabiStore celebrated an incredible milestone in 2014, reaching $1 million in sales for the first time in its history. About 17 percent of Habitat Tucson’s revenue is generated by the HabiStore.

It used to be weirdos and criminals walking around. Now it’s families.

Habitat Tucson gave Gabriel and Elizabeth Barreda the hope of moving out of a mold-covered crumbling structure, where they woke more than once to electrical fires. A critical home repair request turned into so much more when an anonymous supporter donated a manufactured home to help a veteran. Gabriel Barreda, a disabled Vietnam vet, was the perfect choice. Thanks to help from Blue Cross Blue Shield of Southern Arizona, the Barredas moved into a safe, healthy home in May 2014.

Copper Vista neighborhood resident, about the effect Habitat Tucson’s partnership has on the area. When the Faith in Action group cleaned up an overgrown, trash-strewn lot, neighbors in Copper Vista saw a drop in criminal activitity. Habitat’s Neighborhood Partnership reaches beyond its homeowners to build relationships, empower residents and revitalize the areas for all who live there!

Building homes Building community Building hope Suzana Manzo (left) and her daughters moved into their new home in Copper Vista in February 2014. Her girls were among 30 children who now live in safe, permanent homes.

*For a complete list of donors, view our annual report online at HabitatTucson.org. We have made every effort to ensure the accuracy of this list. If we have made an error, please accept our apology and let us know so we can correct it. 8 Habitat for Humanity Tucson

Sustaining donors, such as Margaret Maxwell, collectively contribute more than $2,000 every month.

What will you build with us? 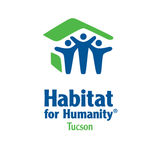