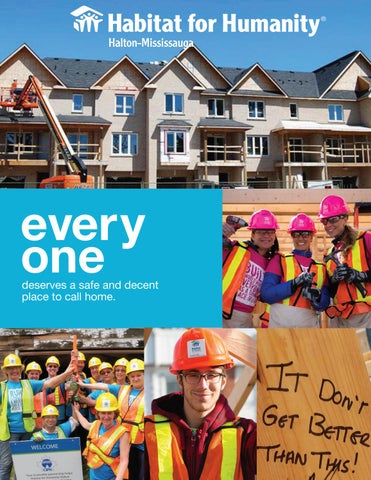 every home changes the lives of a family for generations to come.

After more than two years, over 23,288 volunteer hours, 974 lunches, 5142 cups of coffee and 35,000 bricks laid, we`re very excited to welcome home the 13 hard-working families that will soon call de Jong Lane their home! Not only was the build project Habitat for Humanity Halton-Mississauga`s largest build to date, this new town home complex on the corner of Plains Road East and Glendor Avenue in Burlington has been an excellent example of what we can achieve when we think outside the box, dream big and work hard to build a world where everyone had a safe and decent place to live, no matter what challenges stand in the way. When we kicked off the project in March of 2014 with our presenting partner, the Canadian Institute of Plumbing and Heating (CIPH), we knew that this project would be Habitat’s ﬁrst step towards growing to meet the unmet demand for affordable housing in our community. Not only did we rely on our dedicated and passionate Crew Leaders and Crew Members for their expertise, including Jeff Nugent, Rick

Sirisko, John Hall, Jenny Bax and Tom McFadden to name a few, but we also invested a total of $3.4 million dollars to make this dream a reality for our families. This, of course, is solely thanks to the generous contributions of partners like CIPH, all of our corporate Adopt-A-Day partners and donations (both monetary donations and gift-in-kind donations of products or services) from local corporations and members of our community who wanted to give back to the families who need it most. To each and every person who helped to make today a reality, whether you picked up a hammer to help or you donated to the project in any way, Habitat for Humanity HaltonMississauga and our newest Habitat families thank you from the bottom of our hearts. You are the reason that we can continue to grow and expand to help more families than we’ve ever helped before. By giving these families a hand-up, we’re working together to change the lives of these families and more for generations to come.

looking forward to 2017 and beyond

of Peel, will renovate a town home that will mean a fresh start for the Sakki family and their 4 children.

As we close one chapter of our story, we’re quickly moving on to over 6 build projects in 2017 that will give 32 more families the opportunity to live in safe, decent and affordable housing. •

The Malton build project, in partnership with the City of Mississauga and the Region of Peel, will create at least 4 more homes for families in North Mississauga.

The Exchange Hotel build project will be our most expensive and most difﬁcult build thus far, involving the relocation of the original hotel structure back on the property to allow for an additional 4 town homes to be built that will serve 5 families in Georgetown.

The Goetz Landing build project, which will be our largest project thus far, on Queensway Drive in Burlington will see up to 18 units built for local families in need of a safe and affordable place to live.

This is the perfect time to get involved with our next projects. Whether you want to swing a hammer or not, there are lots of ways to make a difference in the lives of families in need. Upcoming projects include: •

For more information about each of our new builds and to get involved today, please visit habitatbuild.ca

honouring a legend It only takes one drop of water to cause a ripple. And quite often, it only takes the action of one individual to set the course for lasting change in our community through the efforts of those that follow them. Former Chairman of the Canadian Institute of Plumbing & Heating (CIPH), Mr. Case de Jong, is one such individual. A committed volunteer and advocate for Habitat since 1993, his dedication to community service has sparked a movement within their board and 260 member companies that has changed the lives of countless families in need in Halton and Mississauga, and across Canada. On November 5th, 2015 CIPH members, community volunteers and Habitat for Humanity staff gathered to recognize Mr. de Jong. In a special ceremony, the 13 town home complex in Burlington was ofﬁcially named DE JONG LANE so that future generations could recall his commitment and dedication to building change in our community. “In 1993, it was the CIPH Board’s vision to align the association with a charity

that would tie in with the philosophy of building, renovations, while at the same time providing hope,” explained Ralph Suppa, President & General Manager of CIPH. “That vision was championed by Case. Since 1994, CIPH members have contributed more than $10 million dollars in cash and products to Habitat, and this year, under the leadership of Gail Kaufman (Wolseley Canada), CIPH has set a goal of raising $2 million dollars in product and cash for which $1.7 million has been raised to date. Because of Case’s vision, the support of our Board and our members generous contributions, CIPH has helped sponsor homes in Niagara Falls, Winnipeg, Moncton, Charlottetown, Montreal, Regina, St. John’s Newfoundland, Victoria, Ottawa Carleton, and our 10th and most ambitious sponsored build is right here. “We ﬁrmly believe in a hand up and not a handout. This 13 unit home build complex is the start of a new life for the Habitat families where they can feel safe and the children can grow up with pride and dignity. I am proud to say that CIPH and

its members take a leadership role in addressing the need for affordable housing by providing modern hot water heating and plumbing products to over 250 Habitat for Humanity homes each year.” We are thrilled to have the support of local community legends like Mr. de Jong and the members and board of CIPH. With their help and support, we’re giving 13 families a fresh start in life. And with the great example set by Mr. de Jong, we hope that our combined efforts will have a ripple effect on all who visit or reside on DE JONG LANE, showing them that they can make a difference in their community and change the lives of families forever.

YOU DON’T HAVE TO LIFT A HAMMER TO HELP!

Visit HABITATBUILD.CA to make a donation and build hope today.

All Types of Masonry Work. Specializing in Brick & Stone!

T.R.A.C.K. Waco Drywall We Are One World

for more information about our partners and how you can change lives in our community, visit habitatthankyou.ca

for more information about how you can change lives in our community, visit habitathm.ca

for more information about how you can change lives in our community, visit habitathm.ca 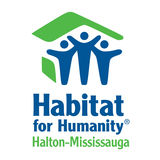 On Saturday, December 10th, Habitat families, volunteers, donors, local dignitaries, and members of the community bundled up to brave the co...

On Saturday, December 10th, Habitat families, volunteers, donors, local dignitaries, and members of the community bundled up to brave the co...