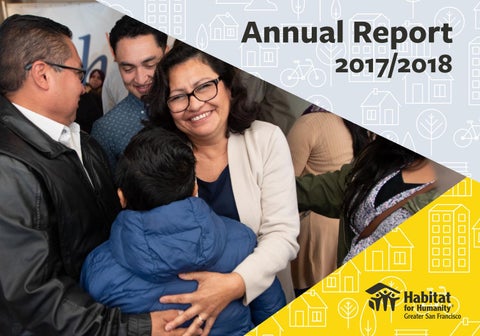 Friends and Supporters of Habitat Greater San Francisco: The past 12 months have been an amazing time for our organization. Our pipeline of new projects has never been stronger and we have recently received several new seven-figure grants in order to expand our mission. As importantly, the housing crisis in the Bay Area and the critical need for affordable homeownership opportunities is now finally being recognized by our broader community including community leaders, politicians, grant-makers and the press. The critical need for affordable housing is front page news! Just as this annual report was going to press, we had the privilege of hosting a Habitat homeowner dedication ceremony for six families. We, along with many of our supporters, congratulated them on realizing their dream of homeownership. We also reflected upon the importance of this milestone in building these families’ futures and the futures of generations to come. These profound moments remind us of why we do what we do. They reaffirm the importance of our mission to expand the promise of homeownership across our region and meaningfully address the housing and affordability crisis, which puts many at risk of displacement. It is an exciting time for Habitat for Humanity Greater San Francisco. We are poised to break ground on two sites in Redwood City and Daly City. In addition to these developments, our pipeline includes a project in San Francisco’s

Diamond Heights neighborhood, as well as an opportunity for homebuilding in Marin County. As you will read in this report, our ability to advocate on behalf of our homeowners and our region’s “missing middle” is stronger than ever. Our voice on housing and development issues is heard in our State’s Capitol, and across our region. We are acknowledged as a leading commentator on the impact of the 1970s-era California Environmental Quality Act on the ability to build affordable developments. We are pleased to report, on behalf of the board, that Habitat for Humanity Greater San Francisco is on a sound financial footing. As you will see from the audited financial data in this report, we are well supported to build new homes and sustain existing and new homeownership opportunities. Developing and constructing new affordable homes is a complex endeavor—one that can only be accomplished by marshalling the support of our donors, volunteers, neighbors and local authorities. We are deeply grateful for your support this year and we look forward to welcoming you at a Habitat building site in the months ahead. Sincerely,

Building New Homes Habitat’s heart is in homebuilding. From transit-oriented condominiums in the heart of a city, to single-family homes in the suburbs, Habitat homes receive plaudits for their quality, design, and green credentials. They are a haven for working families and a secure place to raise the next generation. Andrea and her three children moved into their new home at Mt Burdell Place, Novato in late 2017. She was living month-to-month in a small apartment, with an electrical system that could not handle even a portable air conditioning unit. The family would frequently stay at friends’ homes so the children could sleep during summer. “It was a really horrible feeling as a single parent to know that we could be kicked out at any time,” she says. Andrea was speechless when she found out that her Habitat application was successful. “Never in a million years did I think I would be able to buy a home in the Bay Area.” As all Habitat homeowners do, she completed 500 hours of sweat equity working in partnership with Habitat volunteers and our professional construction staff to build her home. “My home means stability,” Andrea says. “I know that my children have a home to grow up in and don’t have to shuffle around every year.”

Creating Homeownership Opportunities Habitat extends the promise of homeownership to hardworking households in the “missing middle”—those whose incomes fall in the 40%-80% bracket and who are significantly affected by our region’s housing and affordability crisis. Our model provides first-time homebuyers with a chance to own a home with no down payment and housing costs capped at no more than 30% of household income. Homeownership unlocks a family’s potential. Across our region, our measurement data demonstrates that Habitat families see their children do better in school, save more for the future, and are more involved with community life.

“Being homeowners has changed our lives. And it has given us the opportunity to save a little more money for what the family needs—like being able to send my daughters to college.”

Making Critical Home Repairs The Bay Area’s housing and affordability crisis forces many families to leave the region. Our critical home repair program serves homeowners—often seniors on fixed incomes— to keep them in the communities they love. We bring together the power of thousands of volunteers each year to undertake repairs that keep residents warm, dry, safe, and able to maintain the value of their home. Five years ago, Bayview resident Rosa lost her husband to lung cancer, just 10 days after his diagnosis. They raised three children—and a niece and nephew—in their home of over 16 years. Before long, she says, the number of needed repairs grew and the house required the type of work that is out of reach for many homeowners on limited incomes. Habitat installed insulation in the attic and walls, replaced three windows, fixed fencing around the home, and made a number of safety improvements. “It was reaching a point where we would have to move out—and we would not have been able to afford to stay in the Bay Area,” Rosa says. “I’m so thankful for Habitat’s home repair program.” Rosa’s neighborhood, which has the lowest per capita income in San Francisco, is one of Habitat’s two focus areas for critical home repairs, the other being East Palo Alto where 18% live below the poverty line. In 2019, Habitat will extend the program to Belle Haven.

Revitalizing Parks and Gardens Every weekend of the year, Habitat volunteers and staff are out planting, weeding, and clearing parks and gardens. And, several times each year, we hold our Great Green Weekends where an army of volunteers take part in a three-day blitz and make a transformational impact on a green space. Parks, gardens, and public spaces play a major role in the life of a thriving community. If they are attractive, well-cared for, and safe, the community benefits. We work in partnership with neighbors to support beautification efforts with our volunteers and expertise.

“I was amazed how much work we got through in one day. After we had finished, the garden was transformed from an overgrown mess into something the whole neighborhood could start to enjoy.”

Furnishing Us with Resources Habitat’s “ReStore” sells gently used furniture, cabinetry, lights, and more. It accepts donations from generous owners and sells them to buyers who have an eye for a good deal. The proceeds go directly toward powering our work building, repairing, and revitalizing across our region. Located in San Carlos, in San Mateo County, the ReStore is perfectly placed as a hub for individuals, contractors, and others in the trade to source high-quality pieces.

“The first time I came in to the store I was surprised by just how good the quality of the furniture was—the donations are of a really high standard!” —LINDA, RESTORE CUSTOMER

Planning For the Future Habitat has an impressive pipeline of hundreds of affordable homes that will be built in the coming years. We are poised to break ground imminently on two new sites in Redwood City and in Daly City. We have begun the planning application for eight new homes on land donated to us in the Diamond Heights neighborhood of San Francisco. Beyond this, we are actively exploring more building across our entire three county region. Through your generous support, these homes become a reality.

Habitat marshalls the efforts of thousands of volunteers each year to change people’s lives. Because of this work, new homes are built, old homes are repaired, and neighborhoods are revitalized. This year, 3,203 volunteers worked with us, contributing a total of 29,298 volunteer hours. The value of this work to Habitat was an amazing $849,642!

“I feel good that I live in the house I helped build. I feel a lot of pride, not because it was built by my own hands, but because many others helped me complete it.”

“What’s fulfilling about volunteering? It’s how I feel at the end of the day when I go home: ‘this has been a great day!’”

*Other includes: special events, in-kind donations, faith and other organizations, and bequests.

The financial data reported above is summarized based on the audit performed by Armanino, LLP. Copies of the audit report are available at www.habitatgsf.org/finance.

We are hugely grateful for our donors and are delighted to honor them here. In addition to those listed on these pages, we deeply appreciate the thousands of other donors, at all gift levels, and the many who give anonymously. This list acknowledges gifts given between July 1, 2017 and June 30, 2018. 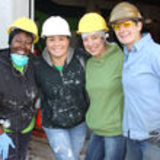 It is our pleasure to present Habitat for Humanity Greater San Francisco’s annual report for financial year 17/18. In it you will find detai...

It is our pleasure to present Habitat for Humanity Greater San Francisco’s annual report for financial year 17/18. In it you will find detai...