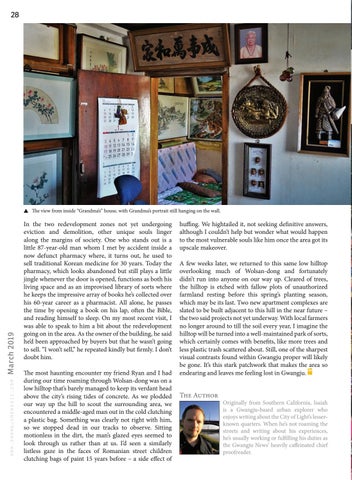 ▲ The view from inside “Grandma’s” house, with Grandma’s portrait still hanging on the wall.

In the two redevelopment zones not yet undergoing eviction and demolition, other unique souls linger along the margins of society. One who stands out is a little 87-year-old man whom I met by accident inside a now defunct pharmacy where, it turns out, he used to sell traditional Korean medicine for 30 years. Today the pharmacy, which looks abandoned but still plays a little jingle whenever the door is opened, functions as both his living space and as an improvised library of sorts where he keeps the impressive array of books he’s collected over his 60-year career as a pharmacist. All alone, he passes the time by opening a book on his lap, often the Bible, and reading himself to sleep. On my most recent visit, I was able to speak to him a bit about the redevelopment going on in the area. As the owner of the building, he said he’d been approached by buyers but that he wasn’t going to sell. “I won’t sell,” he repeated kindly but firmly. I don’t doubt him. The most haunting encounter my friend Ryan and I had during our time roaming through Wolsan-dong was on a low hilltop that’s barely managed to keep its verdant head above the city’s rising tides of concrete. As we plodded our way up the hill to scout the surrounding area, we encountered a middle-aged man out in the cold clutching a plastic bag. Something was clearly not right with him, so we stopped dead in our tracks to observe. Sitting motionless in the dirt, the man’s glazed eyes seemed to look through us rather than at us. I’d seen a similarly listless gaze in the faces of Romanian street children clutching bags of paint 15 years before – a side effect of

huffing. We hightailed it, not seeking definitive answers, although I couldn’t help but wonder what would happen to the most vulnerable souls like him once the area got its upscale makeover. A few weeks later, we returned to this same low hilltop overlooking much of Wolsan-dong and fortunately didn’t run into anyone on our way up. Cleared of trees, the hilltop is etched with fallow plots of unauthorized farmland resting before this spring’s planting season, which may be its last. Two new apartment complexes are slated to be built adjacent to this hill in the near future – the two said projects not yet underway. With local farmers no longer around to till the soil every year, I imagine the hilltop will be turned into a well-maintained park of sorts, which certainly comes with benefits, like more trees and less plastic trash scattered about. Still, one of the sharpest visual contrasts found within Gwangju proper will likely be gone. It’s this stark patchwork that makes the area so endearing and leaves me feeling lost in Gwangju.

Originally from Southern California, Isaiah is a Gwangju-based urban explorer who enjoys writing about the City of Light’s lesserknown quarters. When he’s not roaming the streets and writing about his experiences, he’s usually working or fulfilling his duties as the Gwangju News’ heavily caffeinated chief proofreader. 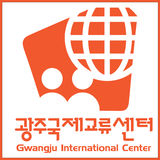