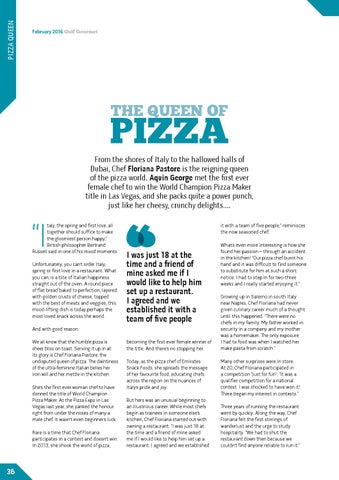 PIZZA From the shores of Italy to the hallowed halls of Dubai, Chef Floriana Pastore is the reigning queen of the pizza world. Aquin George met the first ever female chef to win the World Champion Pizza Maker title in Las Vegas, and she packs quite a power punch, just like her cheesy, crunchy delights....

taly, the spring and first love, all together should suffice to make the gloomiest person happy,” British philosopher Bertrand Russell said in one of his mood moments. Unfortunately, you can’t order Italy, spring or first love in a restaurant. What you can, is a bite of Italian happiness straight out of the oven. A round piece of flat bread baked to perfection, layered with golden crusts of cheese, topped with the best of meats and veggies, this mood-lifting dish is today perhaps the most loved snack across the world.

it with a team of five people,” reminisces the now seasoned chef.

I was just 18 at the time and a friend of mine asked me if I would like to help him set up a restaurant. I agreed and we established it with a team of five people

And with good reason. We all know that the humble pizza is sheer bliss on toast. Serving it up in all its glory is Chef Floriana Pastore, the undisputed queen of pizza. The daintiness of the ultra-feminine Italian belies her iron will and her mettle in the kitchen. She’s the first ever woman chef to have donned the title of World Champion Pizza Maker. At the Pizza Expo in Las Vegas last year, she yanked the honour right from under the noses of many a male chef. It wasn’t even beginner’s luck. Rare is a time that Chef Floriana participates in a contest and doesn’t win. In 2013, she shook the world of pizza,

becoming the first ever female winner of the title. And there’s no stopping her. Today, as the pizza chef of Emirates Snack Foods, she spreads the message of her favourite food, educating chefs across the region on the nuances of Italy’s pride and joy. But hers was an unusual beginning to an illustrious career. While most chefs begin as trainees in someone else’s kitchen, Chef Floriana started out with owning a restaurant. “I was just 18 at the time and a friend of mine asked me if I would like to help him set up a restaurant. I agreed and we established

What’s even more interesting is how she found her passion – through an accident in the kitchen! “Our pizza chef burnt his hand and it was difficult to find someone to substitute for him at such a short notice. I had to step in for two-three weeks and I really started enjoying it.” Growing up in Salerno in south Italy near Naples, Chef Floriana had never given culinary career much of a thought until this happened. “There were no chefs in my family. My father worked in security in a company and my mother was a homemaker. The only exposure I had to food was when I watched her make pasta from scratch.” Many other surprises were in store. At 20, Chef Floriana participated in a competition “just for fun”. “It was a qualifier competition for a national contest. I was shocked to have won it! There began my interest in contests.” Three years of running the restaurant went by quickly. Along the way, Chef Floriana felt the first stirrings of wanderlust and the urge to study hospitality. “We had to shut the restaurant down then because we couldn’t find anyone reliable to run it.” 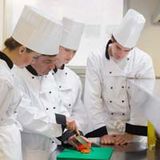