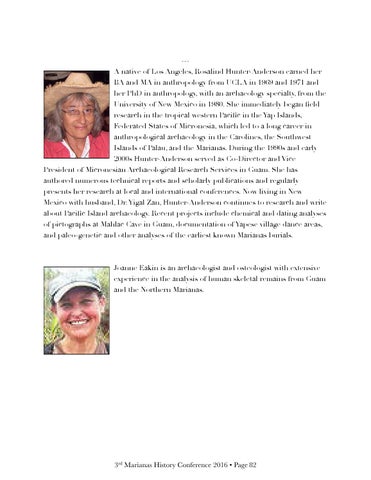 --A native of Los Angeles, Rosalind Hunter-Anderson earned her BA and MA in anthropology from UCLA in 1969 and 1971 and her PhD in anthropology, with an archaeology specialty, from the University of New Mexico in 1980. She immediately began field research in the tropical western Pacific in the Yap Islands, Federated States of Micronesia, which led to a long career in anthropological archaeology in the Carolines, the Southwest Islands of Palau, and the Marianas. During the 1990s and early 2000s Hunter-Anderson served as Co-Director and Vice President of Micronesian Archaeological Research Services in Guam. She has authored numerous technical reports and scholarly publications and regularly presents her research at local and international conferences. Now living in New Mexico with husband, Dr. Yigal Zan, Hunter-Anderson continues to research and write about Pacific Island archaeology. Recent projects include chemical and dating analyses of pictographs at Mahlac Cave in Guam, documentation of Yapese village dance areas, and paleo-genetic and other analyses of the earliest known Marianas burials.

Joanne Eakin is an archaeologist and osteologist with extensive experience in the analysis of human skeletal remains from Guam and the Northern Marianas.â&#x20AC;Š