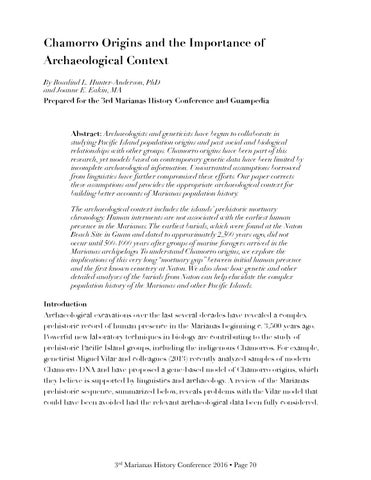 Abstract: Archaeologists and geneticists have begun to collaborate in studying Pacific Island population origins and past social and biological relationships with other groups. Chamorro origins have been part of this research, yet models based on contemporary genetic data have been limited by incomplete archaeological information. Unwarranted assumptions borrowed from linguistics have further compromised these efforts. Our paper corrects these assumptions and provides the appropriate archaeological context for building better accounts of Marianas population history. The archaeological context includes the islands’ prehistoric mortuary chronology. Human interments are not associated with the earliest human presence in the Marianas. The earliest burials, which were found at the Naton Beach Site in Guam and dated to approximately 2,500 years ago, did not occur until 500-1000 years after groups of marine foragers arrived in the Marianas archipelago. To understand Chamorro origins, we explore the implications of this very long “mortuary gap” between initial human presence and the first known cemetery at Naton. We also show how genetic and other detailed analyses of the burials from Naton can help elucidate the complex population history of the Marianas and other Pacific Islands. Introduction Archaeological excavations over the last several decades have revealed a complex prehistoric record of human presence in the Marianas beginning c. 3,500 years ago. Powerful new laboratory techniques in biology are contributing to the study of prehistoric Pacific Island groups, including the indigenous Chamorros. For example, geneticist Miguel Vilar and colleagues (2013) recently analyzed samples of modern Chamorro DNA and have proposed a gene-based model of Chamorro origins, which they believe is supported by linguistics and archaeology. A review of the Marianas prehistoric sequence, summarized below, reveals problems with the Vilar model that could have been avoided had the relevant archaeological data been fully considered.