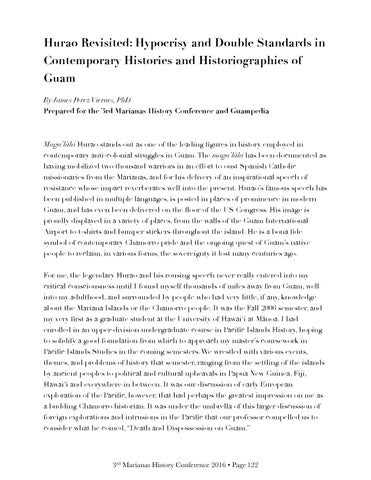 Maga’låhi Hurao stands out as one of the leading figures in history employed in contemporary anti-colonial struggles in Guam. The maga’låhi has been documented as having mobilized two thousand warriors in an effort to oust Spanish Catholic missionaries from the Marianas, and for his delivery of an inspirational speech of resistance whose impact reverberates well into the present. Hurao’s famous speech has been published in multiple languages, is posted in places of prominence in modern Guam, and has even been delivered on the floor of the US Congress. His image is proudly displayed in a variety of places, from the walls of the Guam International Airport to t-shirts and bumper stickers throughout the island. He is a bona fide symbol of contemporary Chamorro pride and the ongoing quest of Guam’s native people to reclaim, in various forms, the sovereignty it lost many centuries ago. For me, the legendary Hurao and his rousing speech never really entered into my critical consciousness until I found myself thousands of miles away from Guam, well into my adulthood, and surrounded by people who had very little, if any, knowledge about the Mariana Islands or the Chamorro people. It was the Fall 2006 semester, and my very first as a graduate student at the University of Hawaiʻi at Mānoa. I had enrolled in an upper-division undergraduate course in Pacific Islands History, hoping to solidify a good foundation from which to approach my master’s coursework in Pacific Islands Studies in the coming semesters. We wrestled with various events, themes, and problems of history that semester, ranging from the settling of the islands by ancient peoples to political and cultural upheavals in Papua New Guinea, Fiji, Hawaiʻi and everywhere in between. It was our discussion of early European exploration of the Pacific, however, that had perhaps the greatest impression on me as a budding Chamorro historian. It was under the umbrella of this larger discussion of foreign explorations and intrusions in the Pacific that our professor compelled us to consider what he coined, “Death and Dispossession on Guam.”