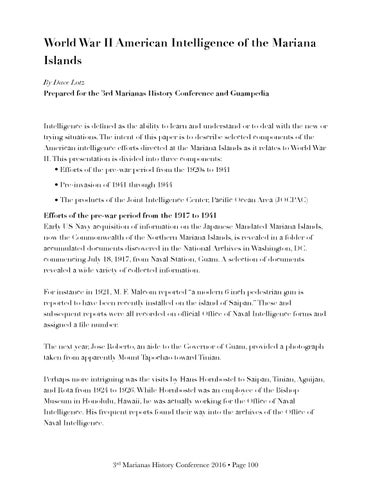 Intelligence is defined as the ability to learn and understand or to deal with the new or trying situations. The intent of this paper is to describe selected components of the American intelligence efforts directed at the Mariana Islands as it relates to World War II. This presentation is divided into three components: • Efforts of the pre-war period from the 1920s to 1941 • Pre-invasion of 1941 through 1944 • The products of the Joint Intelligence Center, Pacific Ocean Area (JOCPAC) Efforts of the pre-war period from the 1917 to 1941 Early US Navy acquisition of information on the Japanese Mandated Mariana Islands, now the Commonwealth of the Northern Mariana Islands, is revealed in a folder of accumulated documents discovered in the National Archives in Washington, DC. commencing July 18, 1917, from Naval Station, Guam. A selection of documents revealed a wide variety of collected information. For instance in 1921, M. F. Malcom reported “a modern 6 inch pedestrian gun is reported to have been recently installed on the island of Saipan.” These and subsequent reports were all recorded on official Office of Naval Intelligence forms and assigned a file number. The next year, Jose Roberto, an aide to the Governor of Guam, provided a photograph taken from apparently Mount Tapochao toward Tinian. Perhaps more intriguing was the visits by Hans Hornbostel to Saipan, Tinian, Aguijan, and Rota from 1924 to 1926. While Hornbostel was an employee of the Bishop Museum in Honolulu, Hawaii, he was actually working for the Office of Naval Intelligence. His frequent reports found their way into the archives of the Office of Naval Intelligence.