The Liberation of Guam Across the Generations 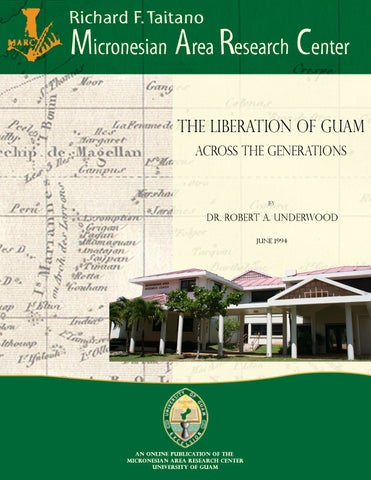 Micronesian Area Research Center The liberation of guam across the generations

todu i sinesedi gi hilo&#39; tano&#39; mana&#39;dana&#39; i nuebu yan i hagas. Todu ikinalamten pasu put pasu, yan ha depependi que&#39; gi manamko&#39; yan gi manhoben. The task assigned to any generation of people is to interpret the meaning of who we are at a given point in time. As we reflect upon the meaning of our commemoration of the 50th anniversary of the Liberation of Guam, we must examine the experience of the war, the exuberance of the Liberation and the meaning for us today. I am a proud member of the generation born after World War II, conscious of the fact that while suffering occurred I was not there. I was raised on the stories of &quot;i tiempon gera.&quot; The stories of the deprivations and sufferings of our families who tried to survive in the most perilous of times; the saga of our people who endured forced marches and forced labor and the tales of those who were tortured and some even executed, some by beheading, are etched into my memory and the memories of those of my generation. We have been inspired as well as saddened by the brutality experienced by the people of Malesso&#39; at Faha&#39; and Tinta where hand grenades killed 46 of our people and where survivors pulled the bodies of the dead over them to hide from the Japanese soldiers. Playing dead to remain alive became the method for survival, remaining outwardly calm while inwardly outraged became a necessity to avoid brutality. Living through this nightmare demonstrated not only our resourcefulness as a people, but our strength fueled by our belief in God, the return of the Americans, and ourselves. As a member of the postwar generation, I have an obligation to not only tell the story of liberation to the next, but I have a solemn obligation to build on the freedom and liberation which I enjoy as a result of the efforts of those that went before me. As we memorialize, as we commemorate and as we honor - we should remember that the greatest tribute we can pay is to use the freedom which liberation represents wisely. Like all things we inherit from our parents, from the previous generation, it is up to us to use wisely, to extend, to profit from and to pass on the treasures which we receive from our elders. The inheritance of freedom is the greatest treasure that we have received, and we have used it to build the modern Guam that we now have. We have much to be proud of in our homeland. We have a multibillion-dollar economy, a high standard of living and a vibrant democracy. Yet, we know that we do not have a full democracy and we know that Guam&#39;s political development is far from complete. We recognize that we don&#39;t have full representation in the national government and that our local government does not proceed from our own action. True democracy exists when a government proceeds from the consent of the governed. Our government is a creation of Congressional action, a Congress in which we have no voting participation. So it falls to our generation to build on the freedom we have inherited so that future generations will be free-er. It falls to our generation to take freedom to its next logical step and it falls to our generation to develop a new vision of freedom. I am happy to

note that the fruit of this generational obligation is our desire to build a Commonwealth of Guam, a commonwealth built on our vision of democracy, a commonwealth built upon a strong and balanced partnership with the federal government and a commonwealth which recognizes the right of the Chamorro people to self-determination. This vision of freedom presents challenges of its own and while not as dangerous as the challenges the previous generation faced during the Occupation, the meaning and importance of our quest for Commonwealth is no less significant than our earlier hopes for deliverance from the hands of the Japanese. The Commonwealth Act, which I have introduced in the House of Representatives as H.R. 1521, is a detailed proposal which has sparked discussion and at times dissent. But its fundamental premise, that the people of Guam have a right to govern themselves, remains unchallenged. Extending the meaning of freedom in the ‘1940s’, which meant freedom from the hands of the enemy, to the meaning of freedom in the ‘1990s’, which means the freedom to govern oneself, is the best tribute this generation can pay to the previous one. It is the best way we can say si Yu&#39;os ma&#39;ase&#39; to our elders and to our liberators in uniform. It represents a perfection of the freedom we enjoy, and it makes liberation vibrant and alive in our day-to-day existence as a people and as an island. And our generation has been using the freedom handed to us by the sacrifices of others to express our concerns regarding the many grievances we have we the federal government. We demonstrate, we argue, we confront and we decry the vestiges of colonialism, which continue to survive to the present. Some argue that these expressions run counter to our commemoration of the liberation of Guam. It does not. Quite to the contrary, the desire to be free and to confront injustice whatever its origins exemplifies the very spirit of liberation and freedom which was planted on our shores by the blood of so many in the years 1941-44. In this generational sense, we can agree that those who demonstrate to have their lands returned by the US government are not being disrespectful to a previous generation that welcomed the Marines and soldiers with tears - they are being mindful of the sacred legacy of our manamko&#39; that fought from within to preserve our people. Those who fight for political status change are not insulting the flag of our country - they have learned from their elders that the flag is a promise of democracy and freedom for our own people as well. And those who criticize a mindless federal bureaucracy, yes even those who criticize the military on Guam, are not oblivious to the immense human sacrifice of the military on our beaches; instead, they have learned that unlike other previous colonial rulers of Guam, the US military is an arm of a democratic form of government that must respond and conform to our people&#39;s claims to self determination and that they must live up to their own democratic ideals. President Clinton told veterans at Normandy that we are the children of their sacrifice. For the generation to which so much was given, and for which so much was sacrificed,

especially on Guam, the duty to safeguard our legacy of freedom and the duty to build on that legacy is more compelling and urgent. We may never be called upon to defend freedom in the ways our elders were. Some of you have served in the military, but your families will never be subjected to hostile occupation as our elders were. But we are now called to summon the same inner strength, and inner sense of justice in making the freedom we were given a living legacy for our children. The challenge to create a new Guam, a new partnership with the federal government is our generation&#39;s call to arms. The challenge to secure the blessings of liberty is our generation&#39;s peacetime mobilization. And it is every bit as worthy of our people&#39;s legacy as the perseverance of our parents&#39; generation in wartime occupation. It remains to the next generation to determine how they wish to build on this vision of freedom. It remains for those who will grow to adulthood in the next century to interpret the meaning of liberation and freedom in their lives. If they draw on our current experiences and, more importantly, if they understand the heroism and the magnitude of the sufferings of the previous generation, then they will add their own imprint to the story of freedom on Guam. This may be the last celebration of the Liberation of Guam, which will take on the complexion of a commemoration of the battle. While we must never lose sight of the heroics of the battle, we must be inspired to move forward. While we must never forget the trials and tribulations of those who stormed the shores and hid in the caves, we must strive to move freedom forward into the next generation, into the next century. All of us, those in HagĂĽtĂąa and those in San Diego, those in Humatak and those in Washington D.C., must remain mindful of our obligations and our role in the life and development of Guam, our homeland. We all play a role in this and we must challenge ourselves not to be as heroic as our elders fifty years ago, for this can never be, but to have the same spirit and commitment to the land which made us all possible.

The Liberation of Guam Across the Generations

Guam Congressional Delegate, Dr. Robert Underwood, elivered this speech on June 18, 1994 to the US House of Representatives.