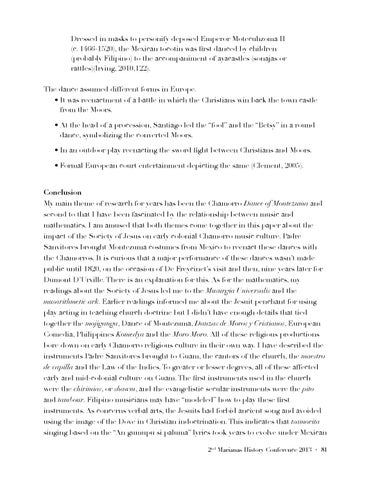 Dressed in masks to personify deposed Emperor Motecuhzoma II (c. 1466-1520), the Mexican tocotin was first danced by children (probably Filipino) to the accompaniment of ayacastles (sonajas or rattles)(Irving, 2010,122).

The dance assumed different forms in Europe. • It was reenactment of a battle in which the Christians win back the town castle from the Moors. • At the head of a procession, Santiago led the “fool” and the “Betsy” in a round dance, symbolizing the converted Moors. • In an outdoor play reenacting the sword fight between Christians and Moors. • Formal European court entertainment depicting the same (Clement, 2005).

! Conclusion My main theme of research for years has been the Chamorro Dance of Montezuma and second to that I have been fascinated by the relationship between music and mathematics. I am amused that both themes come together in this paper about the impact of the Society of Jesus on early colonial Chamorro music culture. Padre Sanvitores brought Montezuma costumes from Mexico to reenact these dances with the Chamorros. It is curious that a major performance of these dances wasn’t made public until 1820, on the occasion of De Freycinet’s visit and then, nine years later for Dumont D’Urville. There is an explanation for this. As for the mathematics, my readings about the Society of Jesus led me to the Musurgia Universalis and the musarithmetic ark. Earlier readings informed me about the Jesuit penchant for using play acting in teaching church doctrine but I didn’t have enough details that tied together the mojiganga, Dance of Montezuma, Danzas de Moros y Cristianos, European Comedia, Philippines Komedya and the Moro Moro. All of these religious productions bore down on early Chamorro religious culture in their own way. I have described the instruments Padre Sanvitores brought to Guam, the cantors of the church, the maestro de capilla and the Law of the Indies. To greater or lesser degrees, all of these affected early and mid-colonial culture on Guam. The first instruments used in the church were the chirimias, or shawm, and the evangelistic secular instruments were the pito and tambour. Filipino musicians may have “modeled” how to play these first instruments. As concerns verbal arts, the Jesuits had forbid ancient song and avoided using the image of the Dove in Christian indoctrination. This indicates that tsamorita singing based on the “An gumupu si paluma” lyrics took years to evolve under Mexican 2nd Marianas History Conference 2013 ・ !81