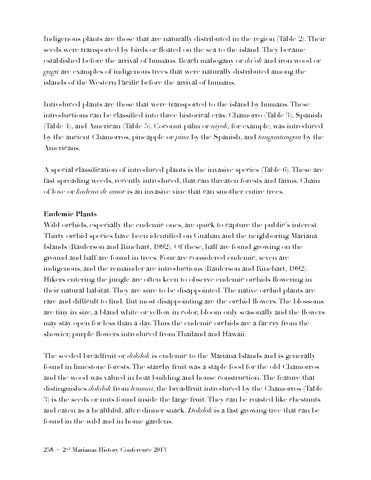 Indigenous plants are those that are naturally distributed in the region (Table 2). Their seeds were transported by birds or floated on the sea to the island. They became established before the arrival of humans. Beach mahogany or daâ&#x20AC;&#x2122;ok and iron wood or gagu are examples of indigenous trees that were naturally distributed among the islands of the Western Pacific before the arrival of humans.

Introduced plants are those that were transported to the island by humans. These introductions can be classified into three historical eras: Chamorro (Table 3), Spanish (Table 4), and American (Table 5). Coconut palm or niyok, for example, was introduced by the ancient Chamorros, pineapple or pina by the Spanish, and tangantangan by the Americans.

A special classification of introduced plants is the invasive species (Table 6). These are fast spreading weeds, recently introduced, that can threaten forests and farms. Chain of love or kadena de amor is an invasive vine that can smother entire trees.

Endemic Plants Wild orchids, especially the endemic ones, are quick to capture the publicâ&#x20AC;&#x2122;s interest. Thirty orchid species have been identified on Guahan and the neighboring Mariana Islands (Raulerson and Rinehart, 1992). Of these, half are found growing on the ground and half are found in trees. Four are considered endemic, seven are indigenous, and the remainder are introductions (Raulerson and Rinehart, 1992). Hikers entering the jungle are often keen to observe endemic orchids flowering in their natural habitat. They are sure to be disappointed. The native orchid plants are rare and difficult to find. But most disappointing are the orchid flowers. The blossoms are tiny in size, a bland white or yellow in color, bloom only seasonally and the flowers may stay open for less than a day. Thus the endemic orchids are a far cry from the showier, purple flowers introduced from Thailand and Hawaii.

The seeded breadfruit or dokdok is endemic to the Mariana Islands and is generally found in limestone forests. The starchy fruit was a staple food for the old Chamorros and the wood was valued in boat building and house construction. The feature that distinguishes dokdok from lemmai, the breadfruit introduced by the Chamorros (Table 3) is the seeds or nuts found inside the large fruit. They can be roasted like chestnuts and eaten as a healthful, after-dinner snack. Dokdok is a fast growing tree that can be found in the wild and in home gardens.