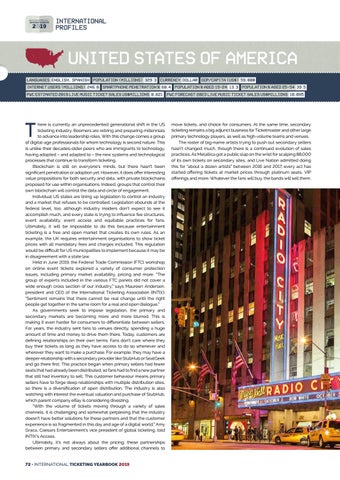 here is currently an unprecedented generational shift in the US ticketing industry. Boomers are retiring and preparing millennials to advance into leadership roles. With this change comes a group of digital-age professionals for whom technology is second nature. This is unlike their decades-older peers who are immigrants to technology, having adopted – and adapted to – the new systems and technological processes that continue to transform ticketing. Blockchain is still on everyone’s minds, but there hasn’t been signiﬁcant penetration or adoption yet. However, it does oﬀer interesting value propositions for both security and data, with private blockchains proposed for use within organisations. Indeed, groups that control their own blockchain will control the data and circle of engagement. Individual US states are lining up legislation to control an industry and a market that refuses to be controlled. Legislation abounds at the federal level, too, although industry insiders don’t expect to see it accomplish much, and every state is trying to inﬂuence fee structures, event availability, event access and equitable practices for fans. Ultimately, it will be impossible to do this because entertainment ticketing is a free and open market that creates its own rules. As an example, the UK requires entertainment organisations to show ticket prices with all mandatory fees and charges included. This regulation would be diﬃcult for US municipalities to implement because it may be in disagreement with a state law. Held in June 2019, the Federal Trade Commission (FTC) workshop on online event tickets explored a variety of consumer protection issues, including primary market availability, pricing and more. “The group of experts included in the various FTC panels did not cover a wide enough cross section of our industry,” says Maureen Andersen, president and CEO of the International Ticketing Association (INTIX). “Sentiment remains that there cannot be real change until the right people get together in the same room for a real and open dialogue.” As governments seek to impose legislation, the primary and secondary markets are becoming more and more blurred. This is making it even harder for consumers to diﬀerentiate between sellers. For years, the industry sent fans to venues directly, spending a huge amount of time and money to drive them there. Today, customers are deﬁning relationships on their own terms. Fans don’t care where they buy their tickets as long as they have access to do so whenever and wherever they want to make a purchase. For example, they may have a deeper relationship with a secondary provider like StubHub or SeatGeek and go there ﬁrst. This practice began when primary sellers had fewer seats that had already been distributed, so fans had to ﬁnd a new partner that still had inventory to sell. This customer behaviour means primary sellers have to forge deep relationships with multiple distribution sites, so there is a diversiﬁcation of open distribution. The industry is also watching with interest the eventual valuation and purchase of StubHub, which parent company eBay is considering divesting. “With the volume of tickets moving through a variety of sales channels, it is challenging and somewhat perplexing that the industry doesn’t have better solutions for these partners and that the customer experience is so fragmented in this day and age of a digital world,” Amy Graca, Caesars Entertainment’s vice president of global ticketing, told INTIX’s Access. Ultimately, it’s not always about the pricing; these partnerships between primary and secondary sellers oﬀer additional channels to

move tickets, and choice for consumers. At the same time, secondary ticketing remains a big adjunct business for Ticketmaster and other large primary technology players, as well as high-volume teams and venues. The roster of big-name artists trying to push out secondary sellers hasn’t changed much, though there is a continued evolution of sales practices. As Metallica got a public slap on the wrist for scalping 88,000 of its own tickets on secondary sites, and Live Nation admitted doing this for “about a dozen artists” between 2016 and 2017, every act has started oﬀering tickets at market prices through platinum seats, VIP oﬀerings and more. Whatever the fans will buy, the bands will sell them.