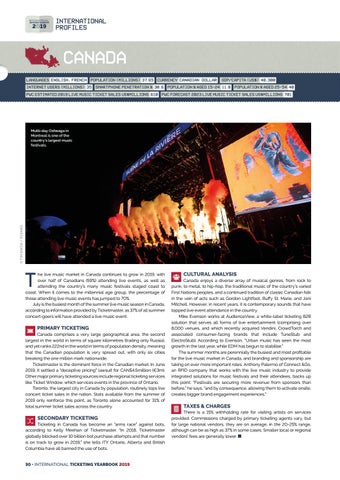 Multi-day Osheaga in Montreal is one of the country’s largest music festivals.

he live music market in Canada continues to grow in 2019, with over half of Canadians (59%) attending live events, as well as attending the country’s many music festivals staged coast to coast. When it comes to the millennial age group, the percentage of those attending live music events has jumped to 70%. July is the busiest month of the summer live music season in Canada, according to information provided by Ticketmaster, as 37% of all summer concert-goers will have attended a live music event.

PRIMARY TICKETING Canada comprises a very large geographical area, the second largest in the world in terms of square kilometres (trailing only Russia), and yet ranks 222nd in the world in terms of population density, meaning that the Canadian population is very spread out, with only six cities breaking the one million mark nationwide. Ticketmaster is the dominant force in the Canadian market. In June 2019, it settled a “deceptive pricing” lawsuit for CAN$4.5million (€3m). Other major primary ticketing sources include regional ticketing services like Ticket Window, which services events in the province of Ontario. Toronto, the largest city in Canada by population, routinely tops live concert ticket sales in the nation. Stats available from the summer of 2019 only reinforce this point, as Toronto alone accounted for 31% of total summer ticket sales across the country.

SECONDARY TICKETING Ticketing in Canada has become an “arms race” against bots, according to Kelly Meehan of Ticketmaster. “In 2018, Ticketmaster globally blocked over 10 billion bot purchase attempts and that number is on track to grow in 2019,” she tells ITY. Ontario, Alberta and British Columbia have all banned the use of bots.

CULTURAL ANALYSIS Canada enjoys a diverse array of musical genres, from rock to punk, to metal, to hip-hop, the traditional music of the country’s varied First Nations peoples, and a continued tradition of classic Canadian folk in the vein of acts such as Gordon Lightfoot, Buﬀy St. Marie, and Joni Mitchell. However, in recent years, it is contemporary sounds that have topped live event attendance in the country. Mike Evenson works at AudienceView, a white-label ticketing B2B solution that serves all forms of live entertainment (comprising over 8,000 venues, and which recently acquired Vendini, CrowdTorch and associated consumer-facing brands that include TuneStub and ElectroStub). According to Evenson, “Urban music has seen the most growth in the last year, while EDM has begun to stabilise.” The summer months are perennially the busiest and most proﬁtable for the live music market in Canada, and branding and sponsorship are taking on ever more important roles. Anthony Palermo of Connect &Go, an RFID company that works with the live music industry to provide integrated solutions for music festivals and their attendees, backs up this point: “Festivals are securing more revenue from sponsors than before,” he says, “and by consequence, allowing them to activate onsite, creates bigger brand engagement experiences.”

TAXES & CHARGES There is a 15% withholding rate for visiting artists on services provided. Commissions charged by primary ticketing agents vary, but for large national vendors, they are on average, in the 20-25% range, although can be as high as 37% in some cases. Smaller local or regional vendors’ fees are generally lower.