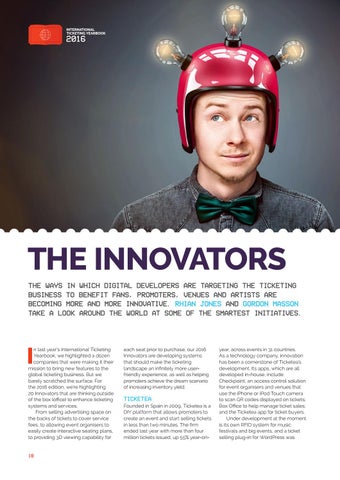 THE INNOVATORS THE WAYS IN WHICH DIGITAL DEVELOPERS ARE TARGETING THE TICKETING BUSINESS TO BENEFIT FANS, PROMOTERS, VENUES AND ARTISTS ARE BECOMING MORE AND MORE INNOVATIVE. RHIAN JONES AND GORDON MASSON TAKE A LOOK AROUND THE WORLD AT SOME OF THE SMARTEST INITIATIVES.

n last year’s International Ticketing Yearbook, we highlighted a dozen companies that were making it their mission to bring new features to the global ticketing business. But we barely scratched the surface. For the 2016 edition, we’re highlighting 20 Innovators that are thinking outside of the box (office) to enhance ticketing systems and services. From selling advertising space on the backs of tickets to cover service fees, to allowing event organisers to easily create interactive seating plans, to providing 3D viewing capability for

each seat prior to purchase, our 2016 Innovators are developing systems that should make the ticketing landscape an infinitely more userfriendly experience, as well as helping promoters achieve the dream scenario of increasing inventory yield.

TICKETEA Founded in Spain in 2009, Ticketea is a DIY platform that allows promoters to create an event and start selling tickets in less than two minutes. The firm ended last year with more than four million tickets issued, up 55% year-on-

year, across events in 31 countries. As a technology company, innovation has been a cornerstone of Ticketea’s development. Its apps, which are all developed in-house, include Checkpoint, an access control solution for event organisers and venues that use the iPhone or iPod Touch camera to scan QR codes displayed on tickets; Box Office to help manage ticket sales; and the Ticketea app for ticket buyers. Under development at the moment is its own RFID system for music festivals and big events, and a ticket selling plug-in for WordPress was