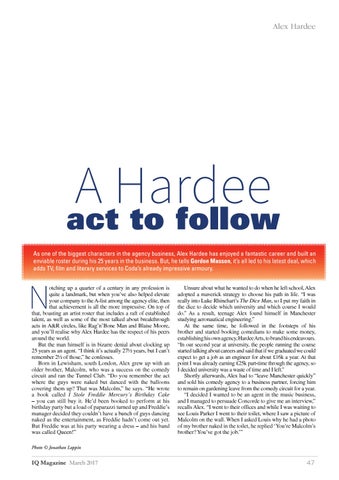 A Hardee act to follow As one of the biggest characters in the agency business, Alex Hardee has enjoyed a fantastic career and built an enviable roster during his 25 years in the business. But, he tells Gordon Masson, it’s all led to his latest deal, which adds TV, film and literary services to Coda’s already impressive armoury.

otching up a quarter of a century in any profession is quite a landmark, but when you’ve also helped elevate your company to the A-list among the agency elite, then that achievement is all the more impressive. On top of that, boasting an artist roster that includes a raft of established talent, as well as some of the most talked about breakthrough acts in A&R circles, like Rag’n’Bone Man and Blaise Moore, and you’ll realise why Alex Hardee has the respect of his peers around the world. But the man himself is in bizarre denial about clocking up 25 years as an agent. “I think it’s actually 27½ years, but I can’t remember 2½ of those,” he confesses. Born in Lewisham, south London, Alex grew up with an older brother, Malcolm, who was a success on the comedy circuit and ran the Tunnel Club. “Do you remember the act where the guys were naked but danced with the balloons covering them up? That was Malcolm,” he says. “He wrote a book called I Stole Freddie Mercury’s Birthday Cake – you can still buy it. He’d been booked to perform at his birthday party but a load of paparazzi turned up and Freddie’s manager decided they couldn’t have a bunch of guys dancing naked as the entertainment, as Freddie hadn’t come out yet. But Freddie was at his party wearing a dress – and his band was called Queen!”

Unsure about what he wanted to do when he left school, Alex adopted a maverick strategy to choose his path in life. “I was really into Luke Rhinehart’s The Dice Man, so I put my faith in the dice to decide which university and which course I would do.” As a result, teenage Alex found himself in Manchester studying aeronautical engineering.” At the same time, he followed in the footsteps of his brother and started booking comedians to make some money, establishing his own agency, Hardee Arts, to brand his endeavours. “In our second year at university, the people running the course started talking about careers and said that if we graduated we could expect to get a job as an engineer for about £16k a year. At that point I was already earning £25k part-time through the agency, so I decided university was a waste of time and I left.” Shortly afterwards, Alex had to “leave Manchester quickly” and sold his comedy agency to a business partner, forcing him to remain on gardening leave from the comedy circuit for a year. “I decided I wanted to be an agent in the music business, and I managed to persuade Concorde to give me an interview,” recalls Alex. “I went to their offices and while I was waiting to see Louis Parker I went to their toilet, where I saw a picture of Malcolm on the wall. When I asked Louis why he had a photo of my brother naked in the toilet, he replied ‘You’re Malcolm’s brother? You’ve got the job.’”