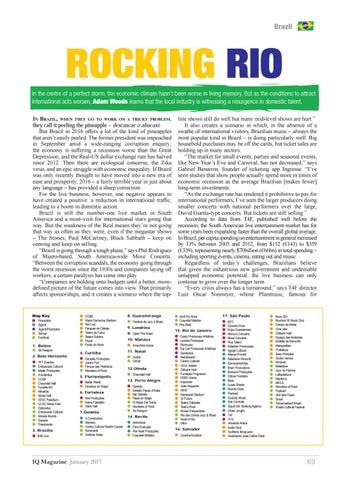 ROCKING RIO In the centre of a perfect storm, the economic climate hasn’t been worse in living memory. But as the conditions to attract international acts worsen, Adam Woods learns that the local industry is witnessing a resurgence in domestic talent. In Brazil, when they go to work on a tricky problem, they call it peeling the pineapple – descascar o abacaxi. But Brazil in 2016 offers a lot of the kind of pineapples that aren’t easily peeled. The former president was impeached in September amid a wide-ranging corruption enquiry; the economy is suffering a recession worse than the Great Depression; and the Real-US dollar exchange rate has halved since 2012. Then there are ecological concerns, the Zika virus, and an epic struggle with economic inequality. If Brazil was only recently thought to have moved into a new era of ease and prosperity, 2016 – a fairly terrible year in just about any language – has provided a sharp correction. For the live business, however, one negative appears to have created a positive: a reduction in international traffic, leading to a boom in domestic action. Brazil is still the number-one live market in South America and a must-visit for international stars going that way. But the weakness of the Real means they’re not going that way as often as they were, even if the megastar shows – The Stones, Paul McCartney, Black Sabbath – keep on coming and keep on selling. “Brazil is going through a tough phase,” says Phil Rodriguez of Miami-based, South America-wide Move Concerts. “Between the corruption scandals, the economy going through the worst recession since the 1930s and companies laying off workers, a certain paralysis has come into play. “Companies are holding onto budgets until a better, moredefined picture of the future comes into view. That primarily affects sponsorships, and it creates a scenario where the top-

line shows still do well but many mid-level shows are hurt.” It also creates a scenario in which, in the absence of a swathe of international visitors, Brazilian music – always the most popular kind in Brazil – is doing particularly well. Big household purchases may be off the cards, but ticket sales are holding up in many sectors. “The market for small events, parties and seasonal events, like New Year’s Eve and Carnival, has not decreased,” says Gabriel Benarros, founder of ticketing app Ingresse. “I’ve seen studies that show people actually spend more in times of economic recession as the average Brazilian [makes fewer] long-term investments. “As the exchange rate has rendered it prohibitive to pay for international performers, I’ve seen the larger producers doing smaller concerts with national performers over the large, David Guetta-type concerts. But tickets are still selling.” According to data from T4F, published well before the recession, the South American live entertainment market has for some years been expanding faster than the overall global average. In Brazil, per capita spending on entertainment in general increased by 13% between 2005 and 2012, from $152 (€143) to $359 (€339), representing nearly $70billion (€66bn) in total spending – including sporting events, cinema, eating out and music. Regardless of today’s challenges, Brazilians believe that given the industrious new government and undeniable untapped economic potential, the live business can only continue to grow over the longer term. “Every crisis always has a turnaround,” says T4F director Luiz Oscar Niemeyer, whose Planmusic, famous for