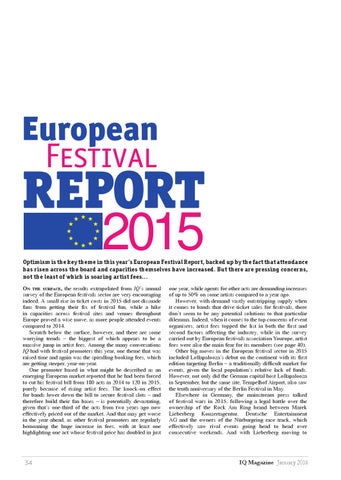 Optimism is the key theme in this year’s European Festival Report, backed up by the fact that attendance has risen across the board and capacities themselves have increased. But there are pressing concerns, not the least of which is soaring artist fees…

On the surface, the results extrapolated from IQ’s annual survey of the European festivals sector are very encouraging indeed. A small rise in ticket costs in 2015 did not dissuade fans from getting their fix of festival fun, while a hike in capacities across festival sites and venues throughout Europe proved a wise move, as more people attended events compared to 2014. Scratch below the surface, however, and there are some worrying trends – the biggest of which appears to be a massive jump in artist fees. Among the many conversations IQ had with festival promoters this year, one theme that was raised time and again was the spiralling booking fees, which are getting steeper, year-on-year. One promoter based in what might be described as an emerging European market reported that he had been forced to cut his festival bill from 180 acts in 2014 to 120 in 2015, purely because of rising artist fees. The knock-on effect for bands lower down the bill to secure festival slots – and therefore build their fan bases – is potentially devastating, given that’s one-third of the acts from two years ago now effectively priced out of the market. And that may get worse in the year ahead, as other festival promoters are regularly bemoaning the huge increase in fees, with at least one highlighting one act whose festival price has doubled in just

one year, while agents for other acts are demanding increases of up to 50% on some artists compared to a year ago. However, with demand vastly outstripping supply when it comes to bands that drive ticket sales for festivals, there don’t seem to be any potential solutions to that particular dilemma. Indeed, when it comes to the top concerns of event organisers, artist fees topped the list in both the first and second factors affecting the industry, while in the survey carried out by European festivals association Yourope, artist fees were also the main fear for its members (see page 40). Other big moves in the European festival sector in 2015 included Lollapalooza’s debut on the continent with its first edition targeting Berlin – a traditionally difficult market for events, given the local population’s relative lack of funds. However, not only did the German capital host Lollapalooza in September, but the same site, Tempelhof Airport, also saw the tenth anniversary of the Berlin Festival in May. Elsewhere in Germany, the mainstream press talked of festival wars in 2015, following a legal battle over the ownership of the Rock Am Ring brand between Marek Lieberberg Konzertagentur, Deutsche Entertainment AG and the owners of the Nürburgring race track, which effectively saw rival events going head to head over consecutive weekends. And with Lieberberg moving to 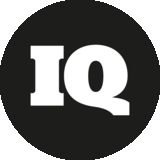