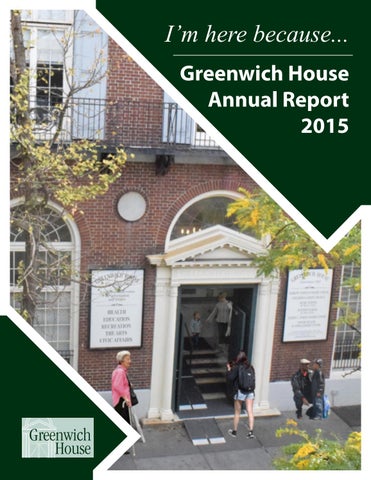 Greenwich House helps individuals and families lead more fulfilling lives by offering social and health services, cultural and educational programs and opportunities for civic involvement to New Yorkers of all ages and backgrounds.

LETTER FROM THE BOARD CHAIR AND EXECUTIVE DIRECTOR

What brought you here? When we ask this question to those who walk through Greenwich House’s doors, we typically find that no two answers are the same. Some say they have come to learn a new skill in a welcoming, non-judgmental environment. Others say they want to receive counseling for a past trauma or to have their only hot meal of the day. Still others say they just want to be a good neighbor and volunteer to help serve those meals. Greenwich House was founded in 1902 to meet the needs of the surrounding community. At that time, the Village was a crowded, largely immigrant and poor neighborhood and our programs were a response to the challenges faced by those immigrants: the first ever Tenants Rights Manual helped improve living conditions in the area; the Handicraft School taught marketable skills to those struggling to provide for their families; and the children’s theater provided child care for working parents and a creative and safe outlet for their restless kids. As the Village has changed, so has Greenwich House. Today, we offer a wide selection of programs—arts education, senior services and behavioral health—that continue to serve our neighbors and those who visit, or work and get care in Greenwich Village. The one constant, regardless of the reason you walk through Greenwich House’s doors, is that all of us who make up Greenwich Village’s extraordinary community continue to come together to help each other lead more fulfilling lives. Thank you for being a part of our community.

FEATURED ACCOMPLISHMENTS Global Groove Youth Orchestra Fills a Gap in Music Education Greenwich House Music School invited former public school music instructor Eve Zanni to join its faculty and lead a youth ensemble following the loss of the music program at PS 41 in Greenwich Village. The Global Groove Youth Orchestra combines the innovation of Rhythm First Jazz with World Music whole-body learning to inspire children. The orchestraâ&amp;#x20AC;&amp;#x2122;s middle and high school aged members learn rhythm techniques, how to read music and, most importantly, how to collaborate in a creative environment. Drawing from traditional string instruments, pianos and drums as well as marimbas, vibraphones, congas and djembes, the Global Groove Youth Orchestra makes learning about music and performing it more fun than ever before. At the same time it encourages collaboration and respect for alternative viewpoints. With private funding, this program remains free for all who participate.

Chemical Dependency Program and NYU Launch Smoking Cessation Program The College of Nursing at New York University lent their knowledge in support of improving services at the Chemical Dependency Program. Honors Capstone students and Greenwich House staff developed and implemented a long-term smoking cessation program for Chemical Dependency clients. The program, Better Breathing, Better You, provides assessment, advice and coaching for individuals interested in stopping smoking. Better Breather, Better You is based on recent CDC evidence that quitting all addictive substances at the same time is the most beneficial route to take. During each eight-week cycle, nursing students lead weekly smoking cessation groups, ranging in size from two to ten people, that set self-management techniques and set and track personal goals. At the end of the eight weeks, a graduation ceremony is held for all successful clients. 4 | Greenwich House Annual Report 2015

Neighborhood Leaders Save Our Lady of Pompeii Senior Center When Greenwich House was advised by Our Lady of Pompeii Church that is was considering not renewing the lease for its senior center in the Churchâ&amp;#x20AC;&amp;#x2122;s lower level, seniors, community leaders and elected officials including Manhattan Borough President Gale Brewer, New York City Council Members Margaret Chin and Corey Johnson, New York State Senator Brad Hoylman and New York State Assembly Member Debra Glick came together to demand that the 45 year old senior center be allowed to stay. The church reportedly hoped to increase its income by renting the space to outside groups such as film production crews. Thanks to community support and after months of negotiations under the oversight of Timothy Cardinal Dolan, a new three-year lease was signed in August, 2015 allowing the senior center to remain at the Church. Our Lady of Pompeii Senior Center provides hot meals and hosts health, cultural and recreational programs for more than 100 seniors each weekday.

PROGRAM HIGHLIGHTS After-School Starts Having Fun on Friday Nights A new program at Greenwich House After-School, Friday Night Fun, provides kids from kindergarten through fifth grade with an evening of crafts and games with their friend, and parents with free time for their own adult activities. Based on parentsâ&amp;#x20AC;&amp;#x2122; suggestions, Friday Night Fun runs on select Fridays, and is open to all families whether or not enrolled in the after-school program.

Left: Structured games and crafts are a part of Friday Night Fun at After-School. Below: Greenwich House Pottery Resident Artist and noted painter Ghada Amer prepares a clay canvas during her residency.

To encourage interdisciplinary exploration, Greenwich House Pottery expanded its Residency Program by inviting established New York-based artists accomplished in other mediums to explore ceramics. World-renowned Egyptian painter Ghada Amer was the inaugural resident. Amer brought an exciting and diverse approach to ceramics by creating large scale relief portraits in clay. Her presence was a learning experience for all, seeing how the lack of material understanding can open creative capacity beyond the expected.

Senior Health and Consultation Center Helps a Client Turn 100 The Senior Health and Consultation Center wished Ms. R. a happy 100th birthday in June, 2015. Ms. R, who has been receiving services from SHCC for more than 22 years, thanked Greenwich House for helping her reach this milestone. Coming to Greenwich House for psychotherapy in the 1990s, she also became a fixture during lunch at Greenwich House Senior Centers too. Ms. R. has since become homebound but SHCC remains a constant for her by providing home visits from a Greenwich House social worker, home health aid, psychiatrist and internist. With SHCC, at 100 Ms. R. remains independent, living her life on her own terms.

PROGRAM HIGHLIGHTS CONT’D Partnership Expands the Arts at Greenwich House Senior Centers Greenwich House’s Center on the Square joined with MoreArt to bring the Disappearing City quilting project to Greenwich Village. MoreArt is a non-profit organization that fosters collaboration between artists and communities to create thought-provoking art and educational programs that inspire broad discourse on social and cultural issues. Led by artist Amy Wilson, Disappearing City taught quilt-making to seniors and used it to engage Center members in the ongoing conversation about gentrification. The six week project used quilts to document the social, cultural and physical changes that have affected the Lower West Side. It culminated with a community exhibition of the quilts.

Barrow Street Nursery School Brings Parents Closer to the Classroom Barrow Street Nursery School believes that ongoing communication, community events and parent participation cultivate strong relationships among families and the School’s staff that help students develop and grow to their full potential. To further help parents stay connected to what goes on in the classroom, BSNS instituted daily Weebly Blogs for each class. On the blogs, teachers post photos and updates on class projects as well as share the goals and methodology behind each lesson.

Children’s Safety Project Gets a New Tool to Treat Youth and Their Caregivers The Children’s Safety Project staff has begun training in a new therapeutic program, Attachment, Self-Regulation and Competency (ARC) Therapy. ARC provides a flexible framework designed to treat trauma that is related to a specific incident and to treat developmental trauma for both youth and caregivers. Studies indicate that ARC leads to a reduction in post-traumatic stress symptoms, anxiety and depression and it helps to increase adaptive and social skills. ARC has already proven valuable with clients like Julia, a15 year old girl who suffered from developmental trauma, growing up with an erratic mother who suffered from a severe drug addiction as well as specific incidents of trauma, that were the result of her stepfather’s PTSD from his military service. At the Children’s Safety Project, ARC training is enabling therapists to address the compounded causes of Julia’s depression, suicidal feelings, and self-harming activities and simultaneously helping her mother become a safe, loving and dependable figure in her life. 8 | Greenwich House Annual Report 2015

Right: Seniors discuss quilts made as part of the Disappearing City project at Center on the Square. Below: ARC Therapy joins other Children’s Safety Project methodologies, like art therapy, that allows children to express feelings they are not yet able to verbalize.

There’s an enthusiasm here. It gives me the opportunity to grow which can be difficult in your 80’s.

Iâ&amp;#x20AC;&amp;#x2122;m here because... You learn as much from other artists working in the studio as you do in your class.

Medicaid and other insurance

Total operating revenues and other support

Medicaid and Other Insurance 26%

Medicaid and Other Insurance 27%

Iâ&amp;#x20AC;&amp;#x2122;m here because... Greenwich House helps me stay sober, builds my self-esteem and makes me want to stay alive!

DONORS Greenwich House gratefully acknowledges the many individuals, companies and foundations for their generosity during the 2015 fiscal year: July 1, 2014 - June 30, 2015.

Iâ&amp;#x20AC;&amp;#x2122;m here because... No where else could I find a better mentor to help me develop my skills and inspire me to keep playing.

Arts programs providing children ages 5-17 the opportunity to learn and have fun outside of school by tapping into their interests in the arts through specialized curricula. 27 Barrow Street, 212-242-4140, ext. 263

A school with studio and exhibition space for ceramics, offering classes for all ages, workshops, fabrications, residencies, intern programs and solo and group shows. 16 Jones Street, 212-242-4106

A health center providing mental health care for seniors, including the homebound, who are coping with the challenges brought on by aging. 27 Barrow Street, 212-242-4140, ext. 251

One aspect of the Smoking Cessation Program at the Chemical Dependency Program uses art to help clients express their struggles to become substance free.

A private education and childcare program with half and full-day sessions featuring a serviceoriented curriculum. 27 Barrow Street, 212-633-1203 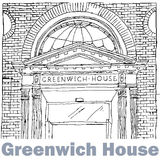