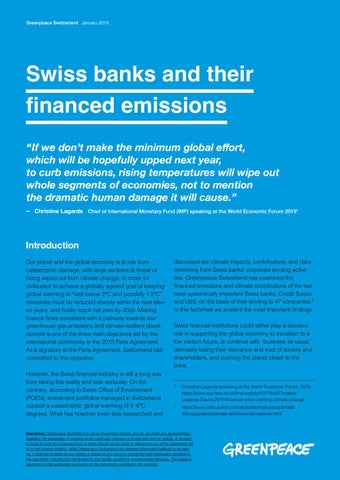 Swiss banks and their financed emissions “If we don’t make the minimum global effort, which will be hopefully upped next year, to curb emissions, rising temperatures will wipe out whole segments of economies, not to mention the dramatic human damage it will cause.”

Introduction Our planet and the global economy is at risk from catastrophic damage, with large sections at threat of being wiped out from climate change. In order for civilization to achieve a globally agreed goal of keeping global warming to “well below 2°C and possibly 1.5°C”, emissions must be reduced sharply within the next eleven years, and finally reach net zero by 2050. Making finance flows consistent with a pathway towards low greenhouse gas emissions and climate-resilient development is one of the three main objectives set by the international community in the 2015 Paris Agreement. As a signatory to the Paris Agreement, Switzerland has committed to this objective. However, the Swiss financial industry is still a long way from taking this reality and task seriously. On the contrary, according to Swiss Office of Environment (FOEN), investment portfolios managed in Switzerland support a catastrophic global warming of 4 - 6°C degrees. What has however been less researched and

discussed are climate impacts, contributions, and risks stemming from Swiss banks’ corporate lending activities. Greenpeace Switzerland has examined the financed emissions and climate contributions of the two most systemically important Swiss banks, Credit Suisse and UBS, on the basis of their lending to 47 companies.2 In this factsheet we present the most important findings. Swiss financial institutions could either play a decisive role in supporting the global economy to transition to a low carbon future, or continue with “business as usual,” ultimately losing their relevance and trust of society and shareholders, and pushing the planet closer to the brink.

Disclaimer: Greenpeace Switzerland is not an investment advisor, and do not make any representation regarding the advisability of investing in any particular company or investment fund or vehicle. A decision to invest in such an investment fund or entity should not be made in reliance on any of the statements set for in this investor briefing. While Greenpeace Switzerland has obtained information believed to be reliable, it shall not be liable for any claims or losses of any nature in connection with information obtained in this document, including but not limited to, lost profits, punitive or consequential damages. The opinions expressed in this publication are based on the documents specified in the endnote.

In 2017, two years after the adoption of the Paris Agreement, the emissions financed by the two banks reached a peak of 93.9 million tonnes of CO2e (see chart 2). By financing just the 47 companies that are the focus of this study, the two banks were responsible for around twice as many greenhouse gas emissions in 2017 as the entire population and all industries in Switzerland combined.

The analysis of the financing of just 47 companies active in the field of extreme fossil fuels (coal, oil from tar sands, from the Arctic and from deep water drilling, and liquefied natural gas (LNG)) shows that both major Swiss banks, Credit Suisse and UBS, are providing billions to some of the most carbon intensive companies and projects in the world. In sum, between 2015 and 2017, Credit Suisse and 1. UBS have committed approximately $12.3 billion to 47 companies that operate in extreme fossil fuels – UBS with $ 4.5 billion than Credit Suisse with $ 7.8 billion. Whereas UBS decreased financing to such companies between 2015 and 2017 in absolute terms, CS increased absolute financing between 2015 and 2017. The decline at UBS is the consequence of reduced financing of oil, coal power and coal mining. The increase at CS mainly results from a steep increase of financing provided to coal mining industry from 2016 to 2017 (see chart 1). Chart 1

Credit Suisse was responsible for the lion‘s share of financed emissions in 2017, with 82.6 million tonnes CO2e (see table 1). Approximately 67.2 million tonnes of 2: CO e came from the bank’s financing of coal, which 2 saw a 16 times increase from 2016. Thus, in 2017 Credit Suisse alone has contributed to more than twice as many climate-damaging emissions as Switzerland emits annually through total energy use4. Total amount of financed emissions to these 47 companies by Credit Suisse and UBS between 2015 and 2017 would lead to an increase of global temperatures by 0.0001293345°C. Despite the very green-sounding public relations campaigns of these banks, that is not what climate action looks like. Chart 2 100,000,000 80,000,000

Table 1 - Emissions resulting from financing such activities in t CO2e: 2015

… and many of these companies lobby against climate action Of the 47 companies surveyed, eleven are actively supporting climate denial lobbying efforts which seek to prevent or water down climate action and regulation. Only the company Enel is known to have distanced itself from such lobbying activities. Little or no reliable information was available regarding the lobbying activities of many of the companies analysed in this report, but at least 42.2 % of the total extreme fossil fuel financing by UBS and 28.7 % by CS was provided to companies which are known to engage in climate denial lobbying. Unsurprisingly, only two of the funded companies have a Science Based Target (SBT)5 – Enel and NRG Energy.

Many companies are exposed to short and long-term physical risks due to climate change Some financial regulators have been warning that physical and transition (regulatory) impacts of climate change may pose material risk to banks’ loan portfolios. There is no hiding from the fact that we are already experiencing increasing impacts of climate change. The more time we waste on stalling to get the greenhouse gas emissions and run away climate change under control, the more irrevocable changes will get locked in. Physical risk is the risk resulting from climate variability, extreme events, and longer-term shifts in climate patterns which are already underway. Whilst in many cases climate physical risk of a company or project might be covered by insurance, many insurance companies have already warned that a 3 or 4°C world becomes uninsurable.6 In the meantime, after a row of bad hurricane, flooding and wildfires seasons,

Science-based targets provide companies with a clearly defined pathway to future-proof growth by specifying how much and how quickly they need to reduce their greenhouse gas emissions. Learn more here: https://sciencebasedtargets.org/what-is-ascience-based-target/

% of finance provided by CS to companies at hand exposed to low or medium physical risk: long-term 100%

% of finance provided by UBS to companies at hand exposed to low or medium physical risk: long-term

Chart 7 % of finance provided by UBS to companies at hand exposed to medium or high physical risk: short-term 80% 60% 40%

insurance premiums are already on the rise. If left unchecked, physical risk could manifest in material degradation of financial health of the impacted companies, thus causing potential defaults on their loans to the banks. 34 companies analyzed are exposed to climate-related physical risks, with different time horizons. Depending on their sector and region, these companies have been prescribed characteristic physical risk levels relating to their exposure to long term climate change and catastrophic events.7

% of finance provided by CS to companies at hand exposed to medium or high physical risk: short-term

Tip of the iceberg Looking at Credit Suisse and UBSâ&#x20AC;&#x2122; financing of just 47 companies in the field of extreme fossil energy makes it clear that their financing has enormous climate impacts. If the analysis included the funding of conventional fossil fuels as well as other carbon intensive clients,the overall climate impact of these two banks would be much higher. Greenpeace Switzerland January 2019

Due to the absence of mandatory climate risk reporting rules, only a few progressive financial institutions in Europe have started analyzing and reporting how their business activities are both contributing to and exposing the bank to climate change – and are adjusting their business model to impeding climate reality.

• End all financing to mining companies with more than 20 MT of coal mined annually and /or 30 % of revenues attributed to thermal coal mining. • End all financing to companies and projects which violate FPIC and international indigenous rights conventions. • Phase out and exclude financing for companies with tar sands expansion plans or more than 30 % of their business in tar sands (production, exploration, transportation), as well as finance for tar sands directly. • Phase out and exclude new financing for companies expanding in extreme fossil fuels, like arctic oil, ultra-deepwater oil, LNG export.