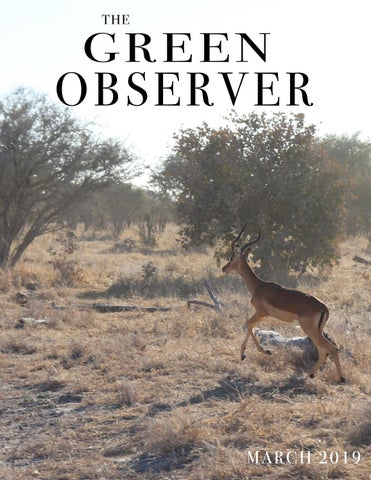 PATCH HIM UP by RMV

WHAT IS YOUR FAVORITE OUTDOOR SPACE?

WHAT ARE YOUR ENVIRONMENTAL NEW YEARâ&#x20AC;&#x2122;S RESOLUTIONS?

Patch Him Up 64-year old male presents to the ED: He’s overdosed on black tar heroin and coal tar Choked on cheeseburgers, electric bills and Percocet He was baptized in lead-filled waters Raised to hate and fear God, communists, and women Hasn’t taken a breath without coughing since 1989 What’re you gonna do about that, doc? How’re you gonna take the poison back out? R.M.V.

HORSESHOE BEND The water nurtures and mends. It is life, it creates life, it feeds life. In a land barren and devoid, a wound gushes. Springing forth from beneath the crust. The bright green algae against dark blue abyss, skirting around the edges of cliff-face. The flow begins to crawl, begins to trickle. We look at its stillness in a mirror. Up on our thrones I can feel the serenity of the scene crack. Frantic attempts to restrain the thought that settles in our skulls. Dig deep into our damp pockets. My hand brushes against a wooden stake. “Mark this spot we’ll make it our home.”

At five o’clock in the evening, the beach is nearly deserted in anticipation of the coming storm, the air heavy with moisture and electricity and just the slightest bit too cold. Humidity sticks my hair to my forehead. My aunt and I walk my dog, Bella, at a leisurely pace, our footprints swallowed by the sand as soon as they form. When we pause to rest, Bella lays down in the grassy dunes, silky black hair fanning out beneath her body like a pool of spilled ink against the yellow. The beach seems eerily desolate, but it must’ve been crowded earlier: forgotten toys and the occasional sun-bleached towel litter the shoreline, garbage bins overflow, and the faint scent of corn dogs and soda from the concession stands lingers on the breeze. The horizon is dark with clouds, vast and unyielding like a slab of concrete. In the fading daylight, the lake appears black, occasional flashes of lightning reflecting off the surface in webs of silver and blue. Angry waves slam against the pier in the distance, the sound competing with increasingly loud thunder. A few stray seagulls squawk nervously and fly in panicked circles above the sand. Bella tracks their paths lazily with her eyes, then lays her head back down with a sigh, evidently deciding the birds aren’t a threat. Knowing the rain is coming, the wind tries to warn us, tugging insistently at our clothes and hair, whispering restlessly through the tall grass. Instead of leaving, we make our way down to the shore, removing our shoes as we go. Frigid water bites at our bare feet as we watch the clouds shift ever-closer. My aunt finds a length of polished driftwood among the shells, admiring it briefly before throwing it for Bella to chase. She splashes through the tide happily, seemingly ignorant or indifferent to the oncoming weather. -8-

Iâ&#x20AC;&#x2122;ve visited this beach dozens of times before, but Iâ&#x20AC;&#x2122;ve never seen it as it is now, suspended in an ethereal backdrop of deep blues and purples. At the end of the beach, large rocks jut out from the surf, crooked and menacing. But they glisten in the pale light filtering through the clouds, and I realize there is something delicately pretty in the imperfection of the scene. A comfortable silence falls between my aunt and me as we look across the lake, each of us lost in our own thoughts. I tug on the sleeves of my hoodie as an especially forceful gust of wind chills the air further. Mist blows off the lake and clings to our skin in small teardrops. The earth seems to hold its breath, passing moments measured only in mismatched heartbeats and quiet wonder. Suddenly the sky splits open with a deafening sigh, rain slanting downwards at a harsh angle. Sleek silver drops scatter like pearls across the surface of the lake, adding to the turmoil among the already choppy waves. I tilt my head upwards, feeling unexpectedly vulnerable in the ferocity of the storm. But the rain is surprisingly gentle as it soaks through our clothes and cools our faces. After all, the storm is just a fragile balance between beauty and chaos.

There’s nothing like a little wintertime sniffle to remind you just how fragile the human body is. It hit me a little while ago, as I sat in an auditorium echoing with each new cough or sneeze emboldened by the previous chorus. This time of year, the anxiety of disrupting class with respiratory outbursts seems to have left with the monarchs, likely leading to more cases of the sniffles in others. In that lecture, I could only think about some research a friend of mine does on air quality in swine farms. The thought that the auditorium could use a little environmental engineering is entertaining, but I think that it speaks generally to the way people forget about their environment until it’s a problem. When I’m well rested, under low stress, and eating enough vegetables to make anybody’s mother proud, I don’t worry much at all about getting sick because of the condition of my body. This isn’t the case when I’ve been having a hard time. During the usual ritual of midterms, I know that the lack of sleep and a shift to a mostly coffee-and-pasta-based diet will probably kill me if I keep it up. It’s in this more vulnerable state that I start to become aware of what’s going on around me. The conditions that people live in with respect to their environment dramatically change their consciousness of it. I remember visiting one of my brothers who was living on a canal in rural Louisiana not far from from an industrial processing plant that had something to do with aluminum salts. My brother often ate fish and frogs out of that canal but was hesitant to make it a large component of his diet because the area had a history of heavy metal pollution. If my brother had more money for food at the time, the health ramifications of eating from the river wouldn’t have been nearly as relevant because there wouldn’t have been a need for more protein in his diet. Though my brother has always been ecologically conscious, it was his financial vulnerability in this situation that gave him no choice but to be aware of the conditions around him. Physical vulnerability is often even more convincing than financial vulnerability. Much of California has recently been forced by wildfires to acknowledge the state of their forests. The ecosystems that were once taken care of by the indigenous peoples have been mismanaged for a hundred years, and they are now a serious danger to the people living there.

What were once ritually managed controlled burns that eliminated fuel sources without damaging old growth native trees have turned to periodic tsunamis of fire that cover football fields in minutes. Many people knew about the collapse of the California old-growth forest ecosystem as it was happening, but the population as a whole had no real reason to acknowledge it until people were directly impacted by it. It begs the question: is there a way to get people to care about a problem before they feel the effects of it? Looking at the Hudson or the Thames, the answer seems awfully grim. These rivers had to become cesspools before anything was done about their condition. In the midwest, some rivers had to burst into flames more than once before anything was done about the industrial pollution being dumped into them. Dan Egan’s The Death and Life of The Great Lakes describes the how cities from Chicago to Buffalo were experiencing this problem, and how nobody took any action until a shipyard burned down. Though this is horrifying, these rivers have made an immense recovery since the days of the robber barons. People fish in the Chicago River today. This kind of progress is only possible as a result of legislation and large-scale technical solutions following public outrage. I believe in the power of regulation and engineering to save the condition of the world around us. What scares me is the idea that by the time we’ve started feeling the effects of climate change on a scale that makes people care, the problem will be too large to tackle. Much like coming down with the flu, it makes much more sense to prevent the illness than trying to treat it after you’ve already gotten sick. By amplifying the stories of how people are affected by their environment, it’s possible to make others aware of the symptoms that we’ll all be experiencing unless something is done. Once the message is loud enough, the responsibility of ecological consciousness will shift from the average person to people in positions of power who can enact large scale, organized solutions to environmental issues. 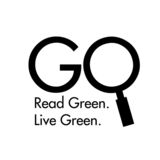