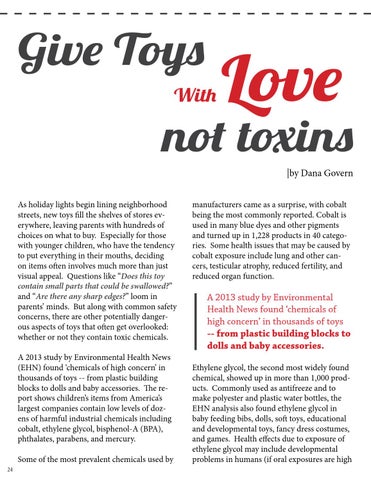 not toxins |by Dana Govern As holiday lights begin lining neighborhood streets, new toys fill the shelves of stores everywhere, leaving parents with hundreds of choices on what to buy. Especially for those with younger children, who have the tendency to put everything in their mouths, deciding on items often involves much more than just visual appeal. Questions like “Does this toy contain small parts that could be swallowed?” and “Are there any sharp edges?” loom in parents’ minds. But along with common safety concerns, there are other potentially dangerous aspects of toys that often get overlooked: whether or not they contain toxic chemicals. A 2013 study by Environmental Health News (EHN) found ‘chemicals of high concern’ in thousands of toys -- from plastic building blocks to dolls and baby accessories. The report shows children’s items from America’s largest companies contain low levels of dozens of harmful industrial chemicals including cobalt, ethylene glycol, bisphenol-A (BPA), phthalates, parabens, and mercury. Some of the most prevalent chemicals used by 24

manufacturers came as a surprise, with cobalt being the most commonly reported. Cobalt is used in many blue dyes and other pigments and turned up in 1,228 products in 40 categories. Some health issues that may be caused by cobalt exposure include lung and other cancers, testicular atrophy, reduced fertility, and reduced organ function.

A 2013 study by Environmental Health News found ‘chemicals of high concern’ in thousands of toys -- from plastic building blocks to dolls and baby accessories. Ethylene glycol, the second most widely found chemical, showed up in more than 1,000 products. Commonly used as antifreeze and to make polyester and plastic water bottles, the EHN analysis also found ethylene glycol in baby feeding bibs, dolls, soft toys, educational and developmental toys, fancy dress costumes, and games. Health effects due to exposure of ethylene glycol may include developmental problems in humans (if oral exposures are high 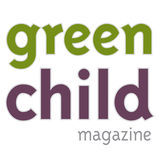 Your one stop guide to celebrating the holidays sustainably. Our Holiday 2013 issue is filled with festive ideas to bring both fun and meani...

Your one stop guide to celebrating the holidays sustainably. Our Holiday 2013 issue is filled with festive ideas to bring both fun and meani...