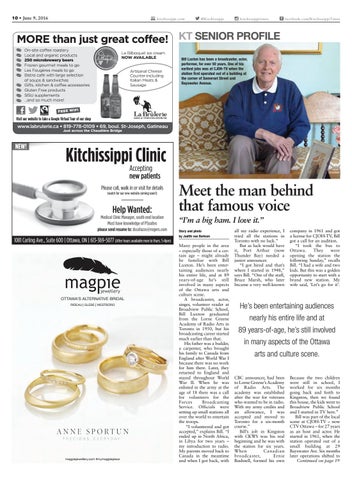 Bill Luxton has been a broadcaster, actor, performer, for over 50 years. One of his earliest jobs was at CJOH-TV when the station first operated out of a building at the corner of Somerset Street and Bayswater Avenue.

Please call, walk in or visit for details (watch for our new website coming soon!)

Meet the man behind that famous voice “I’m a big ham. I love it.” Story and photo by Judith van Berkom

Many people in the area – especially those of a certain age – might already be familiar with Bill Luxton. He’s been entertaining audiences nearly his entire life, and at 89 years-of-age he’s still involved in many aspects of the Ottawa arts and culture scene. A broadcaster, actor, singer, volunteer reader at Broadview Public School, Bill Luxton graduated from the Lorne Greene Academy of Radio Arts in Toronto in 1950, but his broadcasting career started much earlier than that. His father was a builder, a carpenter, who brought his family to Canada from England after World War I because there was no work for him there. Later, they returned to England and stayed throughout World War II. When he was enlisted in the army at the age of 18 there was a call for volunteers for the Forces Broadcasting Service. Officials were setting up small stations all over the world to entertain the troops. “I volunteered and got accepted,” explains Bill. “I ended up in North Africa, in Libya for two years – my introduction to radio. My parents moved back to Canada in the meantime and when I got back, with

all my radio experience, I tried all the stations in Toronto with no luck.” But as luck would have it, Port Arthur (now Thunder Bay) needed a junior announcer. “I got hired and that’s where I started in 1948,” says Bill. “One of the staff, Bruce Marsh, who later became a very well-known

company in 1961 and got a license for CJOH-TV, Bill got a call for an audition. “I took the bus to Ottawa. They were opening the station the following Sunday,” recalls Bill. “I had a wife and two kids. But this was a golden opportunity to start with a brand new station. My wife said, ‘Let’s go for it’.

He’s been entertaining audiences nearly his entire life and at 89 years-of-age, he’s still involved in many aspects of the Ottawa arts and culture scene. CBC announcer, had been to Lorne Greene’s Academy of Radio Arts. The academy was established after the war for veterans who wanted to be in radio. With my army credits and an allowance, I was accepted and moved to Toronto for a six-month course.” Bill’s job in Kingston with CKWS was his real beginning and he was with the station for six years. When Canadian broadcaster, Ernie Bushnell, formed his own

Because the two children were still in school, I worked for six months going back and forth to Kingston, then we found this house, the kids went to Broadview Public School and I started in TV here.” Bill was part of the local scene at CJOH-TV – now CTV Ottawa – for 27 years as an host and actor. He started in 1961, when the station operated out of a small building at 29 Bayswater Ave. Six months later operations shifted to Continued on page 19