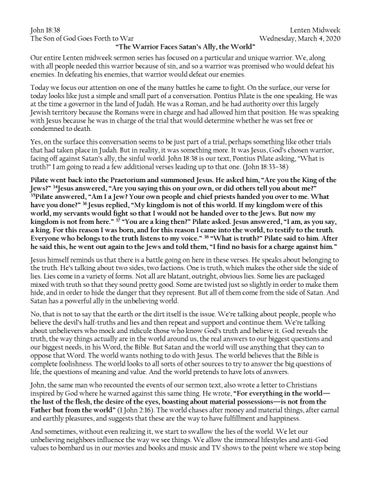 John 18:38 Lenten Midweek The Son of God Goes Forth to War Wednesday, March 4, 2020 “The Warrior Faces Satan’s Ally, the World” Our entire Lenten midweek sermon series has focused on a particular and unique warrior. We, along with all people needed this warrior because of sin, and so a warrior was promised who would defeat his enemies. In defeating his enemies, that warrior would defeat our enemies. Today we focus our attention on one of the many battles he came to fight. On the surface, our verse for today looks like just a simple and small part of a conversation. Pontius Pilate is the one speaking. He was at the time a governor in the land of Judah. He was a Roman, and he had authority over this largely Jewish territory because the Romans were in charge and had allowed him that position. He was speaking with Jesus because he was in charge of the trial that would determine whether he was set free or condemned to death. Yes, on the surface this conversation seems to be just part of a trial, perhaps something like other trials that had taken place in Judah. But in reality, it was something more. It was Jesus, God’s chosen warrior, facing off against Satan’s ally, the sinful world. John 18:38 is our text, Pontius Pilate asking, “What is truth?” I am going to read a few additional verses leading up to that one. (John 18:33–38) Pilate went back into the Praetorium and summoned Jesus. He asked him, “Are you the King of the Jews?” 34Jesus answered, “Are you saying this on your own, or did others tell you about me?” 35Pilate answered, “Am I a Jew? Your own people and chief priests handed you over to me. What have you done?” 36 Jesus replied, “My kingdom is not of this world. If my kingdom were of this world, my servants would fight so that I would not be handed over to the Jews. But now my kingdom is not from here.” 37 “You are a king then?” Pilate asked. Jesus answered, “I am, as you say, a king. For this reason I was born, and for this reason I came into the world, to testify to the truth. Everyone who belongs to the truth listens to my voice.” 38 “What is truth?” Pilate said to him. After he said this, he went out again to the Jews and told them, “I find no basis for a charge against him.” Jesus himself reminds us that there is a battle going on here in these verses. He speaks about belonging to the truth. He’s talking about two sides, two factions. One is truth, which makes the other side the side of lies. Lies come in a variety of forms. Not all are blatant, outright, obvious lies. Some lies are packaged mixed with truth so that they sound pretty good. Some are twisted just so slightly in order to make them hide, and in order to hide the danger that they represent. But all of them come from the side of Satan. And Satan has a powerful ally in the unbelieving world. No, that is not to say that the earth or the dirt itself is the issue. We’re talking about people, people who believe the devil’s half-truths and lies and then repeat and support and continue them. We’re talking about unbelievers who mock and ridicule those who know God’s truth and believe it. God reveals the truth, the way things actually are in the world around us, the real answers to our biggest questions and our biggest needs, in his Word, the Bible. But Satan and the world will use anything that they can to oppose that Word. The world wants nothing to do with Jesus. The world believes that the Bible is complete foolishness. The world looks to all sorts of other sources to try to answer the big questions of life, the questions of meaning and value. And the world pretends to have lots of answers. John, the same man who recounted the events of our sermon text, also wrote a letter to Christians inspired by God where he warned against this same thing. He wrote, “For everything in the world— the lust of the flesh, the desire of the eyes, boasting about material possessions—is not from the Father but from the world” (1 John 2:16). The world chases after money and material things, after carnal and earthly pleasures, and suggests that these are the way to have fulfillment and happiness. And sometimes, without even realizing it, we start to swallow the lies of the world. We let our unbelieving neighbors influence the way we see things. We allow the immoral lifestyles and anti-God values to bombard us in our movies and books and music and TV shows to the point where we stop being

concerned about them. We let people convince us that we don’t need to worry about what is ultimately true or real if we just follow the way that we feel at any given time or moment. We allow the world to ask the same question that Pilate did, “What is truth?” And that question suggests that either there is no way to know the truth or quite possibly the truth is different for everyone because we all have our own feelings about things. The biggest problem with all of this is what John goes on to say in that same letter I just quoted, in the very next verse it says, “The world and its desires pass away, but the one who does the will of God remains forever” (1 John 2:17). We are designed for something far better and far bigger than just this earth: we are designed to be in an eternal relationship with our Creator, our Savior, our faith-giving God! But Satan and the world want us to concentrate on what passes away, things like wealth and pleasure, even our earthly lives themselves. They want us to turn our eyes away from the truth about sin, death, and our need for salvation. No wonder Jesus was constantly up against rejection and opposition. His own fellow Jews, and the religious leaders, and politicians, all of the structures of this sinful world were ganging up against him! And he calmly and carefully – at his trial as well as throughout his life – he calmly and confidently faced off against them. “I am, as you say, a king. For this reason I was born, and for this reason I came into the world, to testify to the truth. Everyone who belongs to the truth listens to my voice.” And the world just dismisses it all. “What is truth?” The answer to that question is and always has been Jesus. He had told his disciples, “I am the Way and the Truth and the Life. No one comes to the Father, except through me” (John 14:6). Jesus is the truth. In other words, he is the only way to understand reality. He’s the only way we can possibly make sense of life. From the beginning of time and the human race to the very last day of the earth, he is the only one who will ever be able to help us see straight. Everybody has questions about reality. What can I know and how can I know it? How can I ever understand suffering and evil? Who am I? Why am I here? What can I hope? The world, of course, has millions of answers to those questions. The world’s guesses and wishes and “I thinks” all fail the test of truth. Jesus never said, “I’m guessing” or “I wish” or “I hope” or “I think” or “possibly” or “maybe.” He always spoke with complete authority. He often said, “Verily” or “Truly, I tell you . . .” or “Amen, Amen.” He was certain about truth: Jesus said to the Jews who had believed him, “If you remain in my word, you are really my disciples. You will also know the truth, and the truth will set you free” (John 8:31,32). In other words, God’s Word, the Bible, holds everything we need to know for life, to live freely without guilt and death’s curse—without the fear of God’s punishment—and, especially, to live forever free in eternity. That’s because every word in the Bible, in one way or another, points to Jesus Christ. And that’s why it is so important that my eyes see and my ears hear the dynamic Word of God! All other messages come from the Father of lies and flow through the distorted filter of the world around us. Our world is broken. We all see it and know it. People hate. Nature kills. Storms damage. Death stalks us all. I think, say, and do the evil I know I shouldn’t. I fail far too often to do the good I should. Many have tried to come up with something to fix this mess. All have failed. Except one: Jesus Christ! One sparkling, pure, perfect, holy life came into our world. Our triune God loved us so much that he planned to rescue this sin-damaged world. The Son came to tell us the whole truth and to be the truth that would battle sin, death, Satan, and a world that hates him. Throughout his entire life he remained holy so that he could trade his life for ours at the place of God’s judgment. This is the sacred truth that we believe, confess, and hold dear because it means the solution for the world’s sin and for our own personal sin. Our truth-telling Jesus gives us the certain conviction that he will take all those who trust him to live with him in heaven. This is the only reality there is.

His promise puts everything else into perspective. It gives us a worldview that is bigger than our eyes can see or what we can know. It’s an amazing window into eternity! As a child of God through faith in our Savior Jesus, who now lives in us by that same faith, look at this great promise: “You are from God, dear children, and you have overcome the false prophets, because the one in you is greater than the one in the world.” (1 John 4:4). Jesus came from above with absolute truth from heaven. Here he has battled through all the worldperverted ideas of truth in order to give us the truth he came to share. That truth has changed us. We are on his side, the side of truth. We belong to the truth. We see reality—eternal reality—in the cross and the love of God for us sinners. So our high privilege is to grow deeply in Christ through his Word, to live with consciences that are bound by that precious, good Word, and then to show and share the beautiful faith he has given us. There are two sides to this battle, and you have been enlisted to fight alongside of the truth. Jesus is that truth. Live in him, live for him, and live with him forever.

Prayer Lord Jesus, you are the great warrior that God promised to fight against all sin and evil by fighting for the truth. Help us always to be on the side of truth by listening to your voice and taking to heart what you have told us and what you have done for us. Be with us in all our battles against Satan and against his allies in the unbelieving world in which we still live. And finally take us out of this world to live with you forever, our Lord and our Savior.