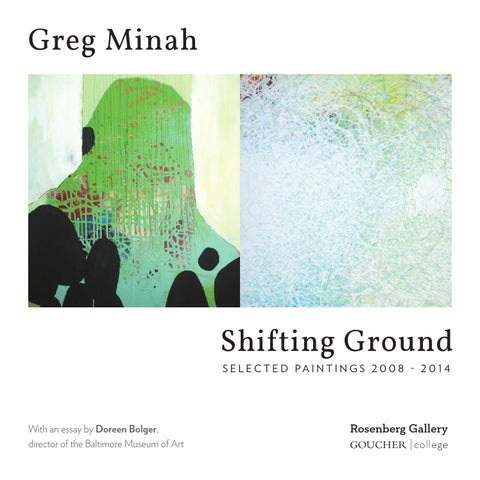 With an essay by Doreen Bolger, director of the Baltimore Museum of Art

Paint Awash on a Shifting Ground

Shifting Ground traces the trajectory of Greg Minah’s work since his sojourn at Joshua Tree Highlands Artist Residency Program in the summer of 2008—six years during which he has matured as a painter with an original creative process and a distinctive style.1 Joshua Tree National Park, at the edge of California’s Mojave Desert, offered Minah a tangible break with his native Maryland, some distance literally and figuratively from familiar people, terrain, and art, as well as an opportunity to experiment and take risks, to present himself as a more fully developed artist. The result of this residency was just what curators and jurors hope for: inspiration and a fresh, individual artistic approach.

1 For documentation of Minah’s career and work, including images, see gregminah.com.

To place all this in context, Minah’s early work—as an undergraduate and as an independent, just-out-of-school studio art major—had strong ties to Abstract Expressionism. He notes the impact of the work of Jackson Pollock (1912-1956), Willem de Kooning (1904-1997), and Mark Rothko (1903-1970), as well as to the graffiti and paintings of Jean-Michel Basquiat (1960-1988).2 Minah’s early paintings, from the beginning made with acrylics, are composed to cover the ground with shapes and patterns that move between abstraction and recognizable forms, whether figures or, for a time, ubiquitous toilet bowls.3 Then, in a new direction that began suddenly in 2003, Minah seems bent on self-destruction—or maybe just on hiding from art historians, critics, art theorists, and even viewers. He cuts his finished canvases up, sometimes in small squares or rectangles, which he arranges in mosaic-like patterns on a wall or stacks in a sculptural wooden support, only their torn edges visible. These almost take on the aspect of objects—mosaics, books, architectural fragments—rather than paintings. He photographed a fragment or “chip” on his dashboard repeatedly as he drove cross-country, a small unrecognizable landscape viewed beneath a windshield that chronicled the changing panorama and conflicting ways of life that make up our nation.4 He also videoed himself with images of his paintings projected on his face, his personal identity drowning in shimmering colors and dissolving shapes. On reflection, Minah admits that, in this phase of his career, he evinced a somewhat-unhealthy absorption in the theory of contemporary art, a self-conscious response to art history and criticism. Remember, he was an English major before he was a painter, so words are a presence in his practice!

2T his legacy remains with Minah. Even as his paintings have become more his own, he reminds us of his early attraction to Rothko by finding titles for his recent works in the older artist’s writings, preserved in his well-worn copy of The Artist’s Reality (2004). Minah underscores words and phrases in this book and uses these phrases as titles for his paintings because he considers them evocative of his current work. See Mark Rothko and Christopher Rothko, The Artist’s Reality: Philosophies of Art (New Haven, Connecticut: Yale University Press, 2004). 3 The latter is a reference to the revolutionary French-born Dada artist and writer Marcel Duchamp (1887-1968), who upended expectations for what could be true artwork with his Fountain (1917/1964, San Francisco Museum of Modern Art), a sculpture made from a found object—a urinal. 4 See Minah’s video on vimeo.com/33305263. 4

All of this seems worlds away from the paintings he does today. To fully appreciate the beautiful works that follow his time at Joshua Tree National Park, you need to understand exactly how they are created. His work emerges from a fascinating working process—it borders on performance—and from his active and intentional exploitation of the possibilities of his materials, specifically acrylic paint, which is water soluble but becomes water resistant when dry. As he puts it: “There is collaboration between my authorial intent and the process—something unexpected always happens.” He plans carefully, but remains responsive to chance. He has documented his working process in a video, allowing us to be present with him in the studio and witness how his paintings are made.5

Minah works on two or three paintings at a time, creating images that can stand singly, in pairs, or in series. Early on, the works in these groups were very different from one another, with dissimilar colors and compositions; later, they became more often closely related, almost like bodies of work, or even diptychs or triptychs. As he progresses in his work on these stretched canvases, they stand side-by-side on a narrow wooden shelf (a self-created easel), above a 10-foot-long gutter that catches dripping paint or the water he later uses to wash away areas of color. Each surface is built up in layers, with reiterative pours. The colors are mixed in plastic cups and warmed with a heat gun to eliminate bubbles, which might later distract from the effect he is striving for in the final painted surface. Minah then gives the paint a try by dripping it on a paintladen “test board” beside his room-long easel. There are stalactite-like pillars of color hanging from the bottom edge of this board, a summative record of the evolving palettes of his paintings. The first pours he makes will, of course, disappear beneath innumerable subsequent layers of paint. But as the layers build up and the final surface is approached, each pour becomes more critical.

Once a pour is made, Minah holds the painting by its wooden stretchers, where the horizontal and vertical members cross in the center of the canvas, and he tilts and moves the canvas, controlling how and where the wet paint rolls to create lines. He then waits for the paint to cure or partially cure. When its edges are dry, he often washes away the still-wet center of the dripped paint with pressurized water, resulting in delicate shapes and spidery lines. At each step—between pours, so to speak—he photographs his painting and then uses Photoshop to test the potential shape and color of the next application.6 Despite the seeming spontaneity of Minah’s work, there is incredible control, with the movement of his body in relation to the canvas determining the outcome. In an odd way, this action becomes the antithesis of Pollock’s own painterly gestures, which directed the paint to a stationary ground before or below him. Pollock moved the pigment; Minah moves the ground. In the early works at or soon after his time at Joshua Tree National Park, Minah balances the poured and shaped areas of paint with solid forms that evoke mountains or rocks or maybe even figures. In similar prejudices (2008), a mountain of bright green drips looms above a bevy of flat black rocks that seem to dance at its base. In an accretion that serves (2008), calligraphic lines of paint rain down from the sky and flow into a sinkhole on the mountain’s side, their pale blue color suggesting a celestial origin. These works read like landscapes. Over the next two years, the poured paint and Minah’s movement take over more completely, so that what we experience is more abstract—lines, sometimes dark lines, and color, often poured in contrasting or complementary shades. Occasionally, the traces of a pour remain as a circular area of flat color, as in exaggerating its virtues (2009), but increasingly, the whole surface of the painting is broken up by patterns of pigment that have been applied and washed, joined in a delicate lacy structure. In between pragmatism (2009), the circular shapes of pours are interwoven by countless layers of acrylic tendrils that seem to burst out from the center of the canvas. These patterns might fleetingly bring hints of wreaths or skeletons or even figures to mind— but not quite.

Within a few years, from 2011 to 2013, Minah is moving toward a cohesive and quite abstract surface, one where we can get lost in the sheer virtuosity of line and color, in some new place where the border between painting and drawing disappears below rolling and washed acrylic paint. The distinctly colored pours, from turquoise to dark blue to red in the scaffolding to remain (2011), soon give way to a more glowing, unified surface, in works such as traditional factors (2012). In paintings like seen as answerable (2013) or separately defined (2013), the sense of brilliant light intensifies throughout the composition. Are these nearby strobe lights or distant stars or suns? In either case, they radiate out toward the dark corners of the canvas, where they are anchored within its rectilinear confines. The colors are now becoming increasingly less separate, their edges and shapes disappearing with pour after pour, layer after layer. By 2014, vivid color recedes completely, and white becomes dominant. The patterns of light suggested by this pigment become almost blinding—for a moment, they distract us completely from the layers of color below the surface. We feel as though we are falling into the source of the radiant light itself, soon to be consumed by its heat. What is Minah’s next move? I will bet he already has inklings of it in mind—or that his ongoing acts of creation will reveal it. I for one cannot wait to experience the outcome!

Doreen Bolger Doreen Bolger has been director of the Baltimore Museum of Art since 1998. She previously served as director of the Museum of Art at the Rhode Island School of Design and has had a long curatorial career, first at the Metropolitan Museum of Art in New York City and later at the Amon Carter Museum in Fort Worth, Texas. Bolger holds a doctorate in art history from the Graduate Center of the City University of New York and has published extensively on American painting, drawing, and decorative arts.

The Rosenberg Gallery program is funded with the assistance of grants from the Maryland State Arts Council, an agency funded by the state of Maryland and the National Endowment for the Arts, and the Baltimore County Commission on the Arts and Sciences. 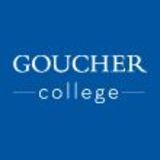