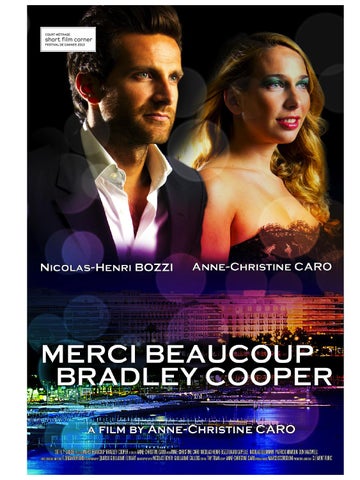 Directorâ&amp;#x20AC;&amp;#x2122;s Statement The conception of Merci beaucoup Bradley Cooper didnâ&amp;#x20AC;&amp;#x2122;t start in the glamorous Cannes but in the picturesque Flea Market in Paris where I sing every weekend. My colleague would often boast about knowing the exact look-alike of Bradley Cooper. I was very skeptical until I met Nicolas. The resemblance was absolutely striking. He recounted the numerous occasions in which people took him for Bradley Cooper, offering him champagne bottles, inviting him to parties, taking pictures with him, and I thought at one that his adventures had a potential to make a great short movie. So I started writing and came up with the character of Barbara, which is obviously inspired by some of my experiences as an actress. As soon as the script was ready it all went stupendously fast. We put a wonderful team together and left for Cannes for a guerillastyle shooting in the frenzy of the Festival. I then relocated to Los Angeles where I did the post-production with a prodigious American crew. This film means a lot to me because it is the exact illustration of my motto: with a lot of struggle and optimism, dreams do come true!

Anne-Christine Caro is a French actress, writer and singer. Merci beaucoup Bradley Cooper is her first movie as a director. She lives between Paris and Los Angeles. She speaks fluently English, French and Spanish. Anne-Christine first studied literature at the prestigious Lycée Louis-Le-Grand in Paris. She then graduated from the top rated business school ESSEC-MBA. She continued her acting training in parallel and quickly started to work as an actress on various plays and short movies. Anne-Christine also conceived and hosted her own TV show In Shape: a comedy show in which she tested new original sports each week. In 2010, director Jean-Louis Guillermou asked her to write the screenplay of his historical feature, She Who Loved Richard Wagner. She subsequently played the lead, starring opposite the world famous opera singer Roberto Alagna, and other renowned French actors such as Jean-François Balmer and Stéphane Bern. In parallel Anne-Christine continued her work as a writer for television, on the animation series Me and My Robot. In 2012, Anne-Christine wrote, directed and starred in her first short movie, Merci beaucoup Bradley Cooper, which was shot in Paris and in Cannes during the 2012 Film Festival. She then relocated to Los Angeles where she did the post-production of the movie and started working on various Independent Films.

NICOLAS-HENRI BOZZI Nicolas-Henri Bozzi is a real estate agent, owner of the agency Gotha Real Estate, specialized in exclusive properties. He lives between Paris and Marseille in the south of France. His stunning resemblance with the actor Bradley Cooper often led him to amusing and unexpected situations in real life. When Anne-Christine Caro offered him the part of Lucas, Nicolas-Henri jumped at the change of being part of the adventure. DAVID CAPELLE After completing his engineering school, David Capelle studied acting at the prestigious National Theatre of Chaillot. He then started working regularly in film and television. He was part of the famous historical TV series adapting Guy de Maupassantâ&amp;#x20AC;&amp;#x2122;s 19 th century novels. David Capelle is also part of the cast of Alexandre Castagnettiâ&amp;#x20AC;&amp;#x2122;s new feature film, Amour et Turbulences, which will premiere in France in April 2013.

NICOLAS ULLMANN Nicolas Ullman also known as Monsieur Ullmann is a famous French actor/comedian and entertainer who became an icon of the Parisian nights. Known for his amazing improvisation skills, he is also remarkable for his ability to disguise himself to the point of being completely unrecognizable. This trend-setter always knows how to surprise and charm his ever growing fan base. PHILIPPE PASQUINI Since his early age, Philippe Pasquini has been fascinated by images and what they could express. This is why he studied both acting and fine arts in Paris and Toulon. He quickly started experimental filmmaking with videos such as Dracula mix, The Me-Christ, or Poor PoseĂ?don. At the same time, he continued acting and stage designing for both theatre and film. He then joined the BlaBla Theatre Company to take part in the Collective Filmmaking Project. As an actor, Philippe has had an extensive career in theater and then became the recurring lead character of Youri in Quarxxâ&amp;#x20AC;&amp;#x2122;s movies ( Zeropolis ). Amongst his numerous talents, Philippe also designs puppets and masks.

PATRICK MIMOUN Patrick Mimoun is a renowned French actor with an extensive career in theater, film and television. In 2012, he co-starred with Gérard Depardieu in Miserere, a feature film directed by Sylvain White. Throughout his career, Patrick collaborated with some of France’s most talented directors such as Mia Hansen-Love ( Tout est pardonné), or Alain Resnais (Wild Grass). Patrick just finished shooting the last feature film of the awardwinning director Karine Albou. ALEXANDRE GELBERT After studying International Business, this media buff begins his career in advertising as a copywriter. In 1996, he discovers Télé Bocal (Jar TV) and becomes one of the active members of this start up. Three years later, Alexandre Gelbert is offered the direction of content of the first Internet TV Channel, Canalweb. In 2001, Alexandre creates his own production company and starts working on various eclectic and fascinating projects: creation of the TV Channel Paris Cap, production of TV commercials (for the mobile phone company SFR), institutional films, fictions, creation of an economy web TV (Ecoplus TV), cooking shows. In 2012, he creates the company Media et Caetera with his long time friend François Graux. They unite their skills and experience to offer new content dedicated to the new media and new platforms.

FLORIAN RIFFARD Florian Riffard is originally from Grenoble in the south of France. He is a young First Assistant Director who already has an extensive experience in film with both features and short movies. Anne-Christine Caro and Florian met on the set of She Who Loved Richard Wagner. Their collaboration went so well that she immediately thought of him for Merci beaucoup Bradley Cooper. Florian had also already collaborated with Quarxx on his movie Zeropolis. This is how the original trio was formed. Florian is also a filmmaker, and his filmography as a director includes Space Cake, Virtually Disturbing, and Under Control. As First AD, Florian just finished shooting the short movie ClĂŠlia directed by Bruno Cellier. QUARXX Quarxx is a French filmmaker, painter and photographer. He has lived in Los Angeles, Indonesia and Paris where he is represented by the famous art gallery Adler. His work has been exhibited around the world. His eccentric vision, his colorful and exuberant universe made him one of the major figures of the underground Parisian art scene. Quarxx directed numerous films amongst which the critically acclaimed Marginal Tango in 2010. He then created the trilogy Dirty Maurice , Rasta Kamikaze Bang Bang (Sundance 2010) and Zeropolis (Cannes Film Festival Short Film Corner 2012) in which we follow his nihilist and anti-conformist loser heroes. Quarxx is currently working in Paris on the post-production of his new feature film, Dark Knight.

THY TRAN Since moving to Los Angeles in 2009, Thy Tran has been actively involved in the indie filmmaking scene. He has worked on various feature films such as The Rambler (Sundance 2012) starring Dermot Mulroney and Lindsay Pulsipher, Carlos Spills the Beans directed by Brian McGuire, and 9 Full Moons directed by Tomer Almagor, starring Bret Roberts and Amie Seimetz. He has also collaborated on the award-winning documentary Barbershop Punk , which explores Freedom of Speech on the Internet. Thy has just finished the shooting of the feature film The Amateur directed by Carlton Sugarman. The film exposes the chaotic journey of East L.A. indie musicians, featuring music from local talents such as Dave Krusen, original drummer of Pearl Jam, Bill Wadhams of Animotion, and The Moving Units. Thy is currently writing his first feature, which he aims to direct. MARCO SCORSOLINI Marco Scorsolini is an Italian music composer. He studied piano since his early age in Rome. He then moved to Boston where he graduated summa cum laude from the Berklee College of Music with a major in Film Scoring and Composition. Marco then relocated to Los Angeles where he started collaborating with various independent filmmakers. He is the composer of the two original tracks of the movie Merci beaucoup Bradley Cooper.

In 2012, Anne-Christine wrote, directed and starred in her first short movie, Merci beaucoup Bradley Cooper, which was shot in Paris and in Cannes during the 2012 Film Festival. The Short will screen at Cannes Court Metrage 2013.