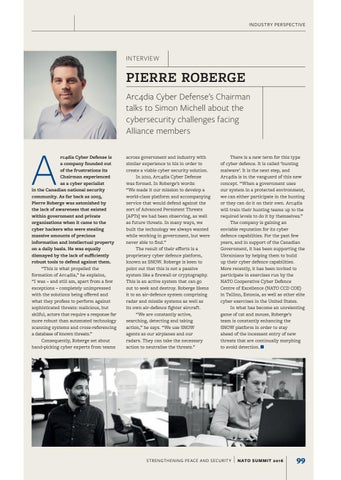 rc4dia Cyber Defense is a company founded out of the frustrations its Chairman experienced as a cyber specialist in the Canadian national security community. As far back as 2003, Pierre Roberge was astonished by the lack of awareness that existed within government and private organisations when it came to the cyber hackers who were stealing massive amounts of precious information and intellectual property on a daily basis. He was equally dismayed by the lack of sufficiently robust tools to defend against them. “This is what propelled the formation of Arc4dia,” he explains, “I was – and still am, apart from a few exceptions – completely unimpressed with the solutions being offered and what they profess to perform against sophisticated threats: malicious, but skilful, actors that require a response far more robust than automated technology scanning systems and cross-referencing a database of known threats.” Consequently, Roberge set about hand-picking cyber experts from teams

across government and industry with similar experience to his in order to create a viable cyber security solution. In 2010, Arc4dia Cyber Defense was formed. In Roberge’s words: “We made it our mission to develop a world-class platform and accompanying service that would defend against the sort of Advanced Persistent Threats [APTs] we had been observing, as well as future threats. In many ways, we built the technology we always wanted while working in government, but were never able to find.” The result of their efforts is a proprietary cyber defence platform, known as SNOW. Roberge is keen to point out that this is not a passive system like a firewall or cryptography. This is an active system that can go out to seek and destroy. Roberge likens it to an air-defence system comprising radar and missile systems as well as its own air-defence fighter aircraft. “We are constantly active, searching, detecting and taking action,” he says. “We use SNOW agents as our airplanes and our radars. They can take the necessary action to neutralise the threats.”

There is a new term for this type of cyber defence. It is called ‘hunting malware’. It is the next step, and Arc4dia is in the vanguard of this new concept. “When a government uses our system in a protected environment, we can either participate in the hunting or they can do it on their own. Arc4dia will train their hunting teams up to the required levels to do it by themselves.” The company is gaining an enviable reputation for its cyber defence capabilities. For the past few years, and in support of the Canadian Government, it has been supporting the Ukrainians by helping them to build up their cyber defence capabilities. More recently, it has been invited to participate in exercises run by the NATO Cooperative Cyber Defence Centre of Excellence (NATO CCD COE) in Tallinn, Estonia, as well as other elite cyber exercises in the United States. In what has become an unrelenting game of cat and mouse, Roberge’s team is constantly enhancing the SNOW platform in order to stay ahead of the incessant entry of new threats that are continually morphing to avoid detection.