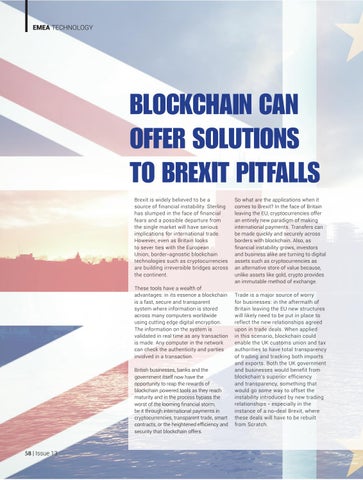 BLOCKCHAIN CAN OFFER SOLUTIONS TO BREXIT PITFALLS Brexit is widely believed to be a source of financial instability. Sterling has slumped in the face of financial fears and a possible departure from the single market will have serious implications for international trade. However, even as Britain looks to sever ties with the European Union, border-agnostic blockchain technologies such as cryptocurrencies are building irreversible bridges across the continent. These tools have a wealth of advantages: in its essence a blockchain is a fast, secure and transparent system where information is stored across many computers worldwide using cutting edge digital encryption. The information on the system is validated in real time as any transaction is made. Any computer in the network can check the authenticity and parties involved in a transaction. British businesses, banks and the government itself now have the opportunity to reap the rewards of blockchain powered tools as they reach maturity and in the process bypass the worst of the looming financial storm, be it through international payments in cryptocurrencies, transparent trade, smart contracts, or the heightened efficiency and security that blockchain offers.

So what are the applications when it comes to Brexit? In the face of Britain leaving the EU, cryptocurrencies offer an entirely new paradigm of making international payments. Transfers can be made quickly and securely across borders with blockchain. Also, as financial instability grows, investors and business alike are turning to digital assets such as cryptocurrencies as an alternative store of value because, unlike assets like gold, crypto provides an immutable method of exchange. Trade is a major source of worry for businesses: in the aftermath of Britain leaving the EU new structures will likely need to be put in place to reflect the new relationships agreed upon in trade deals. When applied in this scenario, blockchain could enable the UK customs union and tax authorities to have total transparency of trading and tracking both imports and exports. Both the UK government and businesses would benefit from blockchainâ&amp;#x20AC;&amp;#x2122;s superior efficiency and transparency, something that would go some way to offset the instability introduced by new trading relationships - especially in the instance of a no-deal Brexit, where these deals will have to be rebuilt from Scratch.