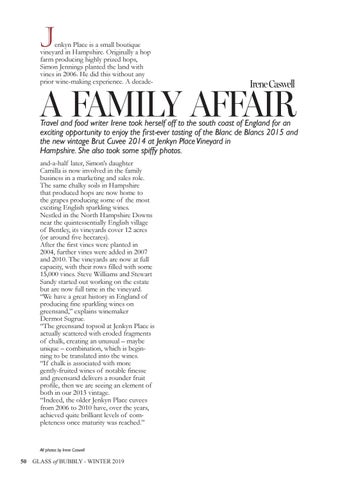 enkyn Place is a small boutique vineyard in Hampshire. Originally a hop farm producing highly prized hops, Simon Jennings planted the land with vines in 2006. He did this without any prior wine-making experience. A decade-

Travel and food writer Irene took herself off to the south coast of England for an exciting opportunity to enjoy the first-ever tasting of the Blanc de Blancs 2015 and the new vintage Brut Cuvee 2014 at Jenkyn Place Vineyard in Hampshire. She also took some spiffy photos. and-a-half later, Simon’s daughter Camilla is now involved in the family business in a marketing and sales role. The same chalky soils in Hampshire that produced hops are now home to the grapes producing some of the most exciting English sparkling wines. Nestled in the North Hampshire Downs near the quintessentially English village of Bentley, its vineyards cover 12 acres (or around five hectares). After the first vines were planted in 2004, further vines were added in 2007 and 2010. The vineyards are now at full capacity, with their rows filled with some 15,000 vines. Steve Williams and Stewart Sandy started out working on the estate but are now full time in the vineyard. “We have a great history in England of producing fine sparkling wines on greensand,” explains winemaker Dermot Sugrue. “The greensand topsoil at Jenkyn Place is actually scattered with eroded fragments of chalk, creating an unusual – maybe unique – combination, which is beginning to be translated into the wines. “If chalk is associated with more gently-fruited wines of notable finesse and greensand delivers a rounder fruit profile, then we are seeing an element of both in our 2013 vintage. “Indeed, the older Jenkyn Place cuvees from 2006 to 2010 have, over the years, achieved quite brilliant levels of completeness once maturity was reached.”

All photos by Irene Caswell