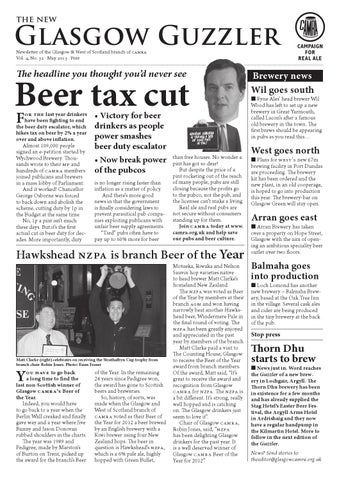 Beer tax cut F or the last year drinkers have been ﬁghting to end the beer duty escalator, which hikes tax on beer by 2% a year over and above inﬂation. Almost 109,000 people signed an e-petition started by Wychwood Brewery. Thousands wrote to their MP and hundreds of CAMRA members joined publicans and brewers in a mass lobby of Parliament. And it worked! Chancellor George Osborne was forced to back down and abolish the scheme, cutting duty by 1p in the Budget at the same time. No, 1p a pint isn’t much these days. But it’s the ﬁrst actual cut in beer duty for decades. More importantly, duty

is no longer rising faster than inﬂation as a matter of policy. And there’s more good news in that the government is ﬁnally considering laws to prevent parasitical pub companies exploiting publicans with unfair beer supply agreements. “Tied” pubs often have to pay up to 60% more for beer

than free houses. No wonder a pint has got so dear! But despite the price of a pint rocketing out of the reach of many people, pubs are still closing because the proﬁts go to the pubco, not the pub, and the licensee can’t make a living. Real ale and real pubs are not secure without consumers standing up for them. Join CAMRA today at www. camra.org.uk and help save our pubs and beer culture.

Hawkshead NZPA is branch Beer of the Year

ou have to go back a long time to ﬁnd the last non-Scottish winner of Glasgow CAMRA’s Beer of the Year. Indeed, you would have to go back to a year when the Berlin Wall creaked and ﬁnally gave way and a year where Jive Bunny and Jason Donovan rubbed shoulders in the charts. The year was 1989 and Pedigree, made by Marston’s of Burton on Trent, picked up the award for the branch’s Beer

of the Year. In the remaining 24 years since Pedigree won, the award has gone to Scottish beers and breweries. So, history, of sorts, was made when the Glasgow and West of Scotland branch of CAMRA voted as their Beer of the Year for 2012 a beer brewed by an English brewery with a Kiwi brewer using four New Zealand hops. The beer in question is Hawkshead’s NZPA, which is a 6% pale ale, highly hopped with Green Bullet,

Motueka, Riwaka and Nelson Sauvin hop varieties native to head brewer Matt Clarke’s homeland New Zealand. The NZPA was voted as Beer of the Year by members at their branch AGM and won having narrowly beat another Hawkshead beer, Windermere Pale in the ﬁnal round of voting. The NZPA has been greatly enjoyed and appreciated in the past year by members of the branch. Matt Clarke paid a visit to The Counting House, Glasgow to receive the Beer of the Year award from branch members. Of the award, Matt said, “It’s great to receive the award and recognition from Glasgow CAMRA for NZPA. The NZPA is a bit diﬀerent. It’s strong, really well hopped and is catching on. The Glasgow drinkers just seem to love it”. Chair of Glasgow CAMRA, Robin Jones, said, “NZPA has been delighting Glasgow drinkers for the past year. It is a well deserved winner of Glasgow CAMRA Beer of the Year for 2012”.

■ Fyne Ales’ head brewer Wil Wood has left to set up a new brewery in Great Yarmouth, called Lacon’s after a famous old brewery in the town. The ﬁrst brews should be appearing in pubs as you read this…

■ Plans for West’s new £7m brewing facility in Port Dundas are proceeding. The brewery kit has been ordered and the new plant, in an old cooperage, is hoped to go into production this year. The brewery-bar on Glasgow Green will stay open.

■ Arran Brewery has taken over a property on Hope Street, Glasgow with the aim of opening an ambitious speciality beer outlet over two ﬂoors.

■ Loch Lomond has another new brewery – Balmaha Brewery, based at the Oak Tree Inn in the village. Several cask ales and cider are being produced in the tiny brewery at the back of the pub.

■ News just in. Word reaches the Guzzler of a new brewery in Lochgair, Argyll. The Thorn Dhu brewery has been in existence for a few months and has already supplied the Stag Hotel’s Easter Beer Festival, the Argyll Arms Hotel in Ardrishaig and they now have a regular handpump in the Kilmartin Hotel. More to follow in the next edition of the Guzzler. News? Send stories to: theeditor@glasgowcamra.org.uk

Hippo sighted in the west end

■ Eyebrows were raised recently when a new bottled beer from Traditional Scottish Ales, Raj IPA, was released. This did not go down well at Tryst Brewery eight miles down the road in Larbert, who have been brewing their popular 5.5% Raj IPA for years. After a backlash on Twitter, TSA has changed the name to Rok IPA. Advertisement

evelopers plan to demolish the Old College Bar in High St. Owner Colin Beattie, the man behind Oran Mor and other outlets, says the building can’t be saved. But he pledged that a tribute to the Old College Bar would arise on the same site as part of a new development. Council sources, however, have denied the building is dangerous, with a spokesman telling the Herald the pub was “structurally sound.”

CAMRA hopes that no stone will be left unturned to preserve as much of the original building as possible.

Reports of pub’s death were greatly exaggerated I

n the last edition of the Guzzler we reported that the Carnarvon Bar on St George’s Road had closed. This was true at the time, but no sooner had the last issue appeared than the pub imme-

diately opened up again! Even better, the Carnarvon now sells real ale once more, after not having had it for the best part of ten years (But you will have to be a fan of Greene King IPA).

lasgow locals are featured in a new book from CAMRA showcasing the UK’s heritage pubs. The Laurieston Bar in Bridge St boasts a rare unspoilt 960s interior. And the Railway Tavern in Shettleston has recently been listed by Historic Scotland. CAMRA’s guide to 270 pubs of real historic signiﬁcance sees the most outstanding pubs on the “National Inventory” collated into a single volume for the ﬁrst time. ■ Geoﬀ Brandwood, Britain’s Best Real Heritage Pubs (288pp, ISBN: 978--85249-304-2) costs 9.99 and can be purchased from shop.camra.org.uk (7.99 for CAMRA members).

Pubs news ■ On the south side, the Tir Chonaill on Victoria Road is closed and The Langside has given up on selling real ale, citing poor sales. ■ New south side music venue the Glad Cafe sells real ale, but only in the back bar – ask for it and you can get it in the cafe too. ■ The Beer Cafe is selling real ale again. ■ In Oban, the Tartan Tavern has reopened under new management and is selling Fyne Ales through one pump. And the Woodside in Tweedale Street is now selling Old Speckled Hen. ■ Balloch’s Tullie Inn has re-opened after renovation. The furniture from the Tullie has been recycled in Maclay Inns’ new venture Munro’s (formerly the Captain’s Rest) on Great Western Road, adding to their portfolio of pubs in the area. ■ The Dowanhill in Partick is now The Sparkle Horse, co-run by Steven Lang from indie group Bis. West beers on tap but no real ale. More pubs are tweeting their guest beers. The latest to jump on the bandwagon are @drum_glasgow, @GlasgowsTheArk, @EdwardWylieAles, @MunrosGlasgow

■ At the Clachaig Inn in Glencoe, newly promoted bar manager Stuart Price states his intention to “create a haven of real ale surrounded by the beauty of Glencoe”. ■ Marston’s are opening their ﬁrst Scottish pubs – including one at Braehead. The Steam Wheeler should be open by the time you read this. ■ Beer bar East on London Road has closed after just a few months. ■ The Merchant (formerly Yates’), West George St, now sells real ale. ■ In Rutherglen, once a real ale desert, a new Wetherspoon pub, An Ruadh Gleann, is bringing cask-conditioned enlightenment to the town once again. ■ The Avalon in Kent Road appears to have closed. ■ The Black Bull in Killearn is under new management. ■ In Bearsden The Inn has stopped selling real ale.

■ To celebrate the 65th birthday of cellarman Ronnie Anderson, the Three Judges is running a beer festival with a diﬀerence during the West End festival. 65 diﬀerent beers, chosen by Ronnie, will be on sale. ■ Check www.glasgowcamra.org. uk for up-to-date information. Join our Facebook page facebook. com/GlasgowCAMRA, or follow @GlasgowCAMRA and @GlasgowGuzzler on Twitter

Halt Bar saved? ������ ��������� I ����������� t appears the future of the Halt Bar in Woodlands Road is more secure than it has been for quite some time. After the pub’s customers launched a campaign to stop it being gutted and redesigned, owner Punch Taverns agreed to pull back from the plans originally put forward, and promised any redevelopment would be in keeping with the character of the pub. Now the Halt has been taken on by a new management team. The pub always sold real ale, but recently with little enthusiasm or imagination. Things

■ This year’s Great British Beer Festival will take place from 13th – 17th August at London Olympia. With over 800 real ales, ciders, perries and foreign beers to choose from there will be plenty of choice to suit everybody’s taste buds! Tickets can be bought by visiting www.gbbf. org.uk/tickets Advertisement 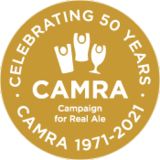