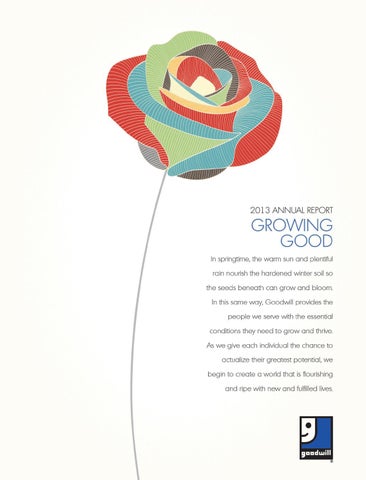 OUR MISSION Founded in 1957 as a not-for-profit, Goodwill Industries of Middle Tennessee’s mission is, “We sell donated goods to provide employment and training opportunities for people who have disabilities and others who have trouble finding and keeping jobs.”

As a freshman at

For so many of the people who walked though the

did not turn out how they had dreamed, and their

prospects for employment had reached the end of

a missionary team in Asia. His dream almost became a reality, but news that the India mission was financially strapped forced Helms to give up the India dream. In its place, Edgar would accept what appeared to be an uninspiring alternative, to serve as a settlement worker in one of Boston’s worst slums and crime centers. At the age of 32, in the dilapidated Morgan’s Chapel, Helms was enough discouraged to entertain the notion that his career might be approaching the end of the road. The end of a dream is often the beginning of a life.

In the following pages, you will not only see numbers that reflect our amazing accomplishments for 2013, but also read the emotional stories of people who discovered, like Helms, that the end of their dream was the beginning of a new life. Both the numbers and the stories convey our gratitude to you for your interest in our mission and your generous donations of gently-used items. We are committed to “Growing Good” and continuing to earn your support by making sure your gifts benefit the people we are privileged to serve.

From this broken down house of worship, Edgar J. Helms would go on to build what is today the modern Goodwill. Through his belief in giving people a chance rather than charity, Helms initiated a movement that would bring jobs and dignity to

Donna Yurdin | Chairman of the Board

thousands of individuals who have disabilities and others who have trouble finding and keeping jobs.

A YEAR OF GREAT GROWTH

Record number of dresses sold at our Wedding Gala

the job readiness program, and the retail

decades. “I had been off and on drugs, and I

had spent most of my adult life in prison.”

he needed work experience, so she found him a part-time job delivering pizzas. “I came

When Fred was released

to Goodwill looking for a

job, but they provided me

made a decision to not go

with more than that,” he said.

back. “I got sick and tired of being sick and tired,” he said. “I’ve been through a lot. I was even homeless at one point in my life.” Fred decided it was time to turn his life around. He wasn’t sure how to start over, but he thought finding a job would be a good start.

“I’m grateful to have my own business, and I wouldn’t have been able to do that without Goodwill’s help.”

“Goodwill gave me the skills I needed to take that next step.” That next step came two months later when Fred decided to fulfill his dream of becoming an entrepreneur. In June 2013, Fred opened a small restaurant in Nashville called “OohWee Bar-B-Q.” “I’m grateful to have my own

“I never really had a job, so

business, and I wouldn’t have

I knew I needed help,” he

been able to do that without

said. “I went to Goodwill,

and they helped me understand what I needed to do to make that happen.”

Fred hopes his story will inspire others. “No matter where you are in life, you can change

challenging. “My self-confidence was just

devastated, but the store staff knew what I

then the inevitable happened,” she said.

was going through and would push me that extra bit,” she said. “I never had to hide my

In 2010, police arrested Shelley for the first

past, and to have that support at a place of

time. The judge sentenced her to two years

of supervised probation and ordered her to get a job. “During my

drug addiction, I was

unemployable, so I hadn’t worked in over two years.” Shelley spent the next several months focused on conquering her addiction. She underwent seven months of treatment and attended two AA meetings every day. “Getting sober was about the hardest thing

“I never had to hide my past, and to have that support at a place of employment is invaluable.”

promotions. She is currently the lead processor at the Union City Goodwill store, and she is very happy. “Oh, I absolutely love my job, and I love Goodwill,” she said with a smile. “It’s a place for second chances, and when I see someone like me given a second chance, it makes me love Goodwill even more.”

When asked about the future,

I could go through that

Shelley said she hopes to

again, and that’s what keeps me sober.”

continue her journey through life right at Goodwill. “Working for Goodwill changed

Shortly after treatment, Shelley accepted a job at Goodwill. The first few months were

my life. There’s no place I’d rather be.”

An accident at age three left Ian with

Over the years, Ian has shown he can do

much more than that. In addition to his

would later make it difficult for him to find

greeter responsibilities, he is also in charge

work. “No one would take a

of keeping the books

chance on me,” said Ian.

organized, and he plays a

Ian had been on the job hunt for six years, and he started to get discouraged. “I was at a bad point in my life, and I was trying to figure out where I was going and what I was going to do.” That all changed in 2007 when the then 22-year-old landed his first job as the

greeter for the Goodwill

vital role in the weekly color rotation of merchandise. “I’ve proven I’m a hard worker,” he said. “You give me any task, and I will do it to the best of my ability.” Ian says working at Goodwill has changed his life. “It gives me a feeling of accomplishment and integrity, and I like being part of a team.”

store in Lexington. “My job is to make sure everyone feels welcome when they walk into the store.”

Goodwill was Ian’s first job, and he hopes it’s his last. “I love my job. I would do it for free.”

Blindness or other visual impairment

Deafness or other hearing impairment

Duplicates exist due to some clients reporting more than one barrier

United Way support and other contributions

clients were served and

were placed in jobs.

of Career Solutions clients who found work were placed in jobs outside of Goodwill.

employees and clients were on payroll as of January 1, 2014.

donors dropped off items at o ur Donation Express Centers, on average, each day.

worth of gift cards were given away to other nonprofits through our Goodwill Cares Program to assist those in need.

pounds of salvage and recyclable m aterial was diverted from landfills.

aptitudes they have for successful employment.

Instructors teach clients skills, including how to fill

and one-on-one counseling to anyone who

out an application, and give job interview tips.

Counselors provide support to clients after the

perform basic job-related tasks while the client earns a paycheck.

GROWING FORWARD As we look ahead to 2014, our goal is to serve 20,000 people and place 6,000 people in jobs. We want to thank all our supporters, donors and employees, who through their tireless efforts, are helping us impact more lives each day. As Goodwill continues to grow, so too will our mission of serving people with disabilities and helping those who have trouble finding work get the employment and training opportunities they need; and that can only lead to more good permeating our world.

Our business is changing lives. 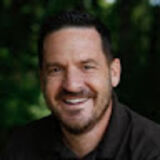