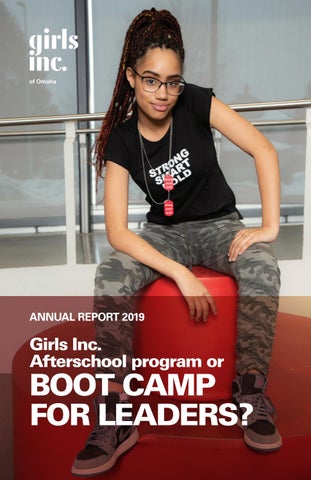 What do girls need to lead? Relationships. Voice. Positive Self-image. Intellectual Curiosity. Because we give girls tools and opportunities, they not only change their own circumstances, they will also change the circumstances of others around them. They will change the world.

Girls Inc. has given me so much and helped me go far in life. I’ve been accepted into numerous youth leadership programs, one of which flew me out to Princeton University. I am Desyreé, a product of Girls Inc. of Omaha.” - Desyreé

When girls have a strong, positive sisterhood of peers, they do better in school and in life. Likewise, they thrive when they have both formal and informal mentors to see successful, female independence up close.

My first mentor, Katie, was a single woman, a teacher, and very independent. I had never seen or imagined a female living on her own before. I knew then that I, too, could have a career and help break the cycle of teen and arranged marriages.â&amp;#x20AC;? - Asha

Our new transitional living facility, ProtĂŠgĂŠ House, opened in 201 to develop the relationships and social capital necessary to launc

19. At Protégé, young women can continue ch into independent adulthood.

Living at Protégé House, Ms. CT guides us and lets us practice our independence. She lets us make mistakes and you grow from the mistakes.” - Dorian

Girlsâ&amp;#x20AC;&amp;#x2122; thoughts and opinions matter. They are amazing advocates for themselves, for each other, and for important causes when they know how, when, and where to get their point across. Girls Inc. engages girls in externships and advocacy work, enabling them to develop their voices and build self-confidence.

Successful girls appreciate their bodies (and all kinds of bodies). They make choices that keep them healthy and allow them to manage stress. They experience the sheer joy that comes from being comfortable with themselves physically and emotionally. They are thoughtful and careful in taking ownership of their sexuality, and in making choices that will help them lead satisfying, safe, and healthy lives.

Beauty should be about self-love and self-acceptance. Girls Inc. has taught me how to be more confident and learn more about the female body. Now, at 18-years-old, I donâ&amp;#x20AC;&amp;#x2122;t let society depict how I want to look, act, and feel.â&amp;#x20AC;? - Ayriel

For girls who are ready to lead, education is not just preparation for the next milestone in life. It is a habit of mind that will allow them to learn all their lives, across all fields.

My GPA right now is only a 3.06 and I want it to be at least a 3.5 because it will create more opportunities for me and because I want to go to college for cybersecurity.â&amp;#x20AC;? - Jade-Lyn

What Does The Girls Inc. national report*, “STRONGER, SMARTER, BOLDER: GIRLS TAKE THE LEAD,” shares the progress Girls Inc. has made in addressing tough issues girls face. While there is much work to be done, researchers determined with confidence that regardless of demographic, academic, and social characteristics, girls who participated in Girls Inc. were outpacing their peers in multiple areas of success.

Self-Confidence The opportunities that Girls Inc. girls receive—whether learning about nutrition and exercise or simply developing a stronger self-image—make them more likely to participate in team sports and exercise regularly.

Relationships Compared to other girls in their communities, girls who have had the mentoring relationships and the Girls Inc. all-girl, pro-girl environment are more likely to have positive relationships with adults and see them as allies, as well as to see themselves as leaders.

Intellectual Confidence Girls Inc. girls are more likely to attend school and be positively engaged in school. In fact, their school suspension rates are 79 percent lower. They are also more likely to show an affinity and curiosity for STEM subjects, have self-confidence in reading and STEM, and see themselves in STEM careers in the future. They have higher standardized math test scores. They are more prepared for life after high school (whether college or work).

Voice Girls Inc. girls are more likely to stand up for their beliefs and for fairness, and they are also more likely to believe that they can influence and improve their local communities.

*The full report is available at girlsinc.org

First of all, the girls. at Girls Inc., the girls are powerful. They do th

Total # of girls served through outreach: 2,358

Our village. Who is in the village? The girlsâ&amp;#x20AC;&amp;#x2122; parents and family members, of course. And maybe you. Did you help provide programming? Volunteer? Make a financial contribution? Attend Girls Nite Out or Lunch for the Girls? Host a Eureka! extern at your workplace? Become a Reading Buddy? Mentor? Donate books, clothing, tickets, craft supplies, furnitureâ&amp;#x20AC;Ś? If the answer is yes, then YOU are a valued member of the village.

By attending African Culture Connection, my worldview has expanded. As a class, we danced, played drums, and made traditional art projects including, jewelry. I learned about my culture and heritage, and embraced that I am a young, strong black lady.â&amp;#x20AC;? - Teriana

Olsson was my second externship where I explored engineering. I visited the geotechnical office and tested variations of soil to distinguish which mixture would be pliable for different natural disasters.” - LaTaija

Politician, lawyer, and author, Stacey Abrams was the featured guest at Lunch for the Girls. Her advice?

Every donation counts when #BuildingLeaders

of girls say: At Girls Inc., I have a chance to be a leader.

of girls say: I am happy with how my body looks.

of girls say: I respect the adults at Girls Inc.

of girls say: At Girls Inc., I learn to make a difference in the world.

of girls say: There are adults at Girls Inc. I can depend on to help me.

of girls say: If something interests me, I try to learn more.

of girls say: The adults at Girls Inc. help me think about my future.

We regret any errors or omissions in acknowledging volunteers, supporters and those who paid tribute to others through their donations in 2019. Thanks to all the talented photographers who’ve contributed to this year’s annual report: Girls Inc of Omaha Staff, Debra Kaplan, Pumulo Kasaji, Kerri Peterson, Cynthia J. Kohll Photography, Michael Stryder MJD Photo Studio. Please forgive any unintentional omissions.

of girls say: I feel safe at Girls Inc.

of girls say: I’m on at least one sports team.