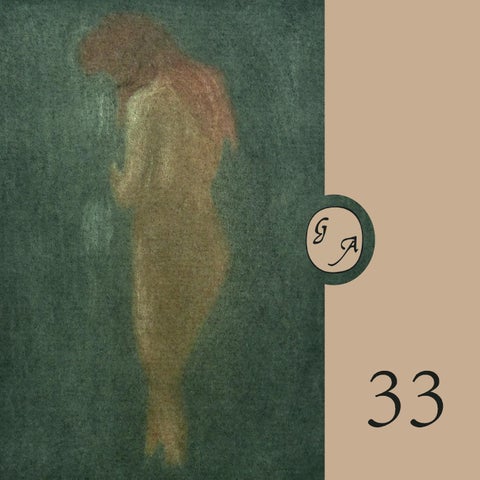 33 This catalogue was realised for the inaugural exhibition of our new gallery at 74 Heath Street in December 2013.

My journey into the art market started in a somewhat unusual way. I was living in Paris studying History of Art at the Sorbonne when my father asked me to help him with a small errand. He asked if I could bid on his behalf in the famous Parisian auction house Hôtel Drouot. I reluctantly agreed and immediately fell in love with the business. For the next two years I focused on learning how this business works, spending many hours in the established and wonderful Parisian print galleries in Rue de Seine. Each gallery was a treasure trove of wonderful art, spanning the whole Modern era, and I was able to see, feel and touch these works. An opportunity arose and I moved just across the English channel to the other European capital of art – London. Here, the art scene was very different. It was no longer filled with small, old galleries cramped with treasures, but Modern stylish spaces fashionably showing a few, yet very important works. It was after a couple years here that one day I stumbled upon a beautiful neighborhood – Hampstead. At first it didn’t feel like London at all but rather a charming English village in the countryside. I had found the right place to open our gallery. It would be warm and friendly but would present the best works by the best artists. We have been in 87 Heath Street for seven exciting and rewarding years, building a wonderful group of friends that I hope feel at home in our gallery as much as we do. But now it’s time to start a new chapter. I’m delighted to announce the opening of our new gallery. This wonderful new venue will have more than double the exhibition space and will enable us to develop even further. I’m even happier to let you know that we are not going too far away! In fact we will be just across the road in 74 Heath Street, Hampstead. Ofer Gildor

Thirty three years ago the Gildor family started dealing in art. It all began when Jacob Gildor, already an established Israeli artist, found an original Joan Miró drawing inside a book at a flea-market in Jaffa. Thus began his incursions as an art dealer. Jacob’s expertise in printmaking naturally drew him to the same medium, and he used his keen eye to begin collecting drawings and original prints by important artists of the 20th century. Today it is a family business with representatives in the United Kingdom, Israel and the United States of America. Opening the London branch was an important step for Gilden’s Arts. Ever since then the intimate gallery in Hampstead has evolved, as the art collection continues to grow. We participate in numerous art fairs through the year: London Art Fair, London Original Print Fair, Fine Art Asia, in Hong Kong, The Avenue Shows at the Armory in New York, Art Karlsruhe in Germany, among others. But we needed a place where we could spread our wings. The new gallery on 74 Heath Street, with three times the exhibition space, will allow us to display more art for your enjoyment. To mark this special occasion, we are glad to present , an exhibition featuring a selection of important works belonging to our collection. Thirty three years of experience in the art world, thirty three works that reflect this journey. They reflect not only the well-known path of the Masters such as Pablo Picasso, Joan Miró, and Marc Chagall, but also some interesting detours: Béla Kádár and Tamara de Lempicka, Keith Haring and Sam Francis. The highlight of the exhibition is undoubtedly an exquisite and rare Aquatint by Edward Munch, titled “Standing Nude“ from 1896. Come join us in these exciting new times at Gilden’s Arts. We are looking forward to welcoming you in our new Hampstead gallery! Warm regards, Daniela, Veronica and Ofer

This aquatint is an example of the artistâ&amp;#x20AC;&amp;#x2122;s very first forays into this most subtle and poetic of printmaking methods. Depicting a young nude woman with red hair standing in the dark, this remarkable work represents one of the earliest manifestations of two motifs that Munch would revisit often over the course of his career: the vulnerable woman in an interior; and the red-haired temptress. Munch created only a small number of colour aquatints over a short period of time while working in Paris, and they are amongst the rarest of all his printed works. 5

Pablo Picasso settled in Vallauris from 1948 to experiment with ceramics on the invitation of the Atelier Madoura. When Picasso was in Golfe Juan in 1946 with his friend Louis Fort, he decided to visit the pottery exhibition in Vallauris. He took a particular interest in the Madoura stand and asked to be introduced to the owners - Suzanne and Georges Ramié. They invited him to their Madoura Pottery workshop in Vallauris. There he made three pieces which he left to dry and bake. A year later Picasso returned to see how the pieces had turned out. He was delighted with the quality of the work and asked if he could make more. They agreed and an area of the workshop was arranged especially for him. So began a long and very productive partnership between Picasso and Madoura. Immediately, he began to work, inspired by his portfolio of sketches. The whole Madoura team became part of the creative process. They made sure Picasso had all the materials he needed and assisted in producing perfectly finished works of art. Suzanne Ramié shared her vast experience, teaching him all the secrets of ceramics. The works he created ranged from vases, sculptures, plaques, even to a complete dinner service. The familiar themes included bullfighting scenes, portraits and nature - goats, birds, and fish. In 24 years over 633 pieces were created in limited editions, all engraved with the Madoura stamp. We are glad to show three examples of fine ceramics realised between 1953 and 1964 at pages 9, 10 and 11. In Vallauris he found not only a welcoming place to enjoy ceramics but also to experiment with new techniques in printmaking. Artists of that time generally avoided linocut but Picasso enjoyed and mastered this printmaking technique. Pablo Picasso used linocuts to illustrate his own exhibitions from 1951 to 1964. He especially used the bullfight as a subject matter, a tradition that was very popular in this part of Southern France. The master, having enjoyed bullfights since his youth, felt at ease in the warm village of Vallauris. In the following pages we can find the linocut he realised for the annual Expo in Vallauris in 1956 and “The Old King”, a very fine linocut the artist made in 1963, when he was a mature linocut artist. 6

“Ustachi” is a Croatian word that means ‘the Rebel’ or ‘The Insurgent’. These characters appear often in Miró’s work.

A crescent moon is superimposed on a tree, rather than in the surrounding sky. Alongside the sphere, the pipe, the flute, water and clouds, the crescent is a recurring motif in the oeuvre of RenĂŠ Magritte. The Belgian Surrealist invariably rendered such elements plainly, but in strange or playful combinations that continue to fascinate to this day. The image in September Sixteenth is both trivial and impossible, and hence quite disconcerting.

The story of Daphnis and Chloe, a pastoral elegy attributed to the Greek poet Longus, dates from the second century A.D. It is a classical romance involving the adventures of two foundling children raised by humble shepherds in the idyllic setting of the Isle of Lesbos. The discovery of the infants who have been left exposed takes place at different times, but in both circumstances the clothing and rich tokens found with them suggest the foundlings may be of noble birth. In each instance the shepherd who finds the baby is alone and tempted to steal their treasure and leave them to fate, but instead bows to the paternal instinct to nurture and raise the child as his own. As Daphnis and Chloe grow to be young adults tending their

adopted parentsâ&amp;#x20AC;&amp;#x2122; sheep and goats on the sun-drenched Grecian hillsides and pastures, they discover that their friendship is turning to love but in their innocence they do not know how to carry forth. Together they experience many trials and tribulations, protected throughout by the god Pan, before finally realising their true fate. The story of Daphnis and Chloe has served through the ages as the inspiration for nearly every love story that has followed, including Romeo and Juliet.

MAURICE UTRILLO The Factories, circa1954

Béla Kádár (1877-1956) is a Hungarian master, specialising in painting and drawing. Kadar incorporated themes of Hungarian folklore and peasant life into his art. His painting style reflected many of the artistic movements of the early part of the 20th century including expressionism, constructivism and cubofuturism. Like many of the artists of his day he was drawn to Paris and Berlin, and by 1910 he had visited both cities twice. In 1923, Kadar showed his paintings in Berlin at the invitation of Herwath Walden. Walden was an important figure in the German avant-garde, being the publisher of the journal Der Sturm which featured the works of Franz Marc, Paul Klee, Wassily Kandinsky, Marc Chagall and Oskar Kokoschka. During the group exhibition at Walden´s gallery with other artists of Der Sturm, Kadar met Katherine Dreier whose Societé Anonyme was instrumental in bringing the work of the European avant-garde to New York. With her help two major exhibitions of his work were planned for the Brooklyn Museum of Art, Kadar attended the second one on September 1928.

Another impression of this woodcut can be found in the collection of the MOMA, New York.

Provenance: Private Collection, Gustav and Ottilie Schiefler, Hamburg, Germany. Gustav Schiefler (1857-1935) was a major collector of German Expressionist art with a strong focus on original prints. He is regarded a patron of true connoisseurship of art from the early 20th century. Gustav Schiefler did not only compile his collection with a keen mind, but also with heart and the right gut instinct. For a collector as passionate as him, there was no sacrifice too high to acquire an important work of art: “I set up an “etchings bank” into which I put my savings (…). When I went on walks I abstained from refreshments, I avoided using trains ...”, said Schiefler. To the art lover, however, it was not only about buying the works. He was also in close contact with the artists and gradually became an expert of the oeuvres of, among others, Karl Schmidt-Rottluff and Erich Heckel. The close connection to the artists even took him a step further, and in the end he compiled the relevant catalog raisonnés of Max Liebermann’s, Edvard Munch’s, Emil Nolde’s and Ernst Ludwig Kirchner’s graphic works. 33

This drawing comes with a letter confirming the authenticity of the work, dated 27th of February 2013, from the Galerie Henze &amp; Kettererag, Bern. This work is listed in the Ernst Ludwig Kirchner Archives, Wichtrach/Bern. Provenance: Estate of the artist (inventory no. FDrelBi41). Galerie Nierendorf, Berlin, acquired from the above in 1966. Galleria La Nuova Pesa, Rome (inventory no. 71c). Studio dâ&amp;#x20AC;&amp;#x2122;Arte Contemporanea Luca Scacchi Gracco, Rome (invetory no. 1907 1927). Finarte, Rome, 16th of June 1976, lot 269. Collection Giorgio Venturi, Florence. Christieâ&amp;#x20AC;&amp;#x2122;s, London, sale 7026, Impressionist and Modern Works on Paper, 10th of February 2005, London, lot 648, illustrated. Acquired from the above by the previous owner. 35

Provenance: This work was included in the the archive of works by Marino Marini on the 12th of April 2012. Reference numer 649. The work comes with a certificate of authenticity by the Marino Marini Foundation in Italy.

Other impressions of this etching and aquatint can be found in the collections of the Museum of Modern Art in New York, the Victoria and Albert Museum in London, the University of Michigan Museum of Art and in the Smithsonian American Art Museum. 43