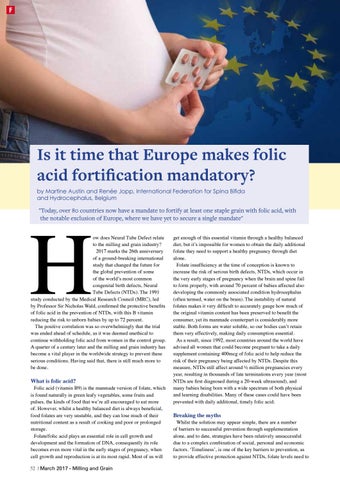 Is it time that Europe makes folic acid fortification mandatory?

"Today, over 80 countries now have a mandate to fortify at least one staple grain with folic acid, with the notable exclusion of Europe, where we have yet to secure a single mandate"

ow does Neural Tube Defect relate to the milling and grain industry? 2017 marks the 26th anniversary of a ground-breaking international study that changed the future for the global prevention of some of the world’s most common congenital birth defects, Neural Tube Defects (NTDs). The 1991 study conducted by the Medical Research Council (MRC), led by Professor Sir Nicholas Wald, confirmed the protective benefits of folic acid in the prevention of NTDs, with this B vitamin reducing the risk to unborn babies by up to 72 percent. The positive correlation was so overwhelmingly that the trial was ended ahead of schedule, as it was deemed unethical to continue withholding folic acid from women in the control group. A quarter of a century later and the milling and grain industry has become a vital player in the worldwide strategy to prevent these serious conditions. Having said that, there is still much more to be done.

What is folic acid?

Folic acid (vitamin B9) is the manmade version of folate, which is found naturally in green leafy vegetables, some fruits and pulses, the kinds of food that we’re all encouraged to eat more of. However, whilst a healthy balanced diet is always beneficial, food folates are very unstable, and they can lose much of their nutritional content as a result of cooking and poor or prolonged storage. Folate/folic acid plays an essential role in cell growth and development and the formation of DNA, consequently its role becomes even more vital in the early stages of pregnancy, when cell growth and reproduction is at its most rapid. Most of us will 52 | March 2017 - Milling and Grain

get enough of this essential vitamin through a healthy balanced diet, but it’s impossible for women to obtain the daily additional folate they need to support a healthy pregnancy through diet alone. Folate insufficiency at the time of conception is known to increase the risk of serious birth defects, NTDs, which occur in the very early stages of pregnancy when the brain and spine fail to form properly, with around 70 percent of babies affected also developing the commonly associated condition hydrocephalus (often termed, water on the brain). The instability of natural folates makes it very difficult to accurately gauge how much of the original vitamin content has been preserved to benefit the consumer, yet its manmade counterpart is considerably more stable. Both forms are water soluble, so our bodies can’t retain them very effectively, making daily consumption essential. As a result, since 1992, most countries around the world have advised all women that could become pregnant to take a daily supplement containing 400mcg of folic acid to help reduce the risk of their pregnancy being affected by NTDs. Despite this measure, NTDs still affect around ½ million pregnancies every year, resulting in thousands of late terminations every year (most NTDs are first diagnosed during a 20-week ultrasound), and many babies being born with a wide spectrum of both physical and learning disabilities. Many of these cases could have been prevented with daily additional, timely folic acid.

Whilst the solution may appear simple, there are a number of barriers to successful prevention through supplementation alone, and to date, strategies have been relatively unsuccessful due to a complex combination of social, personal and economic factors. ‘Timeliness’, is one of the key barriers to prevention, as to provide effective protection against NTDs, folate levels need to