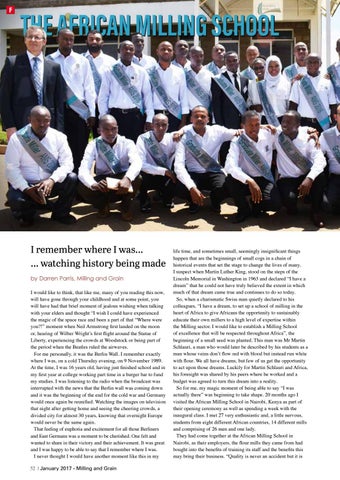 I remember where I was... ... watching history being made by Darren Parris, Milling and Grain I would like to think, that like me, many of you reading this now, will have gone through your childhood and at some point, you will have had that brief moment of jealous wishing when talking with your elders and thought “I wish I could have experienced the magic of the space race and been a part of that “Where were you?!” moment when Neil Armstrong first landed on the moon or, hearing of Wilber Wright’s first flight around the Statue of Liberty, experiencing the crowds at Woodstock or being part of the period when the Beatles ruled the airwaves. For me personally, it was the Berlin Wall. I remember exactly where I was, on a cold Thursday evening, on 9 November 1989. At the time, I was 16 years old, having just finished school and in my first year at college working part time in a burger bar to fund my studies. I was listening to the radio when the broadcast was interrupted with the news that the Berlin wall was coming down and it was the beginning of the end for the cold war and Germany would once again be reunified. Watching the images on television that night after getting home and seeing the cheering crowds, a divided city for almost 30 years, knowing that overnight Europe would never be the same again. That feeling of euphoria and excitement for all those Berliners and East Germans was a moment to be cherished. One felt and wanted to share in their victory and their achievement. It was great and I was happy to be able to say that I remember where I was. I never thought I would have another moment like this in my 52 | January 2017 - Milling and Grain

life time, and sometimes small, seemingly insignificant things happen that are the beginnings of small cogs in a chain of historical events that set the stage to change the lives of many. I suspect when Martin Luther King, stood on the steps of the Lincoln Memorial in Washington in 1963 and declared “I have a dream” that he could not have truly believed the extent in which much of that dream came true and continues to do so today. So, when a charismatic Swiss man quietly declared to his colleagues, “I have a dream, to set up a school of milling in the heart of Africa to give Africans the opportunity to sustainably educate their own millers to a high level of expertise within the Milling sector. I would like to establish a Milling School of excellence that will be respected throughout Africa”, the beginning of a small seed was planted. This man was Mr Martin Schlauri, a man who would later be described by his students as a man whose veins don’t flow red with blood but instead run white with flour. We all have dreams, but few of us get the opportunity to act upon those dreams. Luckily for Martin Schlauri and Africa, his foresight was shared by his peers where he worked and a budget was agreed to turn this dream into a reality. So for me, my magic moment of being able to say “I was actually there” was beginning to take shape. 20 months ago I visited the African Milling School in Nairobi, Kenya as part of their opening ceremony as well as spending a week with the inaugural class. I met 27 very enthusiastic and, a little nervous, students from eight different African countries, 14 different mills and comprising of 26 men and one lady. They had come together at the African Milling School in Nairobi, as their employers, the flour mills they came from had bought into the benefits of training its staff and the benefits this may bring their business. “Quality is never an accident but it is