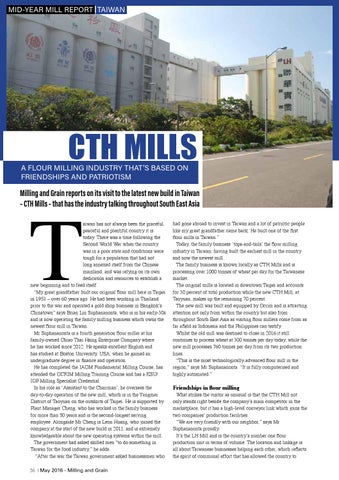 A FLOUR MILLING INDUSTRY THAT’S BASED ON FRIENDSHIPS AND PATRIOTISM

Milling and Grain reports on its visit to the latest new build in Taiwan – CTH Mills – that has the industry talking throughout South East Asia aiwan has not always been the graceful, peaceful and plentiful country it is today. There was a time following the Second World War when the country was in a poor state and conditions were tough for a population that had not long annexed itself from the Chinese mainland, and was relying on its own dedication and resources to establish a new beginning and to feed itself. “My great grandfather built our original flour mill here in Taipei in 1953 – over 60 years ago. He had been working in Thailand prior to the war and operated a gold shop business in Bangkok’s Chinatown” says Brian Lin Suphananonta, who is in his early-30s and is now operating the family milling business which owns the newest flour mill in Taiwan. Mr Suphananonta is a fourth generation flour miller at his family-owned Chiao Thai Hsing Enterprise Company where he has worked since 2012. He speaks excellent English and has studied at Boston University, USA, when he gained an undergraduate degree in finance and operation. He has completed the IAOM Fundamental Milling Course, has attended the OCRIM Milling Training Course and has a KSU/ IGP Milling Specialist Credential. In his role as ‘Assistant to the Chairman’, he oversees the day-to-day operation of the new mill, which is in the Yangmei District of Taoyuan on the outskirts of Taipei. He is supported by Plant Manager Cheng, who has worked in the family business for more than 50 years and is the second-longest serving employee. Alongside Mr Cheng is Leon Huang, who joined the company at the start of the new build in 2011, and is extremely knowledgeable about the new operating systems within the mill. The government had asked skilled men “to do something in Taiwan for the food industry,” he adds. “After the war the Taiwan government asked businessmen who

had gone abroad to invest in Taiwan and a lot of patriotic people like my great grandfather came back. He built one of the first flour mills in Taiwan.” Today, the family business ‘tops-and-tails’ the flour milling industry in Taiwan; having built the earliest mill in the country and now the newest mill. The family business is known locally as CTH Mills and is processing over 1000 tonnes of wheat per day for the Taiwanese market. The original mills is located in downtown Taipei and accounts for 30 percent of total production while the new CTH Mill, at Taoyuan, makes up the remaining 70 percent. The new mill was built and equipped by Ocrim and is attracting attention not only from within the country but also from throughout South East Asia as visiting flour millers come from as far afield as Indonesia and the Philippines can testify. Whilst the old mill was destined to close in 2016 it still continues to process wheat at 300 tonnes per day today, while the new mill processes 760 tonnes per day from its two production lines. “This is the most technologically-advanced flour mill in the region,” says Mr Suphananonta. “It is fully computerised and highly automated.”

What strikes the visitor as unusual is that the CTH Mill not only stands right beside the company’s main competitor in the marketplace, but it has a high-level conveyor link which joins the two companies’ production facilities. “We are very friendly with our neighbor,” says Mr Suphananonta proudly. It’s the LH Mill and is the country’s number one flour production unit in terms of volume. The location and linkage is all about Taiwanese businesses helping each other, which reflects the spirit of communal effort that has allowed the country to

MAY 2016 - Milling and Grain magazine

MAY 2016 - Milling and Grain magazine