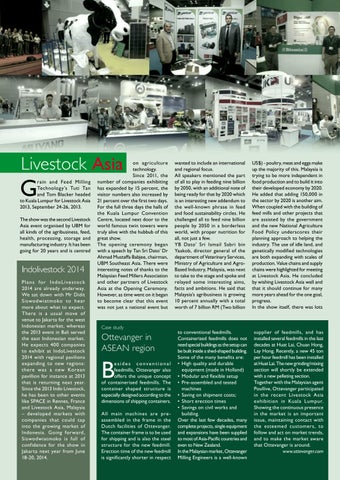 rain and Feed Milling Technology’s Tuti Tan and Tom Blacker headed to Kuala Lumpur for Livestock Asia 2013, September 24-26, 2013. The show was the second Livestock Asia event organised by UBM for all kinds of the agribusiness, feed, health, processing, storage and manufacturing industry. It has been going for 20 years and is centred

Indolivestock 2014 P l a n s for I nd o L i ve s t oc k 2014 are already underway. We sat down with Mr Didit Siswodwiatmoko to hear more about what to expect. There is a usual move of venue to Jakarta for the west Indonesian market, whereas the 2013 event in Bali served the east Indonesian market. He expects 400 companies to exhibit at IndoLivestock 2014 with regional pavilions expanding to new regions: there was a new Korean pavillion for instance at 2013 that is returning next year. Since the 2013 Indo Livestock, he has been to other events like SPACE in Rennes, France and Livestock Asia, Malaysia – developed markets with companies that could tap into the growing market of Indonesia. Going forward, Siswodwiatmoko is full of confidence for the show in Jakarta next year from June 18-20, 2014.

on agriculture technology. Since 2011, the number of companies exhibiting has expanded by 15 percent, the visitor numbers also increased by 21 percent over the first two days. For the full three days the halls of the Kuala Lumpur Convention Centre, located next door to the world famous twin towers were truly alive with the hubbub of this great show. The opening ceremony began with a speech by Tan Sri Dato’ Dr Ahmad Mustaffa Babjee, chairman, UBM Southeast Asia. There were interesting notes of thanks to the Malaysian Feed Millers Association and other partners of Livestock Asia at the Opening Ceremony. However, as time went on it began to become clear that this event was not just a national event but

esides conventional feedmills, Ottevanger also offers the unique concept of containerised feedmills. The container shaped structure is especially designed according to the dimensions of shipping containers. All main machines are preassembled in the frame in the Dutch facilities of Ottevanger. The container frame is to be used for shipping and is also the steel structure for the new feedmill. Erection time of the new feedmill is significantly shorter in respect

wanted to include an international and regional focus. All speakers mentioned the part of all to play in feeding nine billion by 2050, with an additional note of being ready for that by 2020 which is an interesting new addendum to the well-known phrase in feed and food sustainability circles. He challenged all to feed nine billion people by 2050 in a borderless world, with proper nutrition for all, not just a few. YB Dato’ Sri Ismail Sabri bin Yaakob, director general of the department of Veterinary Services, Ministry of Agriculture and AgroBased Industry, Malaysia, was next to take to the stage and spoke and relayed some interesting aims, facts and ambitions. He said that Malaysia’s agribusiness is growing 10 percent annually with a total worth of 7 billion RM (Two billion

to conventional feedmills. Containerized feedmills does not need special buildings as the setup can be built inside a shed-shaped building. Some of the many benefits are: • High quality and durable equipment (made in Holland) • Modular and flexible setup • Pre-assembled and tested machines • Saving on shipment costs; • Short erection times • Savings on civil works and building. Over the last few decades, many complete projects, single equipment and expansions have been supplied to most of Asia-Pacific countries and even to New Zealand. In the Malaysian market, Ottevanger Milling Engineers is a well-known

US$) - poultry, meat and eggs make up the majority of this. Malaysia is trying to be more independent in food production and to build it into their developed economy by 2020. He added that adding 150,000 in the sector by 2020 is another aim. When coupled with the building of feed mills and other projects that are assisted by the government and the new National Agriculture Food Policy underscores their planning approach to helping the industry. The use of idle land, and genetically modified technologies are both expanding with scales of production. Value chains and supply chains were highlighted for meeting at Livestock Asia. He concluded by wishing Livestock Asia well and that it should continue for many more years ahead for the one goal, progress. In the show itself, there was lots

supplier of feedmills, and has installed several feedmills in the last decades at Huat Lai, Chuan Hong, Lay Hong. Recently, a new 45 ton per hour feedmill has been installed at Huat Lai. The new grinding/mixing section will shortly be extended with a new pelleting section. Together with the Malaysian agent Poullive, Ottevanger participated in the recent Livestock Asia exhibition in Kuala Lumpur. Showing the continuous presence in the market is an important issue, maintaining contact with the esteemed customers, to follow and act on market trends, and to make the market aware that Ottevanger is around. www.ottevanger.com 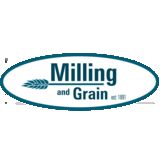