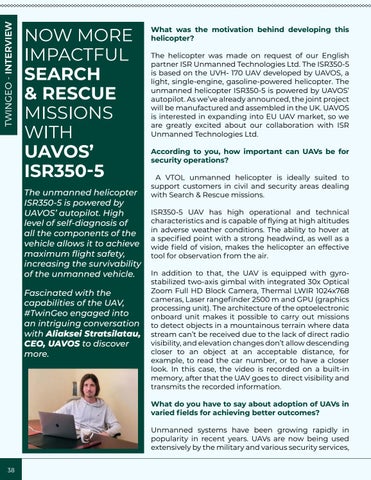 NOW MORE IMPACTFUL SEARCH &amp; RESCUE MISSIONS WITH UAVOS’ ISR350-5 The unmanned helicopter ISR350-5 is powered by UAVOS’ autopilot. High level of self-diagnosis of all the components of the vehicle allows it to achieve maximum flight safety, increasing the survivability of the unmanned vehicle. Fascinated with the capabilities of the UAV, #TwinGeo engaged into an intriguing conversation with Aliaksei Stratsilatau, CEO, UAVOS to discover more.

What was the motivation behind developing this helicopter? The helicopter was made on request of our English partner ISR Unmanned Technologies Ltd. The ISR350-5 is based on the UVH- 170 UAV developed by UAVOS, a light, single-engine, gasoline-powered helicopter. The unmanned helicopter ISR350-5 is powered by UAVOS’ autopilot. As we’ve already announced, the joint project will be manufactured and assembled in the UK. UAVOS is interested in expanding into EU UAV market, so we are greatly excited about our collaboration with ISR Unmanned Technologies Ltd. According to you, how important can UAVs be for security operations? A VTOL unmanned helicopter is ideally suited to support customers in civil and security areas dealing with Search &amp; Rescue missions. ISR350-5 UAV has high operational and technical characteristics and is capable of flying at high altitudes in adverse weather conditions. The ability to hover at a specified point with a strong headwind, as well as a wide field of vision, makes the helicopter an effective tool for observation from the air. In addition to that, the UAV is equipped with gyrostabilized two-axis gimbal with integrated 30x Optical Zoom Full HD Block Camera, Thermal LWIR 1024x768 cameras, Laser rangefinder 2500 m and GPU (graphics processing unit). The architecture of the optoelectronic onboard unit makes it possible to carry out missions to detect objects in a mountainous terrain where data stream can’t be received due to the lack of direct radio visibility, and elevation changes don’t allow descending closer to an object at an acceptable distance, for example, to read the car number, or to have a closer look. In this case, the video is recorded on a built-in memory, after that the UAV goes to direct visibility and transmits the recorded information. What do you have to say about adoption of UAVs in varied fields for achieving better outcomes? Unmanned systems have been growing rapidly in popularity in recent years. UAVs are now being used extensively by the military and various security services, 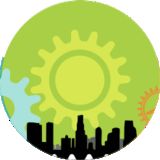