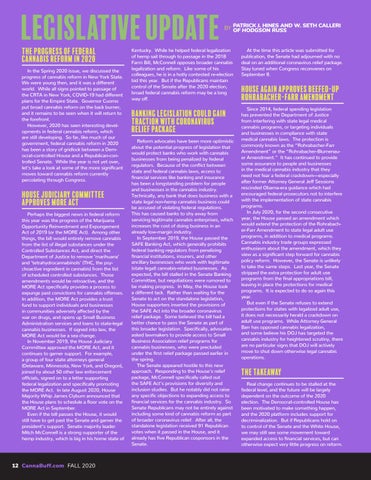 Legislative Update The Progress of Federal Cannabis Reform in 2020 In the Spring 2020 issue, we discussed the progress of cannabis reform in New York State. We were young then, and it was a different world. While all signs pointed to passage of the CRTA in New York, COVID-19 had different plans for the Empire State. Governor Cuomo put broad cannabis reform on the back burner, and it remains to be seen when it will return to the forefront. However, 2020 has seen interesting developments in federal cannabis reform, which are still developing. So far, like much of our government, federal cannabis reform in 2020 has been a story of gridlock between a Democrat-controlled House and a Republican-controlled Senate. While the year is not yet over, let’s take a look at some of the more significant moves toward cannabis reform currently percolating through Congress.

House Judiciary Committee Approves MORE Act Perhaps the biggest news in federal reform this year was the progress of the Marijuana Opportunity Reinvestment and Expungement Act of 2019 (or the MORE Act). Among other things, the bill would entirely remove cannabis from the list of illegal substances under the Controlled Substances Act, and direct the Department of Justice to remove ‘marihuana’ and ‘tetrahydrocannabinols’ (THC, the psychoactive ingredient in cannabis) from the list of scheduled controlled substances. Those amendments would be retroactive, and the MORE Act specifically provides a process to expunge past convictions for cannabis offenses. In addition, the MORE Act provides a trust fund to support individuals and businesses in communities adversely affected by the war on drugs, and opens up Small Business Administration services and loans to state-legal cannabis businesses. If signed into law, the MORE Act would be a sea change. In November 2019, the House Judiciary Committee approved the MORE Act, and it continues to garner support. For example, a group of four state attorneys general (Delaware, Minnesota, New York, and Oregon), joined by about 50 other law enforcement officials, signed on to a letter supporting federal legalization and specifically promoting the MORE Act. In late August 2020, House Majority Whip James Clyburn announced that the House plans to schedule a floor vote on the MORE Act in September. Even if the bill passes the House, it would still have to get past the Senate and garner the president’s support. Senate majority leader Mitch McConnell is a strong supporter of the hemp industry, which is big in his home state of

Kentucky. While he helped federal legalization of hemp sail through to passage in the 2018 Farm Bill, McConnell opposes broader cannabis legalization and reform. Like some of his colleagues, he is in a hotly contested re-election bid this year. But if the Republicans maintain control of the Senate after the 2020 election, broad federal cannabis reform may be a long way off.

Banking Legislation Could Gain Traction with Coronavirus Relief Package Reform advocates have been more optimistic about the potential progress of legislation that would protect banks who work with cannabis businesses from being penalized by federal regulators. Because of the conflict between state and federal cannabis laws, access to financial services like banking and insurance has been a longstanding problem for people and businesses in the cannabis industry. Technically, any bank that does business with a state legal non-hemp cannabis business could be accused of violating federal regulations. This has caused banks to shy away from servicing legitimate cannabis enterprises, which increases the cost of doing business in an already low-margin industry. In September 2019, the House passed the SAFE Banking Act, which generally prohibits federal banking regulators from penalizing financial institutions, insurers, and other ancillary businesses who work with legitimate (state legal) cannabis-related businesses. As expected, the bill stalled in the Senate Banking Committee, but negotiations were rumored to be making progress. In May, the House took a different tack. Rather than waiting for the Senate to act on the standalone legislation, House supporters inserted the provisions of the SAFE Act into the broader coronavirus relief package. Some believed the bill had a better chance to pass the Senate as part of this broader legislation. Specifically, advocates asked lawmakers to provide access to Small Business Association relief programs for cannabis businesses, who were precluded under the first relief package passed earlier in the spring. The Senate appeared hostile to this new approach. Responding to the House’s relief package, McConnell specifically called out the SAFE Act’s provisions for diversity and inclusion studies. But he notably did not raise any specific objections to expanding access to financial services for the cannabis industry. So Senate Republicans may not be entirely against including some kind of cannabis reform as part of broader coronavirus relief. After all, the standalone legislation received 91 Republican votes when it passed in the House, and it already has five Republican cosponsors in the Senate.

At the time this article was submitted for publication, the Senate had adjourned with no deal on an additional coronavirus relief package. Stay tuned when Congress reconvenes on September 8.

House Again Approves Beefed-Up Rohrabacher-Farr Amendment Since 2014, federal spending legislation has prevented the Department of Justice from interfering with state legal medical cannabis programs, or targeting individuals and businesses in compliance with state medical cannabis laws. The protection is commonly known as the “Rohrabacher-Farr Amendment” or the “Rohrabacher-Blumenauer Amendment.” It has continued to provide some assurance to people and businesses in the medical cannabis industry that they need not fear a federal crackdown—especially after former Attorney General Jeff Sessions rescinded Obama-era guidance which had encouraged federal prosecutors not to interfere with the implementation of state cannabis programs. In July 2020, for the second consecutive year, the House passed an amendment which would extend the protection of the Rohrabacher-Farr Amendment to state legal adult use programs, in addition to medical programs. Cannabis industry trade groups expressed enthusiasm about the amendment, which they view as a significant step forward for cannabis policy reform. However, the Senate is unlikely to take the same steps. Last year, the Senate stripped the extra protection for adult use programs from the final appropriations bill, leaving in place the protections for medical programs. It is expected to do so again this year. But even if the Senate refuses to extend protections for states with legalized adult use, it does not necessarily herald a crackdown on adult use programs. While Attorney General Barr has opposed cannabis legalization, and some believe his DOJ has targeted the cannabis industry for heightened scrutiny, there are no particular signs that DOJ will actively move to shut down otherwise legal cannabis operations.

The Takeaway Real change continues to be stalled at the federal level, and the future will be largely dependent on the outcome of the 2020 election. The Democrat-controlled House has been motivated to make something happen, and the 2020 platform includes support for decriminalization. But if Republicans hold on to control of the Senate and the White House, we may still see some movement toward expanded access to financial services, but can otherwise expect very little progress on reform. 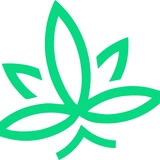