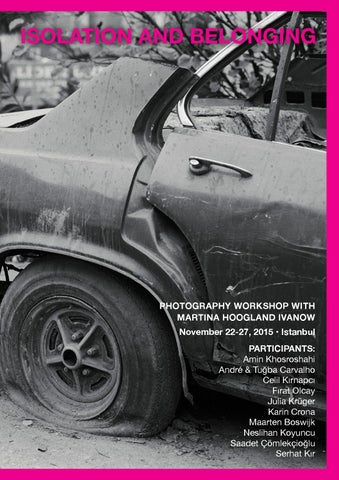 This fanzine showcases the final works of the Photography Workshop with Martina Hoogland Ivanow: ‘Isolation and belonging, working with juxtapositions in photography’ in which each workshop participant focused on a theme consistent with the title. The 6-days workshop was held within the framework of an initiation of SALT and Geniş Açı Project Office that hosts a series of photography events throughout 2015.

SALT is a cultural institution that explores critical and timely issues in visual and material culture, and cultivates innovative programs for research and experimental thinking. http://saltonline.org Geniş Açı Project Office (GAPO) is an organizational and curatorial team specialized in photography. http://www.gapo.org

Martina Hoogland Ivanow was born in Stockholm in 1973. At the age of 18 moved to Paris and later New York, to study photography, and became an established fashion photographer in London in the ‘90s. At the beginning of the 2000s decided to move back to Stockholm, where she still lives and works, in order to focus on her artistic projects. Has three published books: Far too Close (2011), Speedway (2013) and Circular Wait + Satellite (2015). http://www.martinahooglandivanow.com Amin Khosroshahi was born in Tehran in 1983. Studied Water Engineering. Is a self-didact photographer. Works as a staff photographer for ISNA (Iranian Student News Agency) since 2007. André Carvalho was born in Lisbon in 1978. Is a photographer and visual artist. Currently lives

and works in İstanbul. Tuğba Carvalho was

born in İstanbul in 1987. After studying English Language and Literature at İstanbul University, studied Photography for 5 years in Ar.Co Center of Art and Visual Communication in Lisbon, Portugal. Currently lives and works in İstanbul a photographer and visual artist. www.chromaistanbul.com Celil Kırnapçı was born in Zonguldak in 1986. Graduated from Radio, TV and Cinema Department of Marmara University, İstanbul. Works as a press photographer since 2014. Attended workshops by Eric Bouvet, Sebastián Liste, Gaël Turine, Massimo Mastrorillo, Samuel Bollendorff and Mark Steinmetz. http://salon.io/celilkirnapci Fırat Olcay was born in Ankara in 1987. Apart from being a geologist, is interested in visual arts, especially photography. Currently works on series which are developing around ways of seeing. www.fratolcay.tumblr.com

Julia Krüger was born in Bückeburg in 1987. Studied photography at the Maryland Institute College of Art in Baltimore, USA. Received her BA from the University of Applied Sciences in Hamburg, Germany. Has spent three months in Romania, doing an artist in residence in Bucharest and working on a new project about the Romanian countryside in 2015. Currently based in Leipzig. www.julia-krueger.de Karin Crona was born in Stockholm in 1968. Moved to Paris in 1999 where she currently works a photographer. Has a masters degree in Graphic Design and Illustration from the National College of Art, Crafts and Design in Stockholm and has studied Photojournalism at EMI-CFD in Paris. Is a member of Hans Lucas since 2015. www.karincrona.net Maarten Boswijk was born in Rotterdam in 1988. Attended the HKU University of the Arts, Utrecht and is currently interested in personal documentary photography and the metaphoric qualities of photographs. www.maartenboswijk.com Neslihan Koyuncu was born in Eskişehir in 1986. Has BA and MA degrees in Visual Arts from Sabancı University, İstanbul. www.neslihankoyuncu.com Saadet Çömlekçioğlu was born in Adana in 1991. Graduated from METU in 2015 and continues her graduate studies on Photography at Ankara University. Currently works on series with personal documentary approach. Serhat Kır was born in Ordu in 1983. Continues his graduate studies on Photography at Mimar Sinan Güzel Sanatlar University, İstanbul. Currently works on projects related with the themes of space, objects and portraits.

SALT WITH SUPPORT FROM 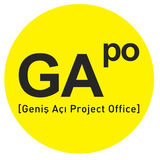 This fanzine showcases the final works of the Photography Workshop with Martina Hoogland Ivanow: ‘Isolation and belonging, working with juxt...

This fanzine showcases the final works of the Photography Workshop with Martina Hoogland Ivanow: ‘Isolation and belonging, working with juxt...