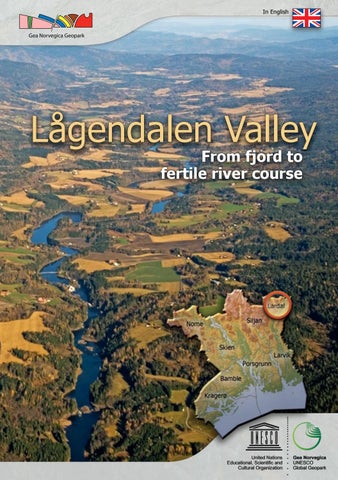 FROM LAVA TO ICE AND FERTILE VALLEY Its solid bedrock and loose sediment deposits are the main characteristics of Lardals geology. This has shaped Lågendalen Valley's landscape – with rich agricultural resources and natural qualities. The area has both a volcanic history and an Ice Age history. Volcanic bedrock Under all the loose sediments there is volcanic bedrock, formed about 250–300 million years ago. Molten magma flowed out of big volcanoes or solidified further down under the earth's crust. In some places the bedrock has been carved away by the river, but for the most part it is only visible in the valley sides and forested areas east and west of Lågendalen. Much of the bedrock that is visible is old

Rhomb porphyry. The rock type we see most of in Lardal is Gjetrang (over), which we can find for example in Kjærra Fossepark. Perhaps the most beautiful kind of rhomb porphyry is the Moen type (under). This has crystallized with star structures. Photo: Henrik Heyer

lava flows of porphyry. This magma that didn't come up to the surface solidified deep under the ground as larvikite. These two types of bedrock occur few places in the world outside of what is called the Oslo Rift, which Lardal is a part of. The Ice Ages formed the landscape During the ice ages, over the past 2.6 million years, glaciers have carved their way down into the bedrock. Today,

The beautiful canyon in Trollfoss is carved by running water, during and after the ice ages.

and this process continues today. These processes have always been active.

a river runs in the bottom of the large U-shaped valley, and the force of the water continues to shape the valley floor. Gravel, sand and clay were deposited during the periods of melting after the last Ice Age,

Lågendalen valley is the remains of a mighty fjord. When the ice receded, the fjord flooded in over the depressed land, right up to Skollenborg. The highest level that the sea reached was 170–180 metres above present sea-level, and this is called the “marine limit”. This level coincides well with the upper limit commonly used for agriculture. Here we find growing soils of high quality, and Lågendal Valley belongs to one of the country's best agricultural areas. Rich farmland surrounds the river course and testifies to the fertile loose sediment deposits that the ice age left behind.

Photo: Lågendalen valley is well known for its fishing resources, and is described as one of the most species-rich fishing rivers in the country. Salmon is especially important, and the river is often near the top of Norway's salmon catch statistics. Among the many things you can experience at Kjærra are the different traditions that exist for catching salmon.

Life on the Lågen River The Numedalslågen river is a 360 km-long river course that stretches from Hardangervidda to Larvik. The river runs right through Lardal and has supported settlement and culture for several hundreds of years. The waterway has a long history of floating timber, hydroelectric power production, agriculture, hunting and fishing, and the emergence of water-intensive industries such as mills and sawmills. Forestry is still an important source of income. The lower parts of the Lågendalen

valley have an extensive cultivation of potatoes, carrots and onions, as well as grain and oilseed crops. Carrot production, especially, has been very important and now it is one of the country's main areas for this crop. Although the raising of livestock has been greatly reduced in recent decades, Lågendalen is still a major supplier of meat and milk. In addition, it should also be mentioned that there is a large production of eggs and poultry meat. This all makes for an active cultural landscape along the waterway.