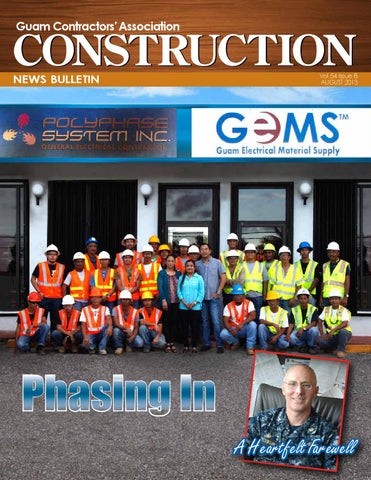 THEEDITORIALS Guam Contractor’s Association (GCA) in conjunction with AdzTech and Public Relations, Inc. publishes the Construction News Bulletin (CNB) monthly. Reproduction of materials appearing in this publication is strictly forbidden without written permission by GCA. While we always strive for accuracy, we will from time to time overlook mistakes. In order to help us improve the quality and accuracy of this publication, we ask that you take the time to look at the information provided and notify GCA of any corrections as needed. Opinions and editorial content of this publication may not necessarily be those of the publisher, staff, GCA members, GCA Board of Directors and advertisers. For more information about advertising in the GCA Construction News Bulletin contact the advertising department at (671) 477-1239/2239 or email at adztech@teleguam.net. Distributed to GCA members or can be obtained by stopping by the Guam Contractors’ Association office located at 718 N. Marine Corps Drive, Suite 203, East West Business Center, Upper Tumon, Guam. To find out more about how you can become a GCA member contact Guam Contractors’ Association at Tel: (671)647-4840/41 Fax: (671) 647-4866 or Email: gca@teleguam.net. www.guamcontractors.org Postmaster. Send address changes to Guam Contractors’ Association, located at 718 N. Marine Drive Corps Suite 203, East West Business Center, Upper Tumon, Guam.

your vision our reality At Hawaiian Rock Products, we are always ready to meet your construction needs. We have a fleet of over 200 construction vehicles and a workforce of over 300 employees. We operate state of the art facilities, strategically located throughout the island with the capacity to fulfill any project size requirements. Our vast fleet of equipment continues to expand along with the growing needs of the industry. We are here to provide you with the quality products and services you need, when you need them. 2008 Business Laureate

Building The Marianas Since 1958

SHIP HEAVY LOADS WITH NO PENALTY

ROOFING TIN ANY LENGTH UP TO 60Ft Made in GUAM, USA

“...Preserving and protecting our environment, while ensuring the highest quality care for our troops.”

Naval Medicine has a long, rich history on Guam; beginning with the arrival of Surgeon Philip Leach and Assistant Surgeons Mark V. Stone and November 2nd 1954. In 1965, the hospital began receiving casualties from 60 years of serving both military and civilian families, the current Guam Naval Hospital facility will retire next year.

Naval Hospital Replacement Project. WWO (a joint venture between Watts, Webcor and Obayashi) has been constructing the new facility which is being built to accommodate both

is scheduled to be operational by early 2014.

More can be read about Guam’s Naval Hospital history at: