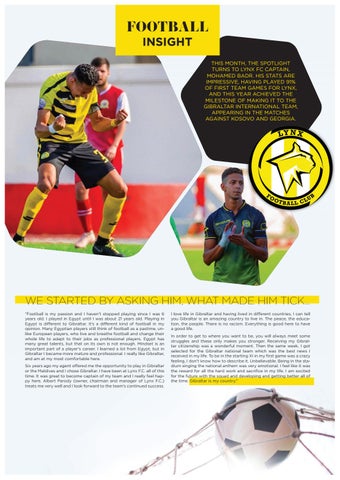 FOOTBALL INSIGHT THIS MONTH, THE SPOTLIGHT TURNS TO LYNX FC CAPTAIN, MOHAMED BADR. HIS STATS ARE IMPRESSIVE, HAVING PLAYED 91% OF FIRST TEAM GAMES FOR LYNX, AND THIS YEAR ACHIEVED THE MILESTONE OF MAKING IT TO THE GIBRALTAR INTERNATIONAL TEAM, APPEARING IN THE MATCHES AGAINST KOSOVO AND GEORGIA.

WE STARTED BY ASKING HIM, WHAT MADE HIM TICK… “Football is my passion and I haven’t stopped playing since I was 6 years old. I played in Egypt until I was about 21 years old. Playing in Egypt is different to Gibraltar. It’s a different kind of football in my opinion. Many Egyptian players still think of football as a pastime, unlike European players, who live and breathe football and change their whole life to adapt to their jobs as professional players. Egypt has many great talents, but that on its own is not enough. Mindset is an important part of a player’s career. I learned a lot from Egypt, but in Gibraltar I became more mature and professional. I really like Gibraltar, and am at my most comfortable here. Six years ago my agent offered me the opportunity to play in Gibraltar or the Maldives and I chose Gibraltar. I have been at Lynx F.C. all of this time. It was great to become captain of my team and I really feel happy here. Albert Parody (owner, chairman and manager of Lynx F.C.) treats me very well and I look forward to the team’s continued success.

I love life in Gibraltar and having lived in different countries, I can tell you Gibraltar is an amazing country to live in. The peace, the education, the people. There is no racism. Everything is good here to have a good life. In order to get to where you want to be, you will always meet some struggles and these only makes you stronger. Receiving my Gibraltar citizenship was a wonderful moment. Then the same week, I got selected for the Gibraltar national team which was the best news I received in my life. To be in the starting XI in my first game was a crazy feeling, I don’t know how to describe it. Unbelievable. Being in the stadium singing the national anthem was very emotional. I feel like it was the reward for all the hard work and sacrifice in my life. I am excited for the future with the squad and developing and getting better all of the time. Gibraltar is my country.”

The #November edition of #GBZinsight has landed, featuring an incredible cover photo by David Parody. In this issue, we chat to the chef's acclaimed by the AA Restaurant Guide, engross ourselves in the #Gibraltar Literary Festival, look back at Gib's tank regiment, plus all your favourite community, business, tech, motoring and health news. Not forgetting Mum On The Rock, Mama Lotties AND MUCH MORE! 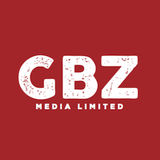