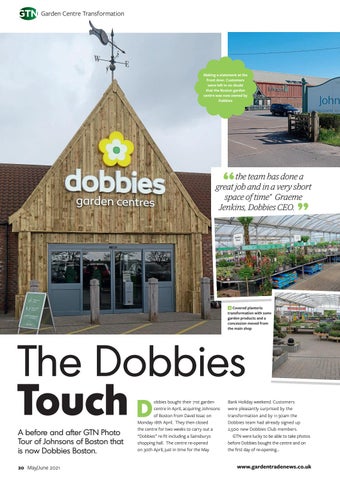 Making a statement at the front door. Customers were left in no doubt that the Boston garden centre was now owned by Dobbies

the team has done a great job and in a very short space of time” Graeme Jenkins, Dobbies CEO.

The Dobbies Touch D A before and after GTN Photo Tour of Johnsons of Boston that is now Dobbies Boston. 20 May/June 2021

obbies bought their 71st garden centre in April, acquiring Johnsons of Boston from David Issac on Monday 18th April. They then closed the centre for two weeks to carry out a “Dobbies” re-ﬁt including a Sainsburys shopping hall. The centre re-opened on 30th April, just in time for the May

Bank Holiday weekend. Customers were pleasantly surprised by the transformation and by 11:30am the Dobbies team had already signed up 2,500 new Dobbies Club members. GTN were lucky to be able to take photos before Dobbies bought the centre and on the ﬁrst day of re-opening…