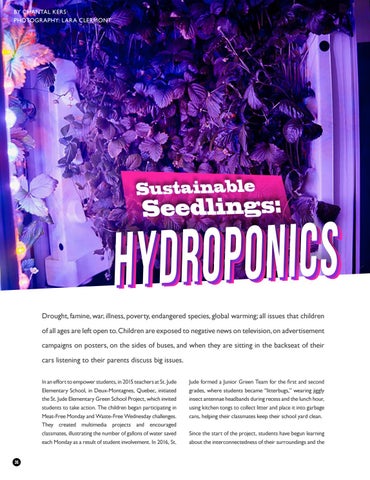 s c i n o p o r d y H Drought, famine, war, illness, poverty, endangered species, global warming; all issues that children of all ages are left open to. Children are exposed to negative news on television, on advertisement campaigns on posters, on the sides of buses, and when they are sitting in the backseat of their cars listening to their parents discuss big issues. In an effort to empower students, in 2015 teachers at St. Jude Elementary School, in Deux-Montagnes, Quebec, initiated the St. Jude Elementary Green School Project, which invited students to take action. The children began participating in Meat-Free Monday and Waste-Free Wednesday challenges. They created multimedia projects and encouraged classmates, illustrating the number of gallons of water saved each Monday as a result of student involvement. In 2016, St. 36

Jude formed a Junior Green Team for the first and second grades, where students became â&amp;#x20AC;&amp;#x153;litterbugs,â&amp;#x20AC;? wearing jiggly insect antennae headbands during recess and the lunch hour, using kitchen tongs to collect litter and place it into garbage cans, helping their classmates keep their school yard clean. Since the start of the project, students have begun learning about the interconnectedness of their surroundings and the

Hydroponics in the classroom, Vapour Pressure Deficit, The Plant Whisperer and so much more! 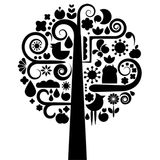